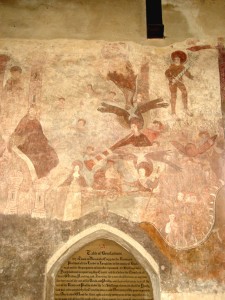 As you enter the church through the medieval south door, the first painting you see is that of the Last Judgement over the north doorway opposite. An imposing figure sits on the left, with an onlooker high on the battlements between the towers above. The Jaws of Hell, complete with lost souls, are to the right, below an angel blowing the Trump of Doom. Between the two, souls are being weighed in the balance by St Michael, and Our Lady is intervening on behalf of one of them by pressing down the pan of the scales so that his good deeds at least appear to outweigh the bad. The upper part of the painting is rather indistinct, but an angel with a huge sword can clearly be seen and there is the lower part of a large figure – possibly God the Father or our Lord.