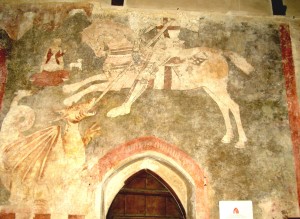 This painting shows St.George – the Patron Saint of England – on a magnificent horse, his lance already part way down the dragon’s throat. The dragon is particularly fine having a second head in its tail. The princess with her small white dog waits demurely in the background. St.George unfortunately lost his head when the roofline was altered, presumably at a stage when he was covered in plaster, but the painting is nevertheless dramatic.