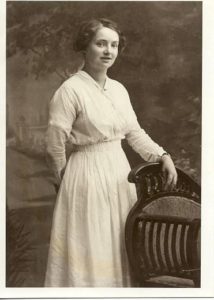 Calverton School with Headteacher’s House beyond 1908

Thinking back, I was 4 or 5 years old in 1900 and in school. Children started school at three years old in the smaller room, the larger room was for “standards”, grades 1 through 6 or 7. There was a coal stove in the larger room, but I remember it being chilly in our small room. We used the outdoor “W.C.” for our constitutionals.

School started at 9:00 a.m. with religious training until 9:45, with the Minister often coming in to take the class. We were taught how to knit and darn socks, how to hem and patch. There was a hot meal provided at our lunch break from 12 until 2:00 pm. For singing training a “squeaky harmonium” was our only musical instrument.

At Year’s end two prizes were given, the Bishop’s prize, which was a Bible, and a Hymn and Prayer book.

A highlight was our Christmas Tree Concert. We went to school dressed in our best, carrying our mugs and spoons. The Minister and teachers would engage us in fun games followed by tea.

Then we would gather around a stage, which held a sheet on a wire. The sheet would be pulled back to expose a wondrous Christmas Tree, all decorated with tinsel and candles. A gift for each of us children was tied on the tree, and the Minister’s wife would cut the ribbon and present us with a treasure. Prizes were given for the games and off to home, happy and contented. 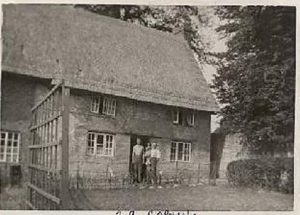 The Clark Family home at No 29 Lower Weald

Most children left school at age 12 to enter the workforce. Young ladies walked to Stony Stratford, mostly employed as servants, every day except Sundays.

Boys and some girls got work at the L.N.W.R. railway works in Wolverton, where my dad was employed. In summer most bicycled to work, in winter there was the “Penny Train” from Stony Stratford. Work started Monday through Friday at 6:00 am until 5:30 pm and on Saturdays until noon.

There were no alarm clocks so “The Knocker Up”, our neighbour man used to wake up dad at 4:30 am. My dad’s wages were 15 shillings a week (£0.75) of which rent for our house (29 Lower Weald) was 2 shillings and 6 pence. (£0.125) a week. With what was left he had to buy, coal for heating, coal oil for lighting, and food and clothing for the eight people in our family.

Dad mended all our boots, grew vegetable plants in glass-covered frame which he would sell for a few pennies at Wolverton Works. He kept pigs as with most other families, and made some money in the village, butchering for others. Once in a long while he would kill one of our pigs and make lots of treasures like, blood pudding, sausage, ham and bacon, and our substitute for butter, which we couldn’t afford, “lard”.

We could purchase milk from the Manor Farm for a penny, and sometimes a rabbit for a shilling. Mother would make rabbit stew and dumplings, which would last for many meals.

In our garden there were vegetables, gooseberries, currants, and one poor excuse for an apple tree, that would provide us children one apple each a year. We children would be tasked to collect sticks from under trees to start fires and make “spills” of tightly rolled up newspaper to save matches.

No one had “store bought” toys, just anything our parents could make for us. We really never missed them as no other children had them either.

On Sunday we had a roast with baked potatoes and Yorkshire pudding. There was a public oven in Calverton where people often took their dinners to be cooked while they were at Church. There was a village pump a short distance from our home. Dad fashioned a yoke for his shoulders to carry two pails for drinking and cooking. For washing there was a wooden bucket which caught the ever present rain water. We didn’t have washing machines, but did have an arrangement called a “dotty” with three legs and a handle which you pulled back and forth to wash the clothes.

No mothers ever went to a hospital to have their babies. Instead, a lady, “The Monthly Nurse”, would come to our house to assist in the birth. If we had a sore throat we were taken to the Doctor in Stony [Stratford], who would paint our throats with Iodine, (perish the thought). Medicine was purchased for one or two pence at the dispensary. 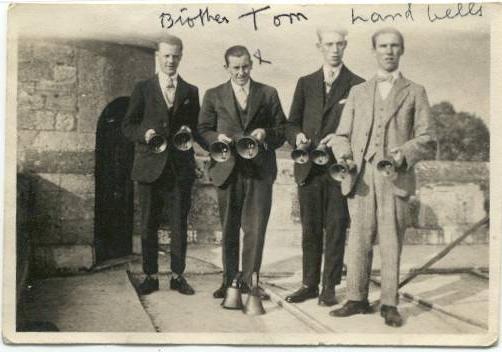 We had a lovely church in Calverton, the “All Saints” Anglican, with a peal of eight bells, which rang every Sunday and at times of importance. Most parishioners went to church both morning and evening. During Lent children went to church an hour before school.

When in surrounding towns I remember the Lamplighter, with his long handled turnkey, for turning on the street light.

An Organ Grinder came through the village now and then pushing the organ in a “Barrow”. He mostly only had one tune and played hoping for pennies. When happenings of importance needed to get out to the village a “Town Crier” would come through with his loud bell and booming voice.

There were no “Motor Cars” back then, just horse and buggy. The baker came from Stony Stratford twice a week, and a grocery horse and van came on Saturdays. Once in a long while dad would buy a bottle of ginger beer which was divided among us, how good it tasted. As well a neighbour always had a few bottles of “sweets” for anyone who had money.

What little money we could put aside went into a box, to be opened when the Yearly Fair that arrived in August. We looked forward to the excitement and cheap rides. Passenham, a short way from home was where one went to see the flour mill grinding wheat, or watch the sheep be shorn. How pitiful the poor things looked after the job.

I remember Saturdays. The huntsmen used to gather at the “Shoulder of Mutton” pub. They looked so smart in their red or black, with horse and dogs to go fox hunting. The ladies wore a riding habit and sat sidesaddle. We children would follow them until we became too tired, but it was a sight to behold.

Oh to be a child again

We used to play in a field in front of our home called “The Meadow“. A small brook ran through it which froze in the winter and we used to slide on it in a long line, one after the other, Very little snow, but cold sleet and wind. 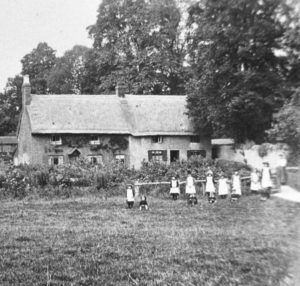 Children in ‘The Meadow’ early 1900s with Clark family home behind – accessed via footbridge over stream just visible on extreme right.

We used to roam the fields looking for nuts and berries to eat. There were, walnuts, beechnuts, hazelnuts, and “haws” which came after the May blossom died. In fall [autumn] there were blackberries to be picked. We had a pail and a hook on the end of a long stick to pull the berries down to our level, as the hedges were so high. They were plentiful and we could get a few pence by selling them. Also there were scads of mushrooms, these too we could sell easily.

In “The Meadow”, there would be first Celandines, then Buttercups, and Daisies on the Hedges, Black Thorn and then May Blossom.

Some of our song games were these:

On May Day we were up early to pick all the flowers we could find to decorate a doll buggy and put a doll in it. We took it around the houses and sang this song for a few pennies:

A BRANCH OF THE MAY I HAVE BROUGHT YOU,
AND AT YOUR DOOR IT STANDS.
IT’S WELL SPREAD OUT, IT’S WELL SPREAD ABOUT,
IT’S THE WORK OF OUR LORD’S HANDS.
I HAVE A LITTLE PURSE IN MY POCKET,
AND IT OPENS WITH A GOLDEN KEY.
ALL I WANT IS A FEW HALF-PENCE,
TO PUT IN IT FOR ME.
AND NOW I’VE SUNG MY LITTLE SHORT SONG,
NO LONGER CAN I STAY.
GOD BLESS YOU ALL, BOTH GREAT AND SMALL,
AND I WISH YOU THE MERRY MONTH OF MAY![/one_half]

ALL THE BIRDS OF THE AIR
FELL SIGHING AND SOBBING
WHEN THEY HEARD OF THE DEATH
OF POOR OLD COCK ROBIN! 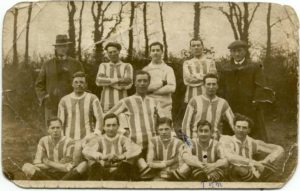 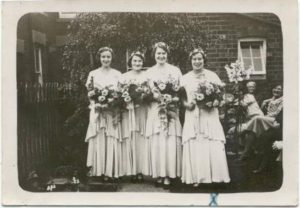 She had four sisters, Clara, Rose, Alice, Mary, and one brother Tom. 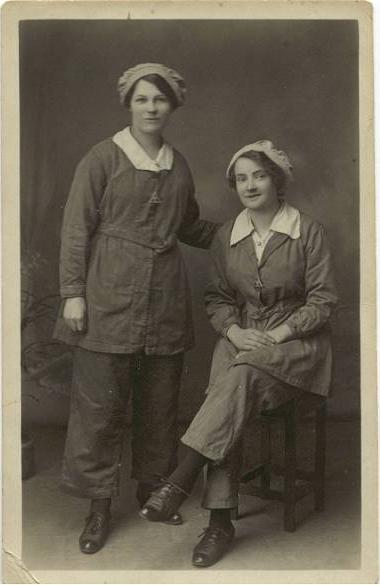 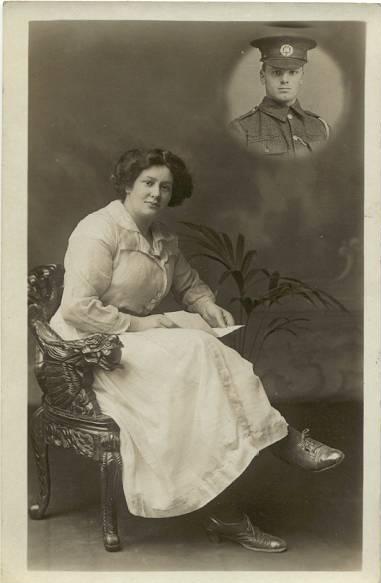 Laura’s sister Alice during Great War (with Husband Harry -inset)She started work at the age of 12 as a servant, and then as a baker’s helper. When the Great War broke out she worked in a munitions factory in, I would assume Wolverton , where she met and later married William Bazell.

They emigrated to Canada in the 1920’s and eventually settled down in Vernon, British Columbia, in the heart of the Okanagan.

She passed on in 1980 surrounded by her loving family.

There are many blanks in her life and of her family in Calverton, which we continue to seek information on, so that her memory can live in our family forever.