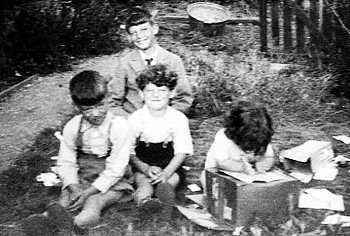 Maurice Goss (on left) as a boy with his siblings

In the summer of 1939 there was much talk of war. Army manoevres were passing through the village. Dad was made chief air raid warden and we were allocated a telephone. Dad called a meeting (in the middle of the road) to discuss the building of an air raid shelter. It was agreed to build it at the bottom of our garden. 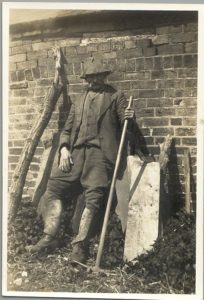 Grampy Morgan, a charming old Welsh farmer living opposite, declined to help, saying he would stand in the hollow tree in the rickyard if the bombers came. Dad tried to remind him of the fate of trees in the Somme in the First World War but he was adamant.

A start was made on the shelter on the following Saturday morning. People arrived with spades and barrows. The sides of an old henhouse were sunk into the ground for walls. Tea was provided and a good start was made, but enthusiasm dwindled rapidly. Before the roof was ever finished the war had ended.

The bombers did fly round though. Three times on alternate Fridays bombs fell around our farmhouse – four pancake bombs filled with shrapnel leaving shallow craters. An oil bomb failed to ignite, but two weeks later four bombs fell in a nearby paddock, shaking our house and filling it with dust from falling plaster. The third raid was incendiaries which started several small fires which were soon put out with stirrup pumps. 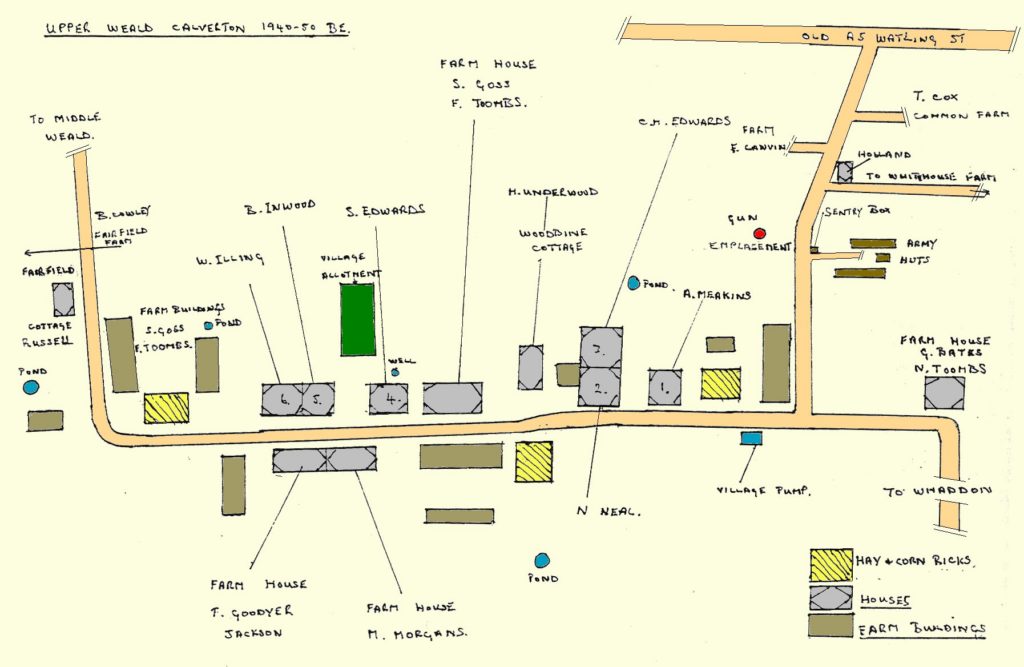 The Friday raids were very convenient for us children. It meant we were first on the scene next morning collecting souvenirs to trade at school on Monday.

Our house being the ARP post was home to the sand buckets and stirrup pumps. It was also open house to anyone living alone and afraid of the bombs.

One family of  five in three generations stayed almost every night for one winter, leaving a florin on the table when they left. We also had a soldier from Whaddon, his wife and baby in one bedroom.  Our family numbered eight at that time, which meant most nights we were were sixteen in our three bedroomed house.

These were times for great gossippings. The older men sat round the table wreathed in pipe or tobacco smoke, analysing the usually grim news of the war and talking endlessly about their own exploits in the previous war.

When the siren sounded we had to wait ten minutes for the chief ARP warden of the area, Mr Billy Toms, my headmaster, to get to the Stony Stratford headquarters from his home in York Road – or more likely from the Conservative Club. We could then telephone him to report formally that the Calverton post was manned.

The billeting officer for the evacuees came round to every house to see how many each place could take. This was decided on the rooms available, and not on the ability to look after children.

Soon the buses arrived with diamond pattern sticky tape on the darkened windows, discharging bewildered children, viewed with much suspicion from us local boys. Reverend Ravenscroft set up a club for them twice a week in the old schoolroom, but this did nothing to  integrate them as he would not let the locals join.

We already had signalling masts in the fields to do with the secret wireless station at Whaddon, but suddenly the war office decided it wanted all of our land in ten days, which led us to leave the village in the Spring of 1942 and move to Weston Underwood where I am to this day.

Feedback form for Calverton in WW2