Julia Bowtell tracks down the Lacemakers of Calverton and starts to uncover the social structure of the village whilst Jennifer Cooper finally answers Julia’s plea for more information on some of the other Calverton Lacemakers.

Back in 1997, this article was one of the very first completed as research for the Calverton Records Project and appeared in first Calverton Records Journal under the title of ‘Making sense of the Census’  Julia’s plea for more information on the lady lacemakers of the village was finally answered some 20 years later by Jennifer Cooper who lived in the village as a girl and is a lacemaker herself. Her contribution comes at the end of Julia’s piece.

The phrase “the lacemaker of Calverton” leaped out of the book at me. ‘The’ lacemaker – was there only one? I had thought that most village women supplemented their income in this industry. More to the point, did the lacemaker live in my cottage? 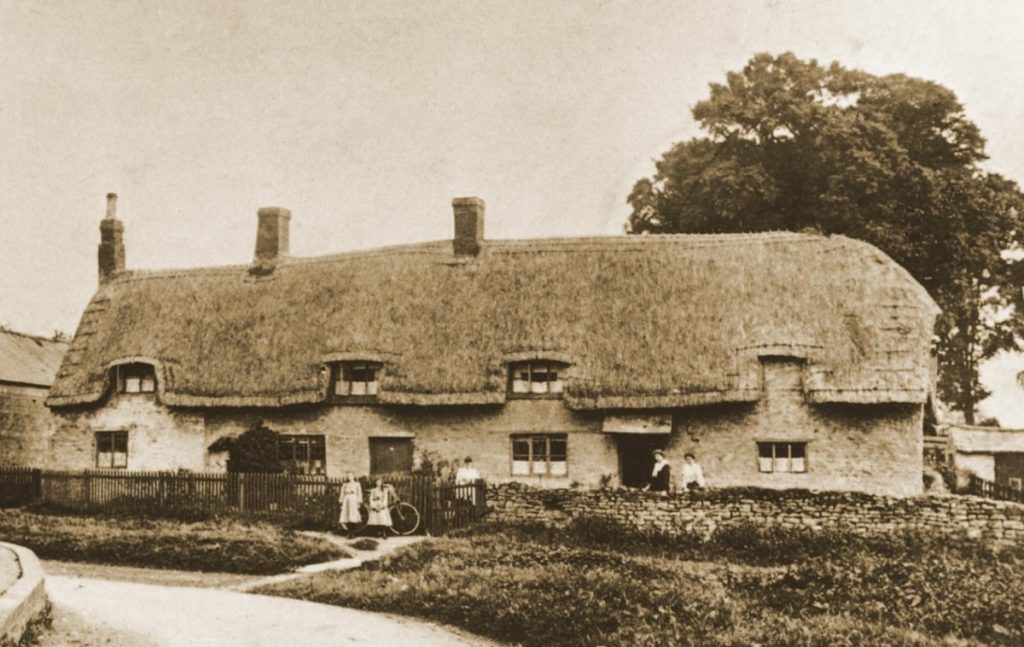 My project began. I went to the Aylesbury Records Library. The helpful librarian suggested that I should start with the 1881 census – this was one of those already transcribed. From a huge set of drawers she pulled out two reels of film. If you have not seen a census before you may be interested to know that each page of the original census has been photographed and put onto a miniature cine-film called micro-film. The same process has been completed for the transcribed copy. I was exploring new territory here! The librarian fed the micro-film into the viewer and departed. With mounting excitement I adjusted the lens. Dismay! I could not read it very easily – it was the original text. Panic! The librarian was lost between shelves. How should I change to the transcribed reel? Luckily, another micro-film user came to my aid. I adjusted the viewer again. Magic! I was transported to 1881 with the first entry for Calverton, Two Mile Ash, Mr Hopkins and his family.

Looking down the list of occupations, I came to ‘the lacemaker’. No – there were two, nay three – but no more. Had one of them lived in my cottage? There were no numbers to identify the cottages and houses. It was then that I remembered postage stamps. When they were introduced in 1840 mail increased dramatically. There became a greater need for town houses to be numbered, but in villages everyone knew their neighbours. The census officer had simply started in Upper Weald and worked his way down the Wealds to Stony Stratford, marking ‘//’ beside each head of the household. The only clues to which side of the road he was visiting were the names of the farms. All three lacemakers lived in Upper Weald – ANN and EMILY SHREIVES, unmarried sisters aged 44 and 38, and ELIZABETH TOMKINS, 71, who lived with her husband, an agricultural labourer. I still did not know who lived in my cottage, but at least I had found some lacemakers.

A example of buckspoint lace

So, what were the women in the Wealds doing with their lives? Many women had large families. In 1881 there were 15 families, each with between 4 and 7 children. Today the largest family in Calverton has 3 children.

Comparison between 1881 and the present day is difficult because I have no 1997 census. I can only estimate the annual figures for both men and women. I think this still gives a clear picture of trends in jobs and working patterns.

In 1881 MARY JOHNSON is the only woman to have a recorded occupation as a farmer. There are 13 other women – ie wives, daughters, sisters or widows – recorded without an occupation, but everyone is aware that farming is usually a partnership and the wives are often called upon to help. However, I must assume that occupation means ‘paid’ employment, and I have therefore counted today’s farmers’ wives as not working, on the same basis as the 1881 census. 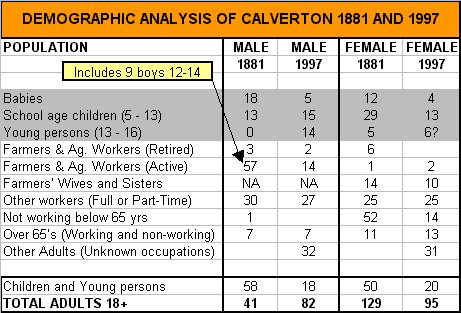 Most women employed in 1881 were in their teens and twenties and worked as dressmakers, servants or ladies’ maids. Only MRS BULL (aged 61), recorded as a laundress and ELIZABETH TOMKINS, the lacemaker, were older. Six women were recorded as former agricultural labourers. Approximately a third of the total workforce aged between 14 and 65 worked at that time. Today I estimate that over half this age group are working full-time or part- time. Women working today, either full or part-time, have a larger variety of jobs as a result of better education and greater mobility generated by car ownership. The advent of electricity has allowed a longer working day but has made most household jobs much easier.

I decided to look at the children in the Wealds. I wondered whether parents had kept the girls at home to help after they left school at 12. Out of nine 13-16 year old girls, only two worked – one as a servent, the other as a pupil-teacher. She was obviously needed as there were 35 girls in the local school, ranging from GERTRUDE WALDUCK aged 3 to EVA STRANGE aged 12. Eva was one of 8 other children orphaned, adopted or boarded in the Wealds. Since all of these children were born in London, it appears that there was a well organised placement agency for children without parents.

The Wealds must have been very lively with children at that time. After the Compulsory Primary Education Act was passed in 1870, Calverton School could have been very crowded, with a possible 46 pupils attending in 1881. This left 28 babies under 5 at home. Most of their fathers or brothers (48) would have been farming in some way, with a few being recorded as carpenters, coachmakers etc. Out of a population of 79 working males (aged 12 to 70), only 4 were recorded as working on the railway and 4 in a factory.

Today, unlike many villages in England, Calverton’s population has decreased since the 19th century, but in line with other rural communities, fewer residents work on the land.

Just before going to press I was given the 1851 census (pre the Education Act). Glancing through it to look for lacemakers, I found 17 paupers (ex-lacemakers), 73 recorded lacemakers, of whom little HARRIET READ and ELIZA HATTON were only 6 years old.

I had looked at the wrong census – someone must have been making lace in my cottage. Imagine being bent over the lace pillow, in the winter months, straining to produce intricate patterns by dim candlelight. 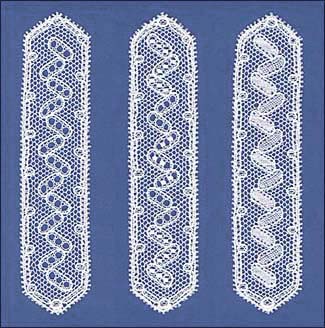 “Bucks Point” lace comprised many different patterns, each with a fine honeycomb pattern background. It was considered exquisitely delicate and used for dresses and hats. Calverton and Whaddon had a speciality in making long bookmarkers about 1.5 inches wide with mottos like REMEMBER ME with the spaces being filled with Bucks Point. When completed the lace was sold to local dealers, who often illegally traded groceries or drapery as payment instead of cash.

I have since found that it was not until 1867 that a Workshops Regulation Act stated that ‘no child could be employed in a handicraft under the age of 8 and children between 8 and 13 could only work a half-time system’ (difficult to enforce in scattered villages). However, the main reason for the collapse of the lace trade was the intense competition from cheaper, machine-made lace in the 1870’s. This caused the cottage industry almost to disappear by the time of the 1881 census.

I would still like to find out where each family lived in the Wealds, lacemakers or not. If you do know the names of ANY previous occupants of your house, please let me know. This could be really helpful in building up a picture of changing life in the three Wealds.

As described above, the output of the Lacemakers was sold to dealers for for cash or exchanged for goods or groceries, so it is almost impossible to attribute any surviving examples of lace to a particular lacemaker. However the long lacemaker’s bobbins that they used were sometimes inscribed with their names and could, in time, become family heirlooms. As a final postscript to Julia Bowtell’s article, Jennifer Cooper (nee Bull), recounts how she acquired the bobbin of her 2x great Aunt Martha Whiting Bull.

Martha Whiting Bull was born on 21 Jan 1848, in Calverton, daughter of Thomas Bull and Jane Read.  In the 1871 census she is described as a Lacemaker aged 23 and living  with her parents and two younger brothers Frederick 13 and Amos 11.in a cottage which I believe was No 9 Middle Weald, Calverton.  Her Father and both boys were described as Agricultural Labourers as were many of their neighbours, whereas the womenfolk were more likely to be Lacemakers like Martha.

The lacemaker’s bobbin shown above was made by James Compton, a well-known bobbin maker, of Passenham. This was verified by a bobbin expert in the UK.  I believe it was possibly a gift for Martha’s 21st birthday? 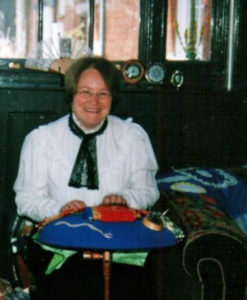 The inscription reads: Martha Whiting Bull Calverton 1868.  Because the bone stem of the bobbin is so narrow, it is inscribed in ‘pricked out’ letters set between two spiral lines. It is therefore necessary to twist the bobbin round between your fingers in order to read the inscription.

The bobbin came into my possession in 2005 when an American contacted me through my family history research. He had six bone bobbins he wanted to sell and had ‘googled’ the name. As a lacemaker myself  I agreed to purchase all six as I wanted the family bobbin to come home. I have no idea how these bobbins came to be in the U.S. as Martha lived locally all her life and died in Stony Stratford in 1911. One can only assume it was sold after her death.  I cannot describe the feeling of holding the bobbin that had once been used by Martha and possibly also handled by my 2x great grandmother, Jane.

Thomas and Jane Bull are both buried in All Saints Churchyard. I have yet to find where Martha was laid to rest…