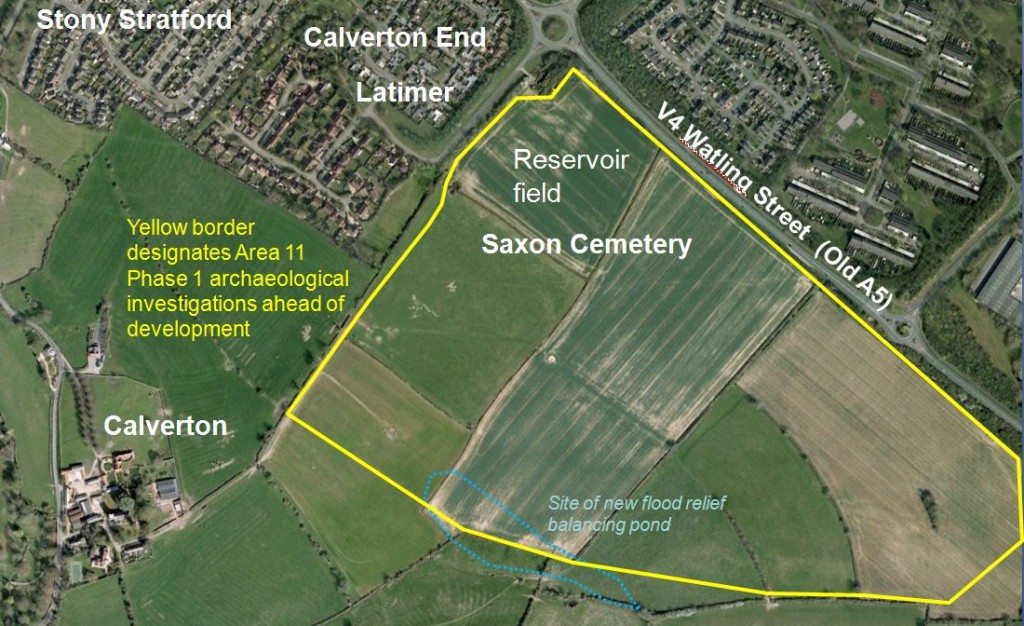 Another highly unusual archaeological find was also uncovered in another part of the development site near the reservoir field – a multi-period burial ground where human remains were accompanied by iron knives, blades and beads.

Evidence of field ditches and boundary features was also revealed. Three further graves have also been found in addition to the 20 already excavated in what has been described as a multi-period burial ground where human remains were accompanied by iron knives, blades and beads.

Viking burial with sword laid alongside the body.

The graves include those of Iron Age, Romano British and Saxon dates, suggesting that the location of the burial ground may have been focused on an earlier a Bronze Age burial mound which was considered a sacred place.

More recently, Border Archaeology have been carrying out a stripping back and mapping exercise covering the Northern part of Area 11 extending SE from Calverton End. Large scale stripping has been the only way to reveal the dispersed features which did not show up during trial trenching of the area.

Two further deep pits have been found which are believed to be wells of a similar type to those found in the South of the Western Expansion Area towards Crown Hill. These new pits have been half-sectioned and reveal upper profiles of some 450 becoming steeper towards the bottom which descends to the water table. Both pits were subject to final detail examination early in 2014 but no significant finds have come from them. Both wells were located some distance away from the settlement area which were defined by the remains of a small group of typical round houses.

The area is now being developed for housing (2019).