JUBILEE OF THE BUSINESS 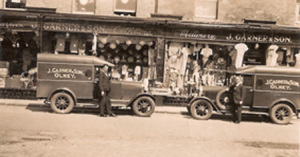 As reported in The Bucks Standard dated Saturday, August 2nd 1936.

HOW THE BUSINESS HAS GROWN

Yesterday (Friday) Mr J J Garner completed fifty years in business as a draper and outfitter in the historic town of Olney, and he is celebrating, with Mr Tom Garner, his son, who is in partnership with his father, the interesting and unique occasion by a gigantic sale in which bargains are offered not only in men’s and women’s wear but in those articles of furnishing so essential to give comfort and happiness to the cottage dweller and to those living in larger homes.

There is something strangely romantic about the business career of Mr Garner; in the early days when quite a young man with the responsibilities of business resting heavily upon him, he dreamed dreams of future progress, of the possibilities that might come for development and extension of his undertaking to cope with the demands of the shopping public of Olney and the surrounding villages. By his own industry, and by his desire to give the public quality and value for the money they had to spend, he has seen the accomplishment of his highest ambitions and today his business establishment is one of the finest in Olney. The moderate sized shop of half a century ago has been extended, and what in those days was a linen drapers only, now adequately caters not only for the bodily needs of the ladies, but has a finely stocked department for men’s outfitting, and also a department solely devoted to house furnishing. The departments all connect with each other on one floor, whilst above Mr Garner has one of the best showrooms in the district.

Mr Garner is a Bucks man, and he is proud of it. Born at Newport Pagnell, he was educated at the British School in that town, and has happy recollections of school-masters Rose, Sims, Bostock and Taylor. In 1877 he won one of the first scholarships for free education for three years. But part of the scholarship was forfeited by his determination to enter upon a business career at the age of 12. His first place was at the printing establishment of the late Mr Joseph Simpson in the High-street, where he was employed at the time of the great fire in Newport Pagnell, when the premises were burnt down and serious damage done to adjoining property. Removing to Buckingham about the year 1880, he was for six years with Messrs Allen & Vyle, drapers, etc., and the knowledge he acquired there stood him in good stead, when, on August 28, 1886, he moved to the premises in the Market Place at Olney, to be himself a business man on his own account, and where he has since taken such a prominent part in the trading affairs, and been happy to give assistance in the advancement of the town of his adoption in so many ways.

Garner’s Memo heading from the 1930s

The conditions prevailing for shopping in those early days have changed vastly. As he aptly puts it, ‘There is no father bringing mother with the children and buying something for all today. The children and young people buy their own. Then, again, wages are so different, and the facilities for transport are much better. There were no buses when I started in business, and to get from Olney to Newport Pagnell one had to hire a pony and trap, and those conditions prevailed for a very long time. Now people can get about quickly and in comfort.’

This much respected business man recalled that when he first came to Olney there was no Midland Road, no large factory at the corner, the streets were only paved in patches – cobble stones predominated – there were no sanitary arrangements, no water works, no electric light. In those days people crossed stiles, over fields to get to the railway station, and much of the shoe work was done at home. Mr Garner has lived long enough to see Olney develop and become a modern and up-to-date country town. The streets are well lighted and tidy, the shops clean and bright, and the conditions generally have vastly improved. In this development and progress Mr Garner has played his part nobly and well.

Mr Garner is naturally proud of the fact that his shop has an interesting literary association. In the Life of Cowper, the late Thomas Wright, the Olney historian, records that it was at 21, Market Place, just as she was about to enter, that the poet had the first glimpse of Lady Austen, who afterwards had so considerable an influence upon him, and at whose suggestion he composed his fine work, ‘The Task’. Cowper lived opposite at the house which is now the Cowper Museum. That was in 1781, and the shop was then a linen draper’s, in the occupation of a Mr. Palmer. It was at this same house many years after, that there resided the Misses Daniells, two sisters, engaged in business as dressmakers, one of whom, 43 years ago, was to become Mr Garner’s wife. 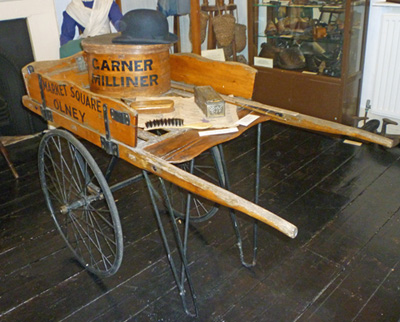 Garner’s Handcart, often seen outside the shop (Currently on display at the Cowper & Newton Museum)

The shop has another link with Cowper. This is a counter, still in use, on which the poet often sat when visiting the premises.

To summarise how in the course of 50 years a small business, under the able guidance of Mr Garner, has grown to an important concern, it need only be mentioned that in 1896 alterations were effected which allowed for the accommodation of the up-to-date gents’ clothing department. This change not only increased the business but materially improved the appearance of that side of the Market Place. In 1901 Mr Garner secured the adjoining premises, formerly occupied by Messrs Dimmock & Co., which are utilised as the linoleum, floorcloth and carpet department. But it was at the close of the Great War that the most extensive alterations were made. Then the old building was pulled down and rebuilt, and the installation of a fine plate glass front from end to end of the site marked another step up the ladder in the firm’s history. There are now four large windows, and the frontage measures 66 feet, enabling this progressive firm to make one of the largest and most attractive displays to be seen in Olney or any other North Bucks town. All this has been accomplished by sheer hard work and by a desire on the part of Mr Garner and his son to seize upon opportunities for development as they have presented themselves. And in the progress they have made they have accomplished not a little in improving the conditions under which the people of Olney and the district are able to shop. In visiting Garner’s the public know that not only will they be met with civility but with a desire on the part of the principals and their staff to give good service and to offer goods of reliable quality at the right price. It is in that spirit that they have launched the great sale now in progress and which so fittingly commemorates Mr J J Garner’s fifty years’ continuous association with business life of Olney. His motto through life has been – ‘Get a reputation among your customers, serve them well, and you are on the high road to success.’ He has lived up to that high ideal unflinchingly, and therein lies the secret of the great progress he has been able to make, and the proud place his business holds in the trading interests of Olney and a very wide area outside.

What rejoices Mr Garner more than anything else is the happy relations which exist between himself and his co-traders. ‘We are a very happy family,’ he says, ‘and we work together amicably and smoothly.’ That is a tribute which the business men of Olney will appreciate, coming as it does from a colleague who has been longer in business than any of them.

Yesterday (Friday) morning Mr Garner had a surprise presentation from the members of his staff, in the form of a silver card case, which was handed to him by Miss West. The case had the engraved inscription:- ‘Presented to Mr J J Garner by the staff. 1886 – 1936.’

To Mrs Garner the staff presented a beautiful bouquet of golden flowers. 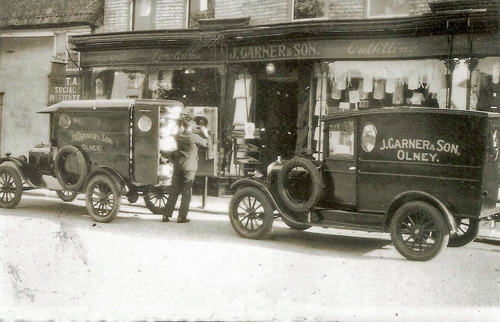 Visit the next page – Church Honours