“Many of the women with whom [Samuel] Richardson corresponded were relatively untutored and without intellectual pretensions or aspirations, and many were from clerical families. One untrained provincial reader was Jane Johnson (1706-59). She was a great letter-writer and, fortunately, her voluminous correspondence survived the fate of no doubt countless women readers of her background and time¹. During this period the postal service vastly expanded and letter-writing became central to the lives not just of the elite but of almost everyone who could write, even with limited proficiency. In fact letter-writing became a crucial way of honing literacy skills which were then passed on to the next generation through family networks of letter readers. 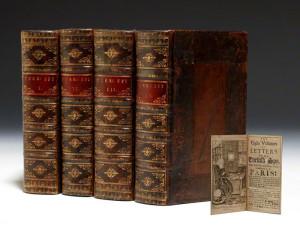 Letters Writ by a Turkish Spy

Jane Johnson’s father had been a ‘menial estate servant’ but he managed to buy land in Warwickshire which was later sold. Jane married Woolsey Johnson, a Cambridge graduate, in 1735. They lived in the small market town of Olney in the northern corner of Buckinghamshire, some fifty miles from London where Woolsey was a vicar. Jane was devout and an avid reader who sought to answer typical questions about how to live – and not to live – through her extensive reading. In the margin of her favourite thriller, the eight-volume Letters Writ by a Turkish Spy (fictional letters purporting to have been written by an Ottoman spy in Louis XIV’s court), she copied out the phrase ‘This Western World lies drown’d in Wickedness’ and then noted in the margin ‘This is the exact picture of Great Britain at this present time Anno Domi 1755. Pray God Grant my sons may escape the contagion, & live Virtuous in a nation flowing with … wicked practices. Amen.’²  The book is supposedly based on real letters and allows the reader to follow the adventures of its Muslim hero as he encounters the hypocrisy of Europe and its religions.

Jane was no scholar of the classical languages and so she tackled the great volumes of history and literature by reading translations and more popular works. Johnson left a record of the core of her reading: ‘The books that are to be Read by All that would be Eloquent, Polite, Genteel & agreeable; Wise in this world, & Happy in the next; are the Bible, Homer, Milton, the Guardians, Spectators and Tatlers. These should be Read over & over again, & short Extracts Learn’d by Heart … these are the only Books necessary to be read for improvement, all others only for Diversion. Whovever follows this rule will think justly, & write and talk eloquently.’ Jane was a great copier of facts and sayings that she harvested from all manner of books. She was typical in reading for moral and general instruction but she was also quite open about reading for entertainment. In her letters she quotes from her core library, but also from Juvenal’s satires  and Plutarch’s Lives, citing Aristotle, Plato, Demosthenes and Theophrastus. Like many of her contemporaries, including Samuel Richardson, she knew the classics through translations and modernisations. Among her lighthearted favourites are the Arabian Nights’ Entertainments and Aesop’s famous Fables.Her letters to women friends and those she received from them are dominated by accounts of the pleasures of current reading and excitement about what will be read next.

Her letters also include little poems, and those to her children include simple stories, usually with a moral end. We see her developing both more sophisticated literacy skills, and literary abilities.

Jane Johnson (1706-59) was the wife of Woolsey Johnson, Vicar of Olney, Buckinghamshire. She was the author of the earliest known (to date) example of an English fairy story for children. For further details see the Bodleian Library Record, vol. XVI, no. 2, Oct. 1997, pp. 165-70.

Robert Augustus Johnson (1745-99) was the son of Jane Johnson. He married Anna Rebecca Ludford Taylor, née Craven, sister of the 6th Lord Craven. He was at one time Rector of Wistanstow in Shropshire, in the patronage of the Earls of Craven, and was Rector of Hamstall Ridware, Staffordshire, 1791-9. At the time the journals were written he was living in Kenilworth, Warwickshire, close to the Craven seat at Combe Abbey where he seems to have been a frequent visitor.

Bought, with the help of the Friends of the Bodleian, from W. J. Blois Johnson, 1996.