THE ORIGINS OF THE ‘COAT OF ARMS’, ‘BADGE’ OR ‘CREST’ OF THE TOWN OF OLNEY

During the period 1500 to 1688 the Royal Herald’s completed a full survey of all of the coats of arms that they could find existing in towns, cities and families in England. The objective was to stop the illegal and unauthorized use of such arms and also impersonation by others. From that time any new coats of arms, or amendments to a registered arms, had to be approved by the College of Heralds and indeed still do.

It appears that there was no submission from the town of Olney and although arms were granted to a number of the noble families and their connections, living in either Weston Underwood or Warrington, Olney itself did not feature.

Oliver Ratcliff the proprietor of the Cowper Press in 13 High Street (South) was a passionate amateur historian who had moved into the town in 1880. In order to promote his hobby and his business he began publishing Almanacks and books on local history the last being ‘Olney, Bucks’ in 1907. The following year he closed the Press and moved with his family to Southend on Sea. 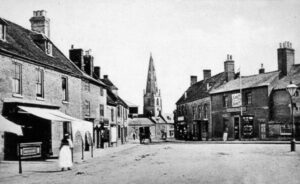 During his extensive research for this book Ratcliff discovered that the town actually had no registered arms and possibly seeing a business opportunity, he set about researching one which he later marketed in considerable quantities on postcards and on publications that he had printed.

He also determined that the two families who had a major influence on the town were both from Weston Underwood these were the ‘Olney’s’ themselves and the ‘Throckmorton’s’.

John Olney, a merchant is recorded in archived legal documents dated 1371 and is also known to have purchased land in Weston Underwood in 1381. He died in 1405 and is buried in the church at Weston Underwood.

The estate passed to his son John whose own will was proved in December 1422, and who in turn handed the property down to his son Robert.

It was this Robert’s daughter Margaret Olney who married Sir Thomas Throckmorton in 1446, and the couples heir, also Sir Robert (born 1451 or 1452), who died while on a pilgrimage to the Holy Land in 1518. He was succeeded by his son Sir George Throckmorton who on 20th July 1552 bequeathed the estate to son – yet another Robert, and his second wife Elizabeth, (the widow of the executed Lord Hungerford). Robert and Elizabeth had married in 1542.

Lady Elizabeth died in 1571 and was also buried in Weston Underwood church, and it was the discovery of the combined family coat of arms on her memorial that gave Ratcliff the necessary clues that he needed to be able to research and devise an accurate arms for the town.

The Throckmorton’s continued to live at Weston for over six centuries.

Other families who could have been considered because of their connections with the two above, usually by marriage, were Adderbury, Spiney, Bosun, Wylie, Hussey and Fortesque. 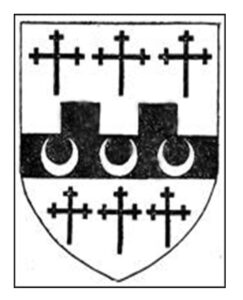 The correct Olney Arms
(according to Oliver Ratcliff)

Ratcliff describes the arms of the main branch of the ‘Olney’ family as illustrated in his book (but in black and white) in heraldic terms – as such:-

Argent on a fess embattled between six cross–crosslets fitchée sable, three crescents of the field argent.

A secondary branch as:-

These can be simplified as a silver (or as was permissible, white) shield with black bar prominently displayed across the middle. This bar known as a Fess is embellished with what appear to be the ramparts of a castle or castle walls known as embattlements. There are three crosslets in black in the top half of the shield and three more also in black in the bottom part. These resemble an amalgam of a cross and a sword.

Also on the Fess are three crescents in silver although in the secondary branch these are actually the three purple roundels.

So what does this all mean:-

The argent or shield itself is self explanatory, in that the family were entitled to bear arms.

The bar across the middle, the Fess, is meant to resemble a military or knights belt and signifies that the holder of the arms had a military background and must always be in readiness to act in the well being of the people.

The embattlements are intended to show that the family had been involved in a battle involving a fortification of some kind (possibly in the holy land).

The crosslets are meant to signify that the family were believers or followers of Christ – especially important during the crusades.

The crescents are similarly an acknowledgement that they had been involved in one or more crusades to Turkey and the Holy Land.

The purple roundels are intended to signify that a member of the family had received wounds in battle.

For the image used on his own postcards etc., Oliver Ratcliff adopted the main Olney family shield in silver (white) with the black and silver (white) images as shown above.

The subsequent appearance of derivatives

Oliver Ratcliff’s Olney Coat of Arms appears to have been the beginnings of the arms now recognised as being those of the town, but which have over the years been adopted with amendments by so many local groups, organisations and sports clubs. Amendments have included the addition of symbols to represent their own function and accompanied by changes in colours. Many of these would not satisfy the rules of heraldry, but because they are simply used as a badge or crest and are not formally registered, this is accepted.

These Ratcliff promoted arms were adopted for general use by Olney Parish and then Town Council until in 1977, in the year of the Silver Jubilee of H.M. The Queen, Olney Town Council encouraged local artists within the area to recreate and update the crest. A design submitted by C.R. (Reg) Perkins was selected and approved as the new town crest and incorporated into the medallion of the Mayor of Olney’s Chain of Office. Unsurprisingly this crest remains prominent on the Olney Town Council letter heading. 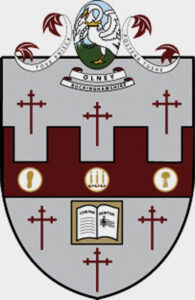 But what of the large tree that has also appeared in some badges? It is difficult to determine what this tree actually represents. It could be taken as being the ‘Churchyard Elm’ that until the 1950’s stood at the north end of the town, opposite the Queen Hotel and on the reputed site of the first Christian Church at Olney.

Equally though it may be the last of the three huge elm trees that were once on the Market Place, or even  the old oak tree near Weston Underwood that was a favourite of William Cowper and referred to as ‘Cowpers Oak’.

The ODHS is indebted to Trevor N. Stewart for his studies and presentation regarding this article on the  Badge or Crest of the town of Olney.