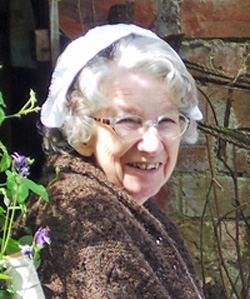 Elizabeth dressed in period costume at the Cowper & Newton Museum

When Mike Neale suggested I could have a page on the Olney & District Historical Society’s updated website, I immediately liked the idea, for although not strictly an Olneyite I am married to one! I have lived in the North Bucks area since I was five years old and have been researching the Local History of Olney since the early 1970s.

Let me tell you how this came about. I had a wonderful father-in-law, George Knight (1895-1984), with a prodigious memory for events in Olney over the years. He could remember the Relief of Mafeking and the death of Queen Victoria! 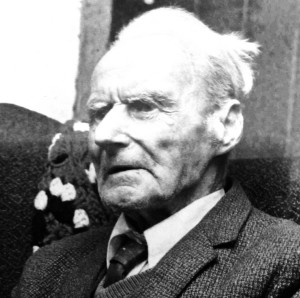 His tales awakened my interest and I began to want to go further back than personal memories, important though they are as a first step on any journey of discovery, be it for local or family history. Where could I go for written evidence from the printed word (secondary sources) through to original documentation (primary sources)?

Obviously, the first port of call was the shelf of local history books in the Reference Section of Olney Library. At that time these were mostly written around the turn of the twentieth century, and included:

I then went on to the nineteenth and early twentieth century County Histories, which all include chapters on Olney.

Then, unexpectedly, the door of enlightment was opened by a school master from Deanshanger, Jack Gould (1916-2009), when he began a course of evening classes in Olney, entitled ‘History on your Doorstep’. He gave his class members local projects to do, after giving them the national background to various topics, they then had to do the research themselves. One farmer’s wife undertook to do a map of all the fieldnames in the parish and this is still used today to name new roads on the housing estates, which have grown up around the town.

One week the tutor asked “Where was the Two Coopers pub?” “Oh, you mean the Two Brewers down the High Street”, the class replied. 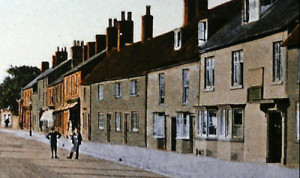 “No, I don’t” he said, “there was once a Two Coopers also, does anyone want to find out where?” I found my hand going up, as I thought I could ask father-in-law as he was bound to know! Besides identifying the former Two Coopers, he was also able to list many more former hostelries in the town. I was able to confirm the names of these former pubs from the Trade Directories in the Library. Armed with all this extra knowledge, I typed up the results and presented it to the class.

Soon afterwards I read in a local history publication of the series of Victualler’s Registers, housed in the County Archives in Aylesbury. So I set off on a long cross country bus journey via Bedford and Woburn Sands to the county town. (This was long before the coming of Milton Keynes and its regular bus service to Aylesbury.) This was to be the first of several visits to the bowels of the County Offices. At this time I was pregnant with our third child and used to come back with swollen ankles, but it was all worth it for by now I was truly bitten with the historical research bug, which eventually led, five years further on, to the publication of ‘The Old Inns of Olney’ in 1981.

A month after the birth of our third son, I disgusted my mother-in-law by asking her to babysit, while my husband and I went to Bradwell Abbey for a series of evening classes learning to read medieval handwriting, travelling in winter conditions on an old motorbike with acetylene lamps lighting the way! 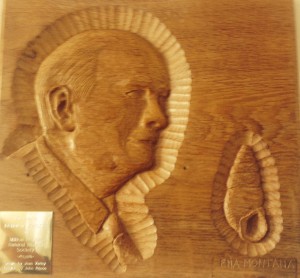 My husband continued to humour me by ‘holding the fort’ while I went on weekend and sometimes week long extra mural University courses. I would come home on a ‘high’, full of everything new I had learned from Local Architecture and Field Archaeology to Medieval Latin but had to come down to earth with a bump as our three sons rushed at me as soon as I opened the front door with, “Mum, this…” and “Mum, that …”!

Further research led to the publication, with co-author, Gordon Osborn (1913-1991) of two photographic books of local, old picture postcards. To mark the Millennium, I published a walk-about booklet on ‘William Cowper’s Olney’ with quotations from the delightful letters of the poet.

Throughout all these research years I have been very grateful to my husband for his encouragement and patience, and to my sons, who have had to live all their lives with an enthusiastic amateur historian for a mother!

But back to the present, if that is not a contradiction in terms! When Mike Neale was reading through other local history societies’ web sites, he realised that most had something on the schools in their parish. Olney’s didn’t, so he approached me for information, as he knew I had given a talk some years ago on ‘Education in Olney’, when I was working part-time in the Olney Library. That enquiry has given me a reason for starting this regular page on specific local history topics. 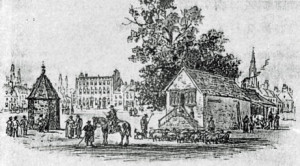 I must admit I like writing up local history in chronological order, but obviously Olney had several schools whose dates overlap, so I have begun the series by writing about each individual school.

The first instalment talks about Samuel Teedon’s School on the Market Place in the eighteenth century.