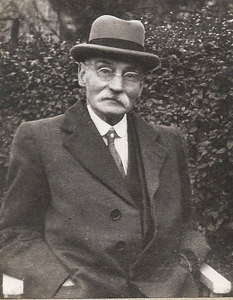 As reported in the Bucks Standard dated Saturday, October 7th 1944.

A LOSS TO NORTH BUCKS CONGREGATIONALISM

With profound regret, which will be shared by his host of friends in North Bucks, we announce the death of Mr Joseph J Garner, which took place in the early hours of Monday morning last at his residence in the Market Place, Olney, at the age of 77. Mrs Garner survives her husband, and there is a family of one son and two daughters, to whom the sympathy of all classes of residents in Olney is expressed in their loss. Deceased had carried on business in Olney for well over half-a-century, first as a draper, with which he later combined that of an outfitter, subsequently adding a furnishing department. In August 1936 he celebrated his jubilee as a public trader, and four years later he was overtaken with an illness which had ever since rendered him incapable of taking any part in the business, which he left to the management of his only son, who he had previously taken into partnership.

Mr Garner was proud of the fact that he was a Bucks man. Born at Newport Pagnell, he was educated at the British School in that town. In 1877 he won one of the first scholarships which entitled him to free education for three years. But part of this he forfeited by his determination to enter upon a business carer at the early age of 12. His first place was at the printing establishment of Mr Joseph Simpson in High-street and he was still working there when the premises and adjoining properties were destroyed by the great fire in Newport Pagnell. In 1880 he moved to Buckingham, and was for six years with Messrs Allen & Vyle, drapers, and the knowledge he acquired there stood him in good stead when, on August 28, 1886, he moved to the premises in Market Place, Olney, to be himself a business man on his own account, and where ever since, and up to his affliction during the past four years, he took a prominent part in trading affairs, and derived much happiness in assisting in many ways in the advancement of the town of his adoption. He often recalled that when he first went to Olney there was no Midland Road, no large factory at the corner, the streets were only paved in patches – cobble stones predominated – there were no sanitary arrangements, no water works, no electric light. Those were days when people had to mount stiles and cross fields to get to the railway station, and much of the shoe work was done by cobblers in their own homes. Mr Garner lived long enough to see the Olney he loved develop and become a modern and up-to-date country town, with streets well cared for and tidy, the shops clean and bright, and the amenities of the old town vastly improved. In that development and progress Mr Garner played no unimportant part. The relationship between Mr Garner and his fellow traders was always a very happy one, and when in conversation with the writer prior to his long illness he remarked, “We are a very happy family, and we work together amicably and smoothly”, a tribute which we know the business men of Olney will appreciate, coming as it did from a colleague who had been longer in business that any of them. On the occasion of his jubilee celebration as a trader the members of his staff presented him with a silver card case, and their gift to Mrs Garner was a bouquet of golden flowers.

On May 31, 1893, Mr Garner married Miss Daniells, who, with a sister, carried on a dressmaking business in Olney. The marriage was at Anerley Congregational church. Because of Mr Garner’s illness the golden wedding was celebrated very quietly in May last year. 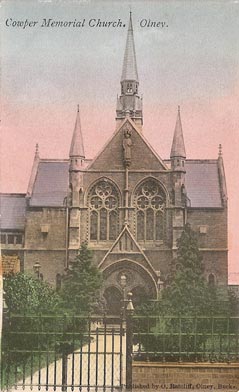 The marriage service was conducted by the Rev G G Horton, the then pastor of the Cowper Memorial Congregational Church at Olney, where Mr Garner had previously, and during the many years he had been in the town, been a regular worshipper up to the time of his illness. The deceased was a devout Christian, and a loyal Free Churchman. He was one of the pillars of the Congregational Church, which he had served in every capacity as a layman. He was a teacher in the Sunday school, superintendent of the Sunday school, a member of the Diaconate, had frequently presided at the organ for the Sunday services, whilst h had on several occasions, when the pastorate was vacant, conducted the services of public worship. One of the greatest joys of his life was the prominent part he was privileged to take in the building, many years ago, of the church which stands as the Congregational memorial to the poet Cowper, whose hymns and poems he frequently quoted, and whose contributions to English religious literature were a source of comfort to him. He was one of the earliest members of the North Bucks Congregational Union, to which he gave splendid service as a member of the Executive. His interest in the various churches of the Union was recognised in 1911, when he was honoured by election to the chairmanship of the Union. The English Sunday School Union marked his 50 years’ work in teaching the children the gospel truths by presenting him, about the same time, with a certificate for long and faithful service. His greatest work for his own church at Olney was in connection with his long years of service as secretary, and on the occasion of his retirement from active work in that capacity the church and congregation made him a handsome gift. As a local preacher Mr Garner’s visits to the village churches were always looked forward to with the greatest interest. The little chapel at Ravenstone had no better friend, and for more than half-a-century he every year conducted the harvest thanksgiving services there.

Whilst making the Congregational Church his chief concern in life, he had given valued service to Olney in many direction, public and otherwise. A great admirer of the poet Cowper it was no wonder that his love for the Cowper Museum was so deep and enduring. He was curator and trustee and lost no opportunity for rendering service to help forward its prosperity. He was fond of taking parties from the various associations with which he was connected; in fact, all his visitors were led to the Cowper Museum.

Mr Garner’s whole life was given to Christian usefulness and to service to his neighbours. He has passed to the “higher service” at a ripe age, but he will long be remembered by his fellow townsmen and by the religious and other organisations for which he did so much.

The funeral service was on Wednesday afternoon, and was held in the Congregational Church which Mr Garner loved. The representative assembly, which included men and women in all walks of life, bore striking testimony to the very high esteem in which deceased was held. The service was conducted by the Rev W E Cheesley, pastor of the Cowper Memorial Church, assisted by the Rev J C Martin, Brackley (secretary of the North Bucks Congregational Union), and by Mr J Hanson, an old friend of the family, who read three of Mr Garner’s favourite portions of Scripture. Mr J C Dicks was at the organ, and as opening voluntaries he played Spohr’s “Blest are the departed”, also “Cast thy burden”, and, as the cortege entered the church, “I know that my Redeemer liveth”. Three of Cowper’s well known hymns were sung – “Begone, unbelief”, “How sweet the Name of Jesus sounds” and “O for a closer walk with God”.

In a short address, the Rev W E Cheesley said as a church they mourned the loss of one of their most faithful and esteemed members and deacons. Mr Garner, he said, had for 60 years played a very important part in that church and all its branches. The town also had lost one of its prominent men, and the village churches, where deceased had laboured faithfully for so many hyears had missed him during his illness and they would always respect his memory.

The Rev J C Martin also paid a very high tribute to the work of Mr Garner for the North Bucks Congregational Union.

At the close of the service the organist played “O rest in the Lord.”

Visit the next page – The Later Years