Compiled by Thomas Wright in 1909 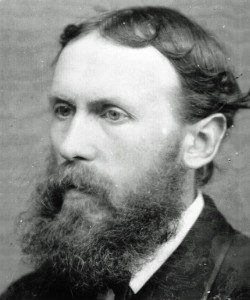 OLNEY means Ola’s Island – Ola being the name of some Saxon proprietor – and the first authentic mention of the town is in a charter of 979. The passage runs: “These are the boundaries of the ten hydes of land at Ollanege. First from Calew’s (Calewan) weir along the stream (lace) to the Holy Brook, along the brook to the Holy Well, from the well to the valley field (æcere), from the valley field to the three boundaries, from the three boundaries to Ecga’s croft, from Ecga’s croft to the ditch, along the ditch to the field, then along the roots of the wood to Hild’s low (burial mound), from Hild’s low to the stone (boundary stone, commonly called ‘Hoarstone’), from the stone to the brook, along the brook into Use, along Use, to Wilinford, from the ford along Use to Cæcca’s weir, from Cæcca’s weir along Use to Calew’s weir,” The Terminals “eg,” “ege” represent an original Anglo-Saxon “ig” (pronounced “e”) which ultimately becomes “ey,” meaning an island, or land mostly surrounded by water. The “n” in Olney is the Anglo-Saxon genitive ending of Ola.¹ The modern name Calworth, belonging to several fields near the ouse, probably has its foundation in the old personal name Calew, and the boundaries of the parish are approximately the same today as they were in the time of the Anglo-Saxon Charter.
(¹) I am indebted for these notes to Mr . W. H. Duignan, Gorway, Walsall.

In Domesday Book the town is called Olnei. The ancient parish Church stood at the north end of the town, its site being indicated by a venerable hollow tree – “the Churchyard Elm,” The present edifice, with its well known spire, was erected between 1325 and 1350, and dedicated to SS. Peter and Paul.

The benefice had been a Rectory till 1504 and the names of nineteen Rectors have been preserved, the last being Henry Ainsworth. Passing over William Wareyn, the first Vicar, and his ten immediate successors we come to Nathaniel Jury the first signatory of the Olney Register. It was subsequently signed by:

The Vicars from Jury to Johnson have left nothing but their names, but Moses Browne is remembered as one of the most distinguished of the early Evangelicals. Born in 1703, he was close on fifty before he obtained ordination. He figures in “The Life and Times of the Countess of Huntingdon,” and some of his sayings are preserved in the works of the Rev. Augustus Toplady. In 1764 he was appointed chaplain of Morden College, Kent, and Rector of Sutton, Lincolnshire, and thenceforth he resided at Blackheath. The duty at Olney was taken by John Newton who filled the position of curate for sixteen years. Of John Newton’s remarkable career, of his friendship with the poet Cowper, of his prose masterpiece “Letters to a Wife,” of “Olney Hymns,” written in collaboration with Cowper, one need no more than refer. When Newton left Olney for St. Mary Woolnoth, London, in 1780, his place was taken by the rancorous Benjamin Page, the curate who “treated poor Tom Raban, as if he were a Jew.” (Cowper to Newton, 31 Aug. 1780). Olney however soon became too hot for Mr. Page, and he was the same year succeeded by the Rev. Thomas Scott of “The Force of Truth” and “Commentary” fame. In 1785, Scott was appointed rector of Aston Sandford, Bucks, and it was during the curacy of his successor, Richard Postlethwaite, that Lady Hesketh became, as Cowper facetiously put it, “Vicar of Olney,” that is to say she occupied rooms in the Vicarage.

On the death of Moses Browne, Olney, after being served for twenty four years by curates, had once more a resident Vicar, the Rev. James Bean, who was followed successively by Melville Horne, Christopher Stephenson, and Henry Gauntlett, the distinguished Evangelical father of a distinguished Musical son, Dr. Henry John Gauntlett. Mr. Gauntlett was curate under Mr. Stephenson from 1811 to 1815 when he became Vicar. ¹
(¹) Some account of the Vicarage House will be found on p. 487, of this work.

The first entry in the Olney Register is that of the baptism of William Johnson, son of Thomas Johnson who resided at the Great House, a Mansion near the church. The Lord of the Manor at that time was a Turkey merchant named Richard Nicholl, but the advowson of the Vicarage had been for twenty three years in the possession of the Johnson, family. The Wolsey Johnson, Vicar of Olney from 1735 to 1753 was the son ² of the William Johnson the entry of whose baptism opens the register. William Johnson died 19 Oct. 1736 (p. 270). “Esq’ ” is always appended to his name, and, consonant with custom, his daughters even when babies were honoured with the title of Mrs. Thus on 8 April 1709 was baptised “Mrs. Anne Johnson daughter of William Esq’.” (p. 163).
(²) For entry of his baptism, see page 112

Among the generous actions of the poet Cowper was the rearing of a poor boy, Richard Coleman, the son of drunken parents. “Dick Coleman,” as he was generally styled, married a widow (Martha Willson) with one child – the Hannah Willson who became Cowper’s protégée. Cowper’s first reference to Hannah is on 22 July 1781, when he is describing a jaunt to the Spinnie. Hannah, he says, “thoroughly enjoyed it,” and he adds, “She is as much delighted today with the acquisition of a sister born last night.” The entry of the new-comer’s baptism will be found on p. 398. It runs “Maria of Richard and Martha Coleman 13 Aug.” (1781).

All students of Cowper are familiar with the name of Samuel Teedon, and have read or heard of Teedon’s Diary. Teedon, who was trained for the Church, came to Olney about 1775, and we find him earning a pittance by teaching in the Shiel Hall, an old building on the Market Place. His household consisted of his cousin, Elizabeth Killingworth (Mammy,) Eusebius Killingworth [the “Worthy” of Teedon’s Diary and the “Mr. Killingworth” of Cowper’s Letters] and Polly Taylor, who may have been Teedon’s natural daughter. The entry of the burial of Teedon (9 June 1798) will be found on page 444; that of the burial of “Mammy” (5 Dec. 1807) on page 470; that of the marriage of Worthy and Polly (18 April 1808) on page 472.

Among the prominent figures in Cowper’s letters are Geary Ball, the dram-drinker, “wrong-headed Nathan Sample” and the carpenter-parson Thomas Raban. From page 322 we learn that Geary Ball was born 4 July 1754 and baptised 17 July of the same year, from page 390 that on 20 Oct. 1779 he married Sarah Raban, and from page 394 that in 1781 he lost her. He subsequently married a daughter of Mr. Perry of Lavendon Mill. To Geary’s deplorable habits Cowper refers in a letter of 19 May 1785 (See my Life of Cowper p. 381). “He is now,” says Cowper, “languishing in a dropsy, and in the prime of life [he was 31] labouring under all the infirmities of old age.” A few days after the despatch of this letter Geary died, and the entry of his burial will be found on page 412. The marriage of Nathan Sample is recorded on page 343, and his burial on page 412. Mr. Ashburner the herculean draper, who marched before Geary’s coffin, and who himself died a few days after, probably lies in the Baptist Meeting Yard. In any circumstances there is no record in this register of his burial.

Cowper refers again and again to Thomas Raban and his afflicted daughter Jenny whose baptism is recorded on page 353 (8 July 1768). Thomas was buried 4 July 1802 (p. 457), and his funeral sermon was preached on Olney Market Place by the Rev. William Bull of Newport Pagnell (See Bull’s Memorials of the Rev. Wm. Bull page 283 and Colman’s History of the Northampton Churches page 295.)

Cowper’s lines on the postboy have been quoted times innumerable:

He comes, the herald of a noisy world,
With spattered boots, strapped waist, and frozen locks,
News from all nations lumbering at his back.

The actual postboy referred to in these lines is said to have been the Richard Tyrril christened 24 May 1765 (p. 347). At any rate he was “on the road” in Cowper’s time and as late as 1832, when he was interviewed by a writer in Hone’s Year Book.

One of the very best of Cowper’s letters is that describing the whipping of “the junior son of Molly Boswell” [See my Life of Cowper, p. 334]. Who has not read how the culprit, tied to the cart tail, was whipped by the beadle; how the beadle was whipped by the constable, and the constable by the “lass of Silver End!” Ample materials for a biography of Molly and her hopeful brood are to be found in this Register. Thus, to mention two items, John “the senior son” of Richard and Mary Boswell was christened 1 Jan. 1757 (p. 325); James “the junior son” on 1 April 1767 (p. 351). So in 1783, the date of the whipping, James would be about 16, and Cowper speaks of him as “a boy”. From Cowper’s phraseology one would judge that Molly was a widow; and one is tempted to assume that the Richard Boswell who was buried 12 May 1781 (p. 394), was her husband, unless it was the Richard Boswell who was buried 9 Aug. 1777 (p. 381). Would that the entries were more definite!

On page 475 appears the record (22 Aug. 1809) of the marriage of the Rev. Samuel Greatheed, “dissenting minister,” assistant of the Rev. William Bull and friend of Cowper, and on pages 484, 485 are references to William Wilson, Cowper’s Wigmaker, and James Andrews Cowper’s “Michael Angelo.” The accounts of the Olney Workhouse, (p. 504) and of the Great Fire of 1854 (p. 504) are worthy of special notice.

Many of the names that occur in the early entries of the Register are still common in the parish. For example we still have Cliftons, Freemans, Griggses, Hindes, Boswells, Osborns, Soles, Kitcheners, Andrewses, Cattells, Cowleys, and Morgans; but we have no Assabys, Dumvilles, Nuces, Tatmans, Kalys, Gwillets, Ashburners, Carolls, Ablitts, Sandills, Vrins or Chandflowers. Alas! no one in Olney now is either Jolly or Rich. For years we have not seen a Pye, a Cushion, a Pheasant, a Fox, a Peacock, a Wren, or a Squirrel. We have Roses but no Thorns.

The Coopers are still represented. Doubtless they are from the same stock as was the John Cooper who, with his wife and four children, emigrated from Olney to New England in 1635, and who became a person of importance in his adopted country. A descendant of his, Mr. J.C. Cooper, writing in May 1909 to Mr. Oliver Ratcliff, observes, “Of course you realize that all the emigrants to Plymouth were people of strong religious convictions not necessarily opposed to the church of England, but bitterly opposed to Roman Catholicism.”

Some curious particulars of Eighteenth Century Olney folk will be found in a little book by Mr. William Bradbrook, M.R.C.S.., Quarter Sessions, etc. For example Mr. Bradbrook quotes from the Records of Quarter Sessions an order, dated 6 September, 1729, “to the constables and keeper of the House of Correction at Olney to arrest Susanna, wife of Theodore Wakeman, mason; Mary Abraham, spinster; Eliza Osborne, spinster; Edward Boswell, laborer; Mary, wife of John Partridge, laborer; who, with divers other persons unknown, did, in the market place of Olney, in a riotous manner on Monday last, assault and beat Thos. Old, of Lavendon, yeoman, and Thos. Hull, of Harrold, Beds., yeoman, and take away by force a bushel of wheat belonging to Old, and two bushels of wheat belonging to Hull, etc., etc.”

Another entry from the Records of Quarter Sessions is of an even more lurid kind, “1776. July 8. Inquest at Olney on Ann Chandler, killed by Wm. Brice.”

To the parish of Olney has time out of mind been attached the hamlet of Warrington; consequently a number of entries concerning Warrington persons will be found in these pages – one family in particular – the Throckmortons – figuring conspicuously.