It may come as a surprise to many Olney people, even the older residents, that a series of extremely well organised and well supported Amateur Athletic Sports meetings was held in Olney in the 1870’s. 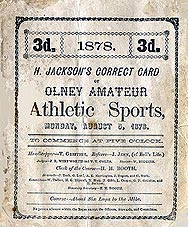 A 12-page programme for one of these sports meetings came to light in 1979 when Mrs Beccy Rawlings was helping to clear out her late father’s office. Beccy’s father was Mr Roger Perkins, a well-known local undertaker. His office, today an optician’s, was situated near the cattle market, now a car park adjacent to the Market Square. The programme referred to an Athletic Sports Meeting to be held on Monday 6th August 1878.

‘H. Jackson’s Correct Card of Olney Amateur Athletic Sports’, to give the programme its full title, is interesting, not least because it appears that there were few, if any, adult competitors from Olney, although some residents may have participated in the tug-of-war, or could have been the owners of the donkeys! Most competitors would have travelled some distance to attend, even some from as far away as Pershore and Wolverhampton. Twenty-two events were listed in the programme, including the four heats in the 220 yards Handicap Flat Race, the prize for winning this race being a silver cup valued at 6 guineas. The premier event of the day was the Olney Cup Race, a one mile handicap flat race. The prize for winning this race was a silver cup valued at 12 guineas. An entrance fee of 2/6d was required for most events which seems relatively expensive for 1878.

The programme also announces a concert to take place on the Market Hill after the Athletic Sports meeting. On the back cover of the programme are train departure times for Northampton, and Bedford through to London St Pancras. Two special trains are listed, one for London with a journey time of 110 minutes, the other for Northampton with a journey time of 21 minutes. One hundred and twenty-eight years later those journey times would take some beating!

The discovery of the programme prompted more than a few local enquiries within the town as to how such a major Athletic Sports meeting developed and had then vanished without trace, but these local enquiries produced little information of any significance. However, another line of enquiry led to the local press for the year 1878. To the delight of the researchers a full report of this Athletic Sports meeting was found in ‘Croydon’s Weekly Standard’, the fore-runner to ‘The Bucks Standard’. These local newspapers are held on microfilm at the Milton Keynes Library in Silbury Boulevard.

Reading the newspaper report it became apparent that the Athletic Sports meeting formed only one part of a full day’s holiday event which began with a major flower show. Even more surprising, it was reported that around 8,000 people attended this particular holiday event. This number is even more staggering when the population of Olney, according to the 1891 Census, was only 2,399. The attendance was obviously helped by the Northampton – Olney – Bedford railway that opened on 10th June 1872.

The more one reads the lengthy newspaper article, the more intriguing this Athletic Sport event becomes, and consequently the ‘Croydon’s Weekly Standard’ newspaper was reviewed over the period 1870 to 1880 for evidence of its development and popularity. In short, newspaper reports indicate that the Amateur Athletic Sports meeting was the focus of Olney’s summer holiday celebrations for a decade.

The ODHS is indebted to Beccy Rawlings for allowing us to reproduce the 1878 Olney Athletic Sports Programme. In addition, the Society acknowledges ‘Croydon’s Weekly Standard’ for the extracts from reports we have included in the book ‘Olney Continues…’.