The ODHS is indebted to Clive Whittall for providing us with a copy of an illustrated booklet entitled ‘The Olney Pageant Edition of John Gilpin’. The booklet was prepared in connection with the 1925 Historical Pageant which took place in Olney between the 1st and 4th July 1925. The purpose of the Pageant was to celebrate the occasion of the ‘Six-Hundredth Anniversary of the Foundation of the Church of SS Peter and Paul, Olney’.

In short, the ‘Diverting History of John Gilpin’ is a comic ballad by William Cowper written in 1782. The ballad concerns a draper, John Gilpin, who rides a runaway horse and who, eventually, arrives home safely. Cowper heard the story from Lady Anna Austen at a time of severe depression; it cheered him up to the extent that he put it into verse. 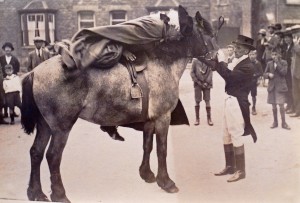 The booklet was sponsored by Mr Harry H Armstrong- a showman and character – one of the great lace dealers whose business was centred in and around Olney.  Harry himself re-enacted the character of John Gilpin in the pageant on Friday 3rd July. In the re-enactment the Bull Hotel on the Market Place becomes the Bell at Edmonton and The Knoll at the north end of the town becomes the road outside John Gilpin’s drapery shop. (For more information on Harry Armstrong and more images of his personal re-enactment of John Gilpin please click this link.)

The booklet includes an introduction by Mr Thomas Wright, author of ‘The Life and Cowper’ and locally well known School Head Master. Further information on Thomas Wright, and of course William Cowper and John Newton, is to be found in the Cowper & Newton Museum, Market Place Olney.

If you haven’t come across the tale of John Gilpin, then the illustrated format of the booklet is an entertaining way to become acquainted with the story. The reader may be excused from initially skipping the introduction and perhaps returning to it later!

To read the booklet on ‘Calameo’:

Click the enlarge icon in the centre of the booklet.
Next click the READ THE PUBLICATION box to the right of the booklet.
Apologies for the advertisement but it can be readily deleted.
It is recommended that the reader adopts the full screen ‘publication’ option (see icon in the top right hand corner).