Nov 26, 1915 Leave Euston at midnight. Arrive in Liverpool early morning feeling tired and rather strange not knowing our way about. Find somewhere to live. (Stokes Hotel) 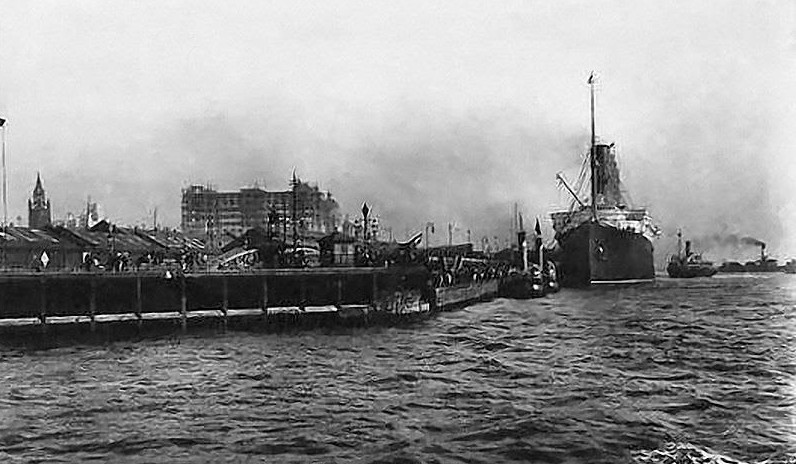 Liverpool docks c. 1910 – The ill fated Lusitania at the Landing Stage – torpedoed and sunk by a German U-boat on 7 May 1915 with the loss of  1198 lives
(Click photo for full screen image.)

Dec 1, 1915 Wednesday Go aboard the HMT Umona. We are then pulled out into mid-stream and anchor there. No one is allowed ashore. Feel rotten, everywhere very cramped, bad food and unable to wash.

Editor’s Note: HMT Umona was a British cargo and passenger liner. She was built at Sunderland on the River Wear in 1910, survived the First World War and was sunk by enemy action off Sierra Leone, West Africa in 1941. Umona spent her entire 31-year career with Bullard, King and Company. She was the second of the company’s ships of that name. The first was a 2,031 GRT cargo liner that had been built at Sunderland in 1890 and wrecked off the Maldives in the Indian Ocean in 1903. – No images found of HMT Umona.

Dec 2, 1915 At midnight, sail down the Mersey bound for Archangel.

Dec 3, 1915 See the Isle of Man and east coast of Ireland. Later pass the Giants Causeway. Sleep in hammocks the hooks for which were 15’’ apart and the mess tables underneath. Very crowded.

Dec 4, 1915 Pass the Maidens and make NW into the Atlantic Ocean owing to minefields. Leather clothes put on. Getting colder. The sea fairly rough and fellows begin to feel sea-sick. Held up by an Armed Liner for inspection.

Dec 5, 1915 Sunday Sea gets very rough. All food is fetched from the Galley at aft of ship. Had a wash for the first time since being on board. Well in the Northern Atlantic, getting very cold. Nothing in sight. Terrible cyclone commences. The waves go right over the boat and the propeller is continually coming out of the water.

Dec 6, 1915 Gale continues. Served out with life belts. Blown 150 miles out of our course. Cannot walk on deck without holding on to the handrails. Blown off my feet.

Dec 8, 1915 Two life boats blown away by the gale. Half of the cook-house blown overboard during the night. Things getting serious. Too bad to go for meals, stop in bed until 1 PM. Nearly everybody sick. No ventilation in holds. Fellows lying about wherever you go. Crew say that it is the worst storm they have experienced. Sick Bay full up, 95% of the men are bad. Waves come in at the hatchway and put 18 inches of water in our hold where we are sleeping. Fellows clothes and our mess utensils floating about.

Dec 10, 1915 Sea a little better. Fellows still lying about on deck too bad to take food and unable to go into Sick Bay, that being full up. I have a job to keep from being bad myself seeing so much sickness about. Pass the Faroe Islands. Boat shakes with the waves beating against it. Hear that our lifeboats were found on the coast of Scotland. 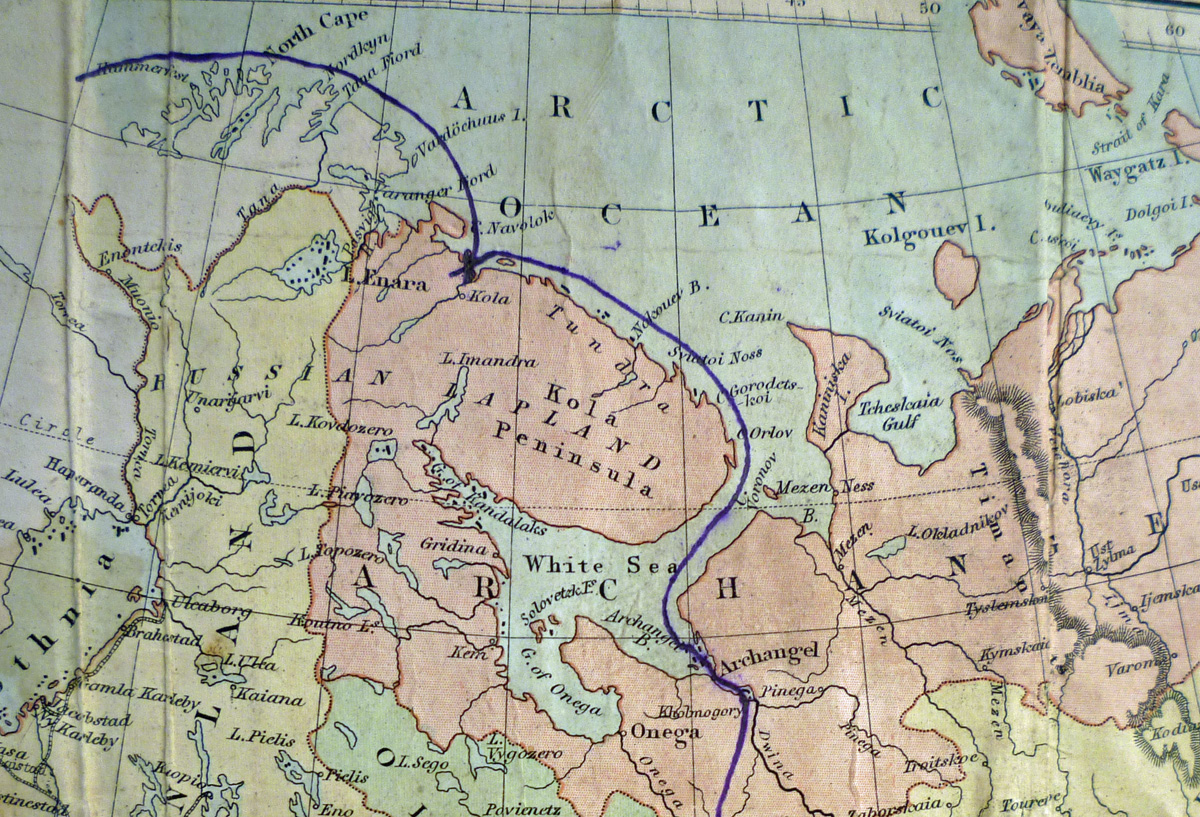 Dec 14, 1915 Tuesday Boat covered in snow. Lemonade frozen. Cannot keep warm. Pass some islands covered in snow. Side of the boat covered with ice. Still unable to wash. Cannot get enough to eat. See the Northern Lights, grand sight, sky all vivid colours. Have to put our watches on half an hour every day. Sun does not rise.

Dec 15, 1915 Arrive near Alexandrovsk (Lapland) and wait for ice breakers. Terribly cold. Ice all round the holds.
Editors Note: Alexandrovsk is not marked on the above map.

Dec 16, 1915 Anchored in Kola bay. (See map) High snow covered rocks all round. Practically no daylight. Lovely sight at night, beams of coloured lights moving about all over the sky. Have to melt snow for tea as all the pumps are frozen. Cannot keep warm and not enough to eat.

Dec 19, 1915 Sunday Still in the bay, unable to get to Archangel owing to ice. Salmon, bully and pickles frozen 8 degrees (F) below zero. Blocks of ice floating all around and knocking against the side of the boat. No water to drink.

Dec 20, 1915 Picking ice off the decks six inches thick. Moon shining on the water all the day as there is no sun.

Dec 22, 1915 Birds floating about on the ice. Feel very thankful for our rum issue.

Dec 25, 1915 Christmas. Feel as though I have got every complaint except housemaid’s knee. Go to Sick Bay and am given three small pills.

Dec 26, 1915 Boxing Day. Go to the Doctor again and have my temperature taken which is 102.4 degrees F and am told to get into the hospital. Write a letter and a few postcards and then go to bed.

Dec 28, 1915 I am told to clear out of hospital to make room for another fellow who had an accident, so get up and have to go down the hold again where there was 38 degrees of frost. Receive a letter which was sent to Liverpool.

Dec 31, 1915 Concert on deck. Double issue of rum. Have a wash and shave, the second since being on board.

Jan 1, 1916 A party of fellows go aboard a trawler, with all their kit, which takes them ashore at Alexandrovsk.

Jan 8, 1916 Go to another bay to take in water. Another party go ashore by a trawler.

Jan 9, 1916 Return to Alexandrovsk. About thirty other boats in port.

Jan 11, 1916 All the fellows on our mess go ashore except Billy and I who are left behind with a small party.

Jan 13, 1916 Feel rather lonely with all our mates ashore. Work all day for the ships cook so that we can get something to eat. 11 degrees below zero.

Jan 19, 1916 See the reindeers and dogs pulling sleighs over the snow. The sun comes out for a short time.

Jan 24, 1916 Black bread and reindeer for dinner. Big fight with black bread which was like putty and we made balls of it. Go for some drill on the lake in deep snow.

Jan 26, 1916 Go aboard the ‘Belgravian’, which had been crushed in the ice, to pump water from the holds.

Feb 12, 1916 Have a bath which was most necessary, whilst fellows are throwing snow balls.

Feb 14, 1916 Sun shining. Go for a walk and almost blinded by the brightness of the snow.

Feb 15, 1916 Feel rotten. Nearly everybody got visitors on their shirts.

May 10, 1916 Right arm getting better after four weeks sickness through vaccination.

May 16, 1916 Only bully and salt pork left in the way of meat. Snowing all day Big blizzard.

May 17, 1916 No darkness. Perfect daylight all the time. Loading up the ‘Graf Sculwarft’ ready for leaving Alexandrovsk.

May 21, 1916 Working hard, snowing and freezing hard. Go aboard the trawler ‘Sir James Rickett’ which takes us out to the ‘SS Czar’ an American – Russian liner. Leave Alexandrovsk cheering. Have a good wash and go to our cabin on the ‘Czar’. 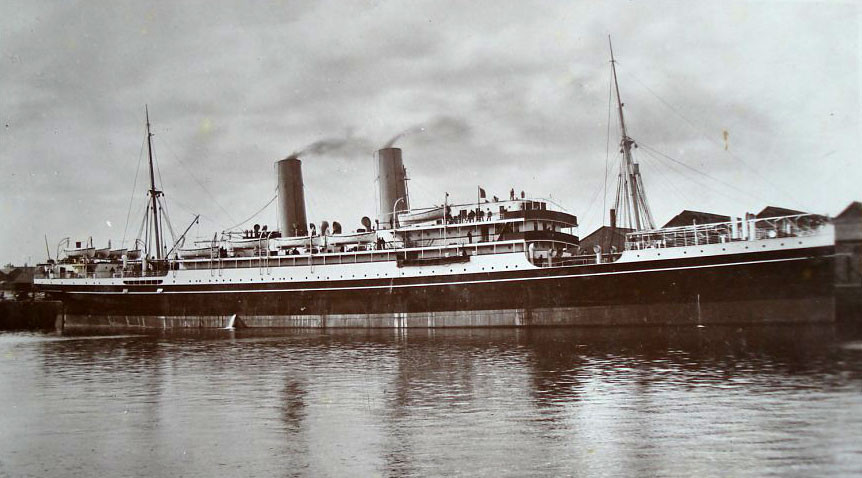 Editor’s Note:
SS Czar was launched on 23 March 1912 by Barclay Curle & Company of Glasgow, Scotland, for the Russian American Line, a subsidiary of the Danish East Asiatic Company. Czar had a 6,503 gross tonnage (GT) and measured 425 feet (130 m) long by 53.2 feet (16.2 m) abeam and had two funnels and two masts. She was driven by twin screw propellers at 15 knots (28 km/h) by two steam engines. Czar had accommodations for 30 passengers in first class, 260 in second class, and 1,086 in third class and steerage.
After the outbreak of World War I in August 1914, Czar switched to service from Archangel to New York, but ran only sporadically through 1916. After the Russian Revolution, the East Asiatic Company suspended service on the Russian American Line, and transferred several ships, including Czar, to British registry. The British shipping controller initially placed the liner under the management of John Ellerman’s Wilson Line, but Czar was transferred to the Cunard Line management by the end of 1917.

May 24, 1916 Enter the ice fields in the morning. See the seals lying on the high blocks of ice.

May 26, 1916 Our boat the ‘Czar’ is stuck in the ice and the ‘Dvinsk’ is about 300 yds away, neither boats can move. Fellows off our boat get down on the ice and walk over to the ‘Dvinsk’ to get a mail which is aboard her. I receive one parcel and eight letters.

May 27, 1916 ‘Dvinsk’ gets away and later the crew from our boat go down on the ice and anchor the bows to a huge block of ice some distance away, which enables us to swing round and get away also.

May 28, 1916 Full speed ahead, I am told to act as one of the firemen in case of accident. Leave the ice fields. Arrive at the Gulf of Archangel where there are 36 other boats waiting to go up the river.

May 29, 1916 Going up the river. Pass Archangel on our left and put in at quayside a little further up on the right, at Bakarista, where the railway station is. Russians start unloading. We go ashore for a little drill.

May 30, 1916 Go to Archangel on a paddle boat where there is a big reception waiting for us. Flags out, streets crowded with people who cheer us as we march through the town to the Park where a good tea is provided. The Mayor presents us with a Madonna and people give us ciggs and chocolates.

Editor’s Note:
It is acknowledged that the conditions that Tom experienced during this period in the Arctic Ocean were the most severe witnessed for over 40 years.

Click here for the second instalment: 2 ARCHANGEL TO THE TURKISH FRONT 1 June – 17 Oct 1916