Researching the school has proved to be more difficult than I thought, because, initially, I could not discover the actual address of the school. Nor could I find anything about its day to day management, the fees charged or the number of pupils, other than from the brief extracts in the diary of Samuel Teedon. You will recall from the previous instalment on Education in Olney, that he taught her pupils ‘Writing’ from 1792 until his death in 1798.

I did not know anything about Mrs Sample, so decided to search the Parish Registers for ‘Sample Marriages’ and found Nathan Sample married Rebecca Bernard on 15th September 1763 by Licence, which indicated her family were of some social standing. 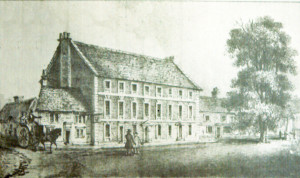 There were five children of this marriage. Their first born was a son, William. Sadly, two later sons both died during 1771, John when nearly two and Nathan at less than four months. Two daughters, Rebecca and Elizabeth, were both married by Licence in 1793.

Nathan Sample was recorded as eligible for jury service in 1784, but died a year later. So the ‘Mr Sample’ who called on Teedon in 1793 to ask him to come and teach the girls Writing was Mrs Sample’s son, William, then aged 28.
Did Rebecca Sample start her school upon her widowhood in 1785? Her husband, Nathan, had been a ‘laceman’, according to his jury service eligibility. This was a Lace Dealer, who sold on the lace made by the womenfolk in their cottages, at a greater price than he paid them, thus making a profit for himself. Nathan would have taken the lace regularly to London for sale. His journeys to London and back are confirmed by William Cowper’s letters. On 31st August, 1780 in a letter to John Newton, (who had by then moved to London) the poet wrote:

‘Many thanks for the Oysters which are come by Mr Sample’

Nathan Sample will be familiar to the readers of the letters of William Cowper, as the poet describes him as ‘wrong headed Sample’, for he obviously had strong opinions, not always popular! This is illustrated in Cowper’s letter to John Newton of the 11th April 1784: 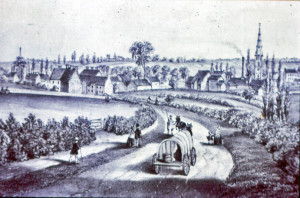 ‘The election (campaign activities of the various candidates who visited prior to the General election held on 21 April) has made a great noise in the steeple and some in the street, but at length we are quiet again. The Squire of Weston ( John Courtney Throckmorton) assisted in canvassing the town for Lord Verney* and met with several affronts, but was especially insulted by wrongheaded Nathan Sample; who it seems has much the same aversion to a Papist that some people have to a cat; rather an antipathy than a reasonable dislike.’

(*Ralph Verney, 2nd Earl Verney was the member for Buckinghamshire from 1768-84, 1790-1. On this occasion was defeated by twenty four votes.)

In a letter of 4 June 1785 the poet tells John Newton of the illness of Nathan Sample:

‘Nathan Sample has the putrid fever (typhus) that has carried off so many, is attended by Dr. Kerr (of Northampton), and yesterday blister’d on the head.’

Cowper recalls Nathan’s character in a letter to John Newton on 25th June 1785: 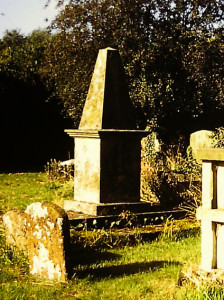 The Sample family’s grave and obelisk in Olney Churchyard

‘We enquired, but could not learn that anything memorable passed in the last moments of poor Nathan. I listen’d in expectation that he would at least acknowledge what all who knew him in his more lively days had so long seen and lamented, his neglect of the best things and his eager pursuit of riches. But he was totally silent upon that subject. Yet it was evident that the cares of this world had choak’d in him much of the good seed, and that he was no longer the Nathan who we have so often heard at the Old (Great) house, rich in spirit though poor in expression, whose desires were unutterable in every sense, both because they were too big for language, and because Nathan had no language for them. I believe with you however that he is safe at home. He had a weak head and strong passions, which he who made him well knew, and for which he would undoubtedly make great allowance. The forgiveness of God is large and absolute; so large, that though in general he calls for confession of our sins, he sometimes dispenses with that preliminary, and will not suffer even the delinquent himself to mention his transgression. He has so forgiven it, that he seems to have forgotten it too, and will have the sinner to forget it also. Such instances perhaps may not be common but I know that there have been such, and it might be so with Nathan.’

Did Rebecca Sample keep her school going until her death in 1809 when aged 76? She was buried on 21st January and a Mortuary Fee of ten shilling was paid in her name. This was a fee to the Church by those who could afford it.

A stone obelisk marks the Sample family grave on the south side of Olney Churchyard, sadly now covered in ivy and going for the sky! When my local history group undertook the recording of the Monumental Inscriptions in Olney Churchyard during the summer months in the early 1980s, one could easily read the inscription:

In Memory of Nathan Sample who died June 5th 1783 aged 53 years.
Also Rebeca his wife who died Jan 16th 1809 aged 76 years
and of two of their children John and Nathan
In memory of William Sample who died October 17th ….. 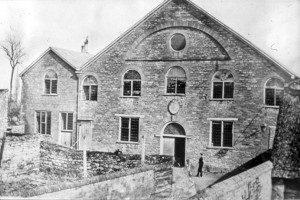 Unfortunately the year of his death was not recorded or illegible. However, as William’s will was proved on 12 March 1831, he is likely to have died the previous year in 1830. William and his wife, Catherine had a daughter, also called Catherine, whose baptism was recorded in the records of the Independent Chapel, thus:

Sadly, she died when only nineteen and was buried In Olney Churchyard on 4th May 1809, just 4 months after her grandmother, Rebecca.

William and Catherine were living in Bridge Street at the time of the 1821 Census , with a servant in what is now Newton House, No. 24. William was recorded as a Maltster.

Did William try and keep his mother’s school going for a couple of years after her death in 1809?

A Miss Mabley began her school on the south side of the Market Place circa 1811, so did she take over Mrs Sample’s school?
The next instalment will address Miss Mabley’s school. 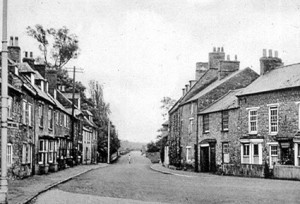 Mrs Sample’s School was most likely located at 24 Bridge Street – the first double fronted house with bay windows on the left. The photograph was taken in the 1940s.

Although there were no house numbers at this time, if one can pinpoint certain known properties (usually the pubs!), one has a fair idea of where the various ratepayers lived.

I had always felt sure Mrs Sample’s school was on the Market Place, but no Samples were recorded there, instead Mrs Sample is in the 1801 List recorded as being on the east side of Bridge Street, most likely in the property now No. 24, a double fronted house. By the 1811 List, her son, William is living there, as Mrs Sample had died in 1809.