THE DEVELOPMENT OF THE SHOP FRONT

The development of Garner’s shop acquired from Mr Hoskins essentially comprised four phases between 1886 and 1972 as shown in the illustrations and sketches below. Doubtless, other minor developments took place in the meantimes. The shop front from the final phase remained unchanged for many years until the property was sold and leased as a series of retail shop units. Oddly enough the site of ‘Mr Hoskins’ shop front has of late reverted to small paned windows. 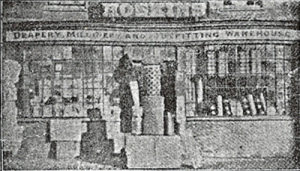 The series of sketches on the right showing the development of the shop front were kindly provided by Mr Roger Gooden, a grandson of Mr J J Garner. 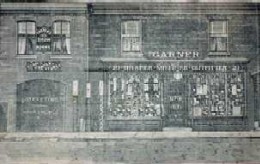 The illustration on the left is dated somewhere between 1886 and 1896. The property was then called Commerce House. The gateway was converted into a shop front in 1896. The brickwork of the rear archway (there in 1886) can still be seen (November 2013) above the back entrance to ‘Lily T’. 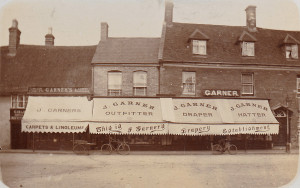 The photograph on the left was probably taken to coincide with the arrival of the shop blinds. 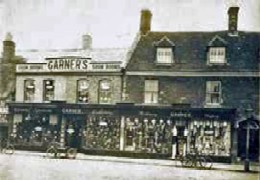 The photograph on the left was taken after completion of the shop front alterations on 20 September 1920. Mr Garner’s proud boast was that at 67 feet the shop front was the longest in Olney. The gas lamp outside No 22 was removed in September 1935.

In the photograph on the left, observe on the chimney stack above No. 20, the line of the thatch which was removed on 22 March 1936. Also the extra two feet of wall, above the top floor windowframes, added at the same time. 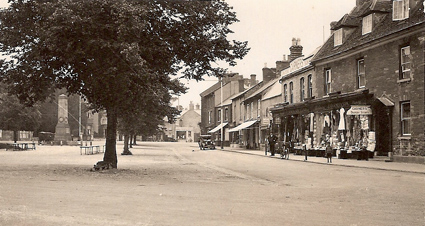 Visit the next page – Romance of the village shop