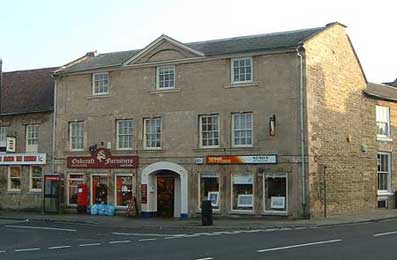 Site of Olney Post Office from around 1935 to 1980
The Post Office shop occupied the ground floor of the LHS of the building.
Entrance to the shop was through the door on the left under the arch.

During the 1940’s, the Post Office opened every morning at 9 o’clock, closed at lunch-time from one o’clock until two, and then closed for the day at six. On Saturdays, the staff had to stay on, often until seven o’clock, to balance the week’s takings. Wednesday was half-closing day, until changed to Saturday in the mid-1950’s. Because the Olney office was only a sub-post office, the organisation was fairly relaxed, with no signing in or clocking on.

Not only did the staff have to work in the post office, they also had to deliver the telegrams. They often used their own bicycles to travel out as far as Warrington, Clifton Reynes and Emberton. Not many farms and houses had telephones then! At this time, the telegrams were often delivered by Gladys Johnson, who worked at the Post Office for many years. She was helped occasionally by Miss Boyes, a lady of real character, who was then at least in her sixties, and very keen to help, reputedly because some of the farms where she delivered telegrams gave her eggs which she took home on her very old ‘sit up and beg’ bicycle. People who delivered letters were sometimes asked to do the strangest things! It is said that one person was expected to feed the feral cats living around the house; another had to check on an elderly lady, to make sure she was up and dressed. During that period delivering letters was also a form of social service!

The cost of posting a typical letter in the late 1940’s was tuppence halfpenny (1p). Postcards and unsealed mail, such as birthday and Christmas cards went for tuppence; there was no ‘First’ and ‘Second’ class post. People who had relatives living abroad could buy airmail letters (Air Letters). These were flimsy blue sheets of paper that folded up into the size of a standard envelope and cost sixpence – a tanner – just over 2p. The Post Office dealt with many other things then (as it does today), not just stamps and registered letters. In the late 1940’s there were dog licences at five shillings (25p) per annum, gun licences and gamekeeper’s licences. In 1945 each household needed an annual radio licence costing ten shillings (fifty pence) but rose to one pound in 1946. There were only a handful of television licences issued in Olney in 1946, these cost £2 for the combined black and white television and radio licence. Postal Orders for small sums of money, for example, one shilling or one guinea (5p or 105p), and Money Orders for larger sums, were also sold through the post office. Business for Postal Orders increased during the football season when people ‘did the pools’, as very few had bank accounts, and posting the coupon with a Postal Order was their main method of placing bets on the results of the matches. 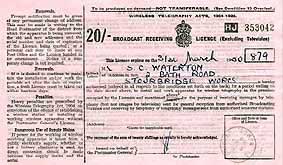 Old-age pensions and family allowances were paid out on specific days of the week. Family allowances were paid out on a Tuesday, a few surviving pensioners from the First World War were paid on a Wednesday and old-age pensions were paid on Thursdays and Fridays. Eventually Monday had to be added to cope with the increasing number of people qualifying for a pension. All these pensions were paid in cash for coupons in book form issued to qualifying individuals. For a long period, family allowance was not paid for the first child, only the second and subsequent children qualified; for some time it was five shillings a week (twenty-five pence) per child and then it increased to eight shillings (forty pence). Eventually the first child was included in the allowance.

In the 1950’s a member of staff was required to go to Barclays Bank to collect the money to pay the pensions and allowances, and then walk back to the post office, unescorted, carrying about two thousand pounds. Within the Post Office, this money was kept in a small till out of view. At Christmas, when larger amounts of money were involved, the money was kept in a built-in safe together with money orders and postal orders. 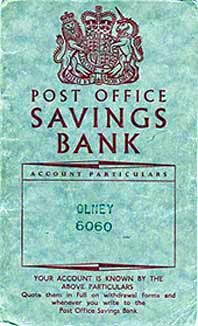 The Post Office also operated the Post Office or National Savings Bank. Savings books were issued and money could be deposited or withdrawn at any Post Office in the country. The interest paid on these savings accounts was fixed for many years at two and a half per cent. The money saved was often used to fund holidays or Christmas presents. Saving stamps could be purchased for sixpence (two and a half pence) or half a crown – that is, two shillings and sixpence (twelve and a half pence) – and stuck in a small book issued by the Post Office. Children were encouraged to use some of their pocket money to buy these stamps and so prompt them into the habit of saving money, possibly for a ‘rainy day’, but more likely to help fund a bicycle! Saving stamps were also sold in school and people can remember as children these stamps taking an age to total one pound. National Saving Certificates could be bought at the Post Office for fifteen shillings (seventy-five pence). The interest paid varied with each issue, as it does today, but then it was relatively high compared to that paid by High Street Banks and Building Societies. In the 1950’s these certificates were considered a very good tax-free investment.

Thursday was always a busy day at the Post Office, it being both Market Day and ‘Pensions Day’. In addition to Gladys Johnson, who worked there for many years, assistants engaged over the years included Dorothy Barber, Frances Liggins, Diane Wills, Kathleen Wogan, and Connie Pipes. People still talk of the time when each Thursday a member of staff would cross the Market Place to Mrs Looms’ café (opposite the Cowper and Newton Museum), even though that was the Post Office’s busiest day, to buy jam doughnuts for their afternoon tea-break. Mrs Loom’s doughnuts were always considered to be something special and were only made on Thursdays (Market Day).

Parcels could be sent by registered post. They were wrapped in brown paper, tied with string and sealed over the knots with sealing wax. To do this a stick of red sealing wax and a box of matches to melt the wax were kept in a drawer under the counter. Mr Hollingshead, the local horologer and jeweller, used to send parcels out in this way. Registered letters were usually put in special envelopes and these had to be signed for, on delivery. If they were in a plain envelope, these too had to be sealed with sealing wax over the flap and a large blue cross drawn across the envelope. 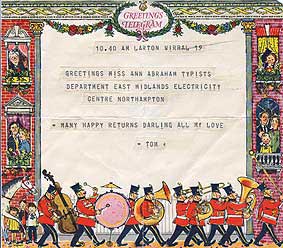 The Post Office had a public telephone in the shop, inside the door on the left, near the counter with the letter and parcel scales; obviously not the place to make confidential calls! When the Post Office was closed the nearest public phone was the one in the entrance hall of the Bull Hotel. When the telephone was removed from the Post Office around the 1950’s, a classic red telephone kiosk was sited outside the post office (where the black telephone kiosk is today, see photograph). Stationery was then sold from a marble topped table. The post office already sold tobacco and cigarettes. Eventually a lending library was added, offering light romances and Mills and Boon-style books.

The mail was pushed to the station, a distance of almost one mile, on a hand cart by Mr Johnson or Mr Horsefield. If the load was light, the mail would be carried in a smaller wheeled basket. The post was scheduled to catch specific trains to Bedford, the eleven o’clock train in the morning and the seven o’clock in the evening. The post coming into Olney from Bedford was picked up from the seven o’clock and two o’clock trains and brought back to the local sorting office at the rear of the post office.

Letters posted in the box at the Post Office were franked before they went to Bedford, and consequently had the ‘Olney’ post mark. This box was sited on the outside wall of the Post Office and was emptied directly inside the shop. Local mail was separated out to be delivered on the next available around. Consequently, provided a local letter was posted at the Post Office during the morning, it would be delivered in the afternoon. Immediately adjacent to the post box were two postage stamps dispensing machines. Letters collected from other post boxes in the locality were franked in Bedford. In the 1950’s there were only two post boxes in the town, the one on the Post Office wall and the other near Brocks Garage, set in Doff Kitchener’s farmyard wall. There were two deliveries of mail each day, excluding Sunday, to match the twice daily delivery of mail to Olney from Bedford. There was even a delivery on Christmas Morning, and a parcel post!