This Mill can boast of being the oldest recorded business premises connected with Olney. It was so important at the time of William the Conqueror that it was recorded in the Domesday Book which was compiled during the years 1081-1086, and there described as ‘a mill, yielding annually forty shillings and two hundred eels’. If rented at that time to such an extent it must have been even more important then than now and that is saying a good deal for every one for miles round knows or has some idea of the large and up-to-date Cowper Roller Mills of Olney. This mill was at one time worked in conjunction with the old Clifton one which stood at the foot of Clifton Hill. 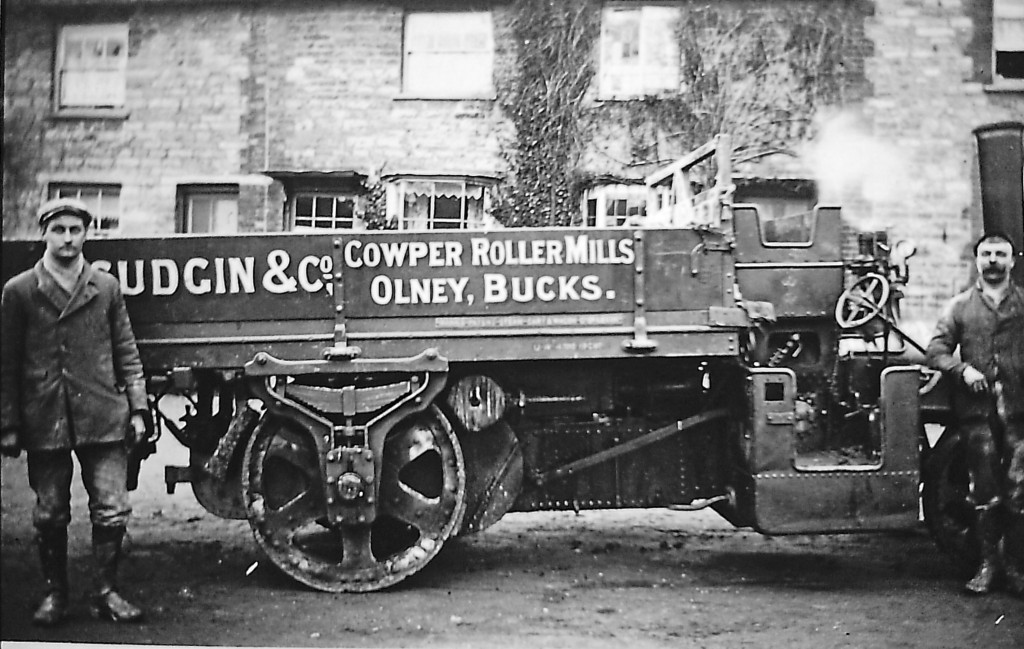 The following advertisement in reference to the two mills appears in the Northampton Mercury for October 21 and 28, 1771:- ‘To be Sold, at Clifton-Mill, near Olney, in the County of Bucks, Two Pair of French Mill-Stones, with Iron-Work and Brailes; a Shaft, Cog-Wheel, and Heads; Wallows, Counter and Geer Wheel; and Heads; Trow, Flats, and Hopper, and one ditto; Water-Wheel and Shaft, and Cog ditto; Wallows, Counter, Geer-Wheel, Axle, and Heads; and Flour-Mill, three Hoppers, Spouts, and Four-Tackle, all in good Repair. Enquire of John Barnard, at Olney-Mill’. 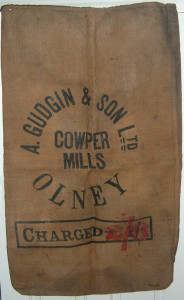 ‘To those unacquainted with milling or who have not seen the interior of the Cowper Roller Mills, I will endeavour to explain the workings of this well-appointed structure. It is a well known spectacle to all who indulge in rural walks across the fields, and they will notice it is a building of five storeys. The whole is so entirely filled with machinery that it looks impossible to move about with any degree of safety. It has, during the last twelve months, been entirely remodelled and improved; machinery added and every inch of space utilised in the most marvellous manner that the present day skill can suggest. The motive power comprises two water wheels, one estimated at twelve horse-power, the other, when a good supply of water is available, will drive from forty to fifty horse-power. Coupled with this is a forty-five horse-power suction gas-engine by Grice, Engineers, of Birmingham, which is powerful enough to work the whole mill.

The ground floor of the mill is used for sacking and packing ready for the steam lorry to carry the large consignments to the numerous customers within a radius of thirty miles. The first floor is devoted to the meal rolls and reduction plant which are placed in a bay, whilst the extensive and up-to-date wheat cleaning plant, erected by Simon Ltd, of Manchester, is at the north end of this floor. The second floor is taken up with purifiers, hanging sieves, etc. 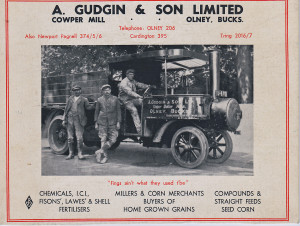 Photograph of another Gudgin Steam Lorry

The third floor contains the various centrifugals for dressing the different products from the rolls. The garners which occupy the fourth floor are very extensive, which goes without saying in a mill of such capacity, the largest holding 700 sacks of corn. The whole of the mill and outbuildings are lighted by a two and a half horse power dynamo by Christy, Bros, of Chelmsford.’

The photograph below indicates that the people of Olney enjoyed the river by the ‘Mill Piece’, as it was known, irrespective of any effluent from the mill. 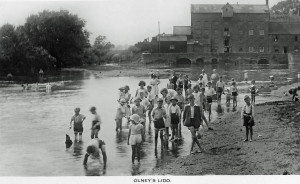 Direct Link to: The fortunes of the Gudgin Family