This article is based on the recollections of Cis Elderton (nee Emily Sparrow) when working at Harry Armstrong’s Lace Factory in Olney, first in Newton Street from 1928 and then in the High Street on completion of the new building. She left the Lace Factory in 1937 to get married.

Lace was produced to Harry Armstrong’s requirements by outworkers in the surrounding district. The Lace Factory was used to assemble the lace onto articles such as handkerchiefs and table linen, but perhaps more importantly, the building was used to market and pack the lace for shipment within the UK and abroad. 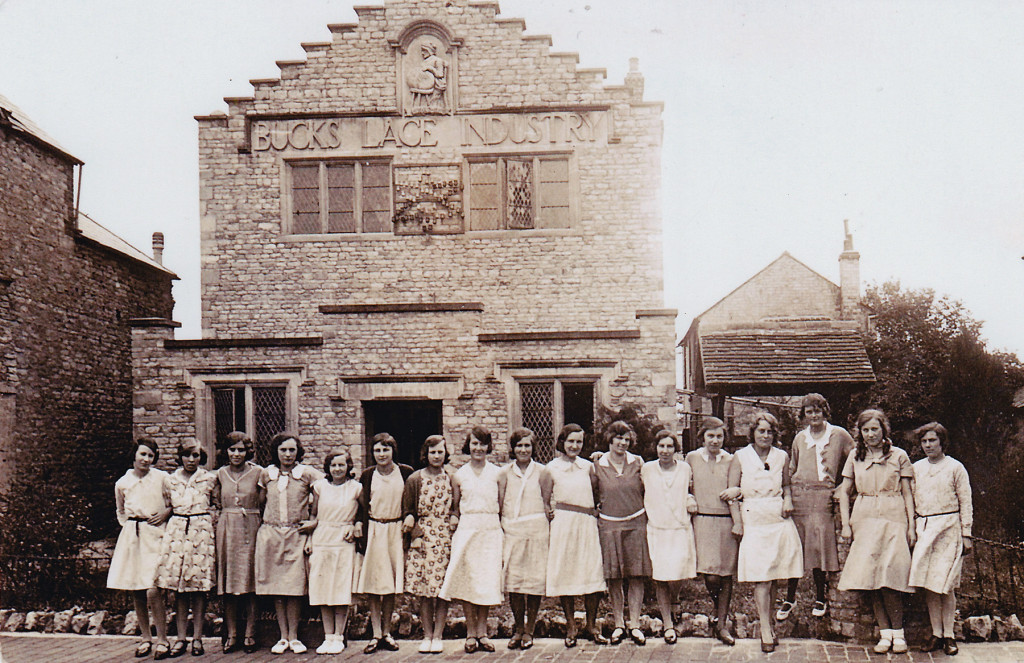 Cis left school at Christmas 1927 and went to work at Mann’s Boot Factory (now luxury apartments) at the junction of Midland Road and Wellingborough Road. The following August she decided that she would like to work for Harry Armstrong at his Lace Factory. The factory was situated at the corner of Newton Street and Midland Road where now there are houses. Her mother made an appointment for Cis, who was then aged 14, to see Harry. He sat behind a desk and asked if she could play the piano. When she said that she could, he was very pleased because he thought she would be able to learn to type. He said she could start the next week for a wage of five shillings per week.

The Lace Factory was open Monday to Friday and Saturday morning. Cis started at half past eight and worked until half past twelve. The girls were given an hour and a half off for dinner and then it was back to work at two o’clock until closing time at five. The first job that Cis had was sewing lace-bordered handkerchiefs, doilies and collars on to blue paper. This showed up the intricate pattern of the lace. Lace by the yard was folded into a length of about three yards. Again, the first few inches were sewn on to blue paper to show the pattern. Several girls were employed to do this. These samples were then sorted and packed into parcels and were sent to the ladies who had an account with Harry Armstrong. Twice a year the parcels were sent out after the contents of each had been listed in a duplicate book.

When Cis had been at the factory for some time Lil Tarpley, the forewoman, asked her to be responsible for the Duplicate Book. Her pay rose to 7/6 a week. Then she became Ledger Clerk. Armstrong’s had their own mail bag which was taken to the Post Office each day by one of the employees. About thirty or forty parcels were sent out daily including a large number to South Africa and India. Mostly the lace was sent on approval – ‘on appro’ – that is, the recipient could choose what he or she wanted to buy. The remaining items were then returned to the factory together with the money for the purchases. The returned parcels were picked up from the Post Office, checked back in and taken upstairs to be unpacked. It was the responsibility of the Ledger Clerk to enter the various amounts of lace and cash from the Duplicating books into the account of the ladies to whom the parcels had been sent and the returned pieces of lace were put back into stock. When Dot Cattle died, Cis took over the task of opening the parcels, taking out the money which was then banked.

In the late 1920’s there were between fourteen and sixteen employees at the Lace Factory. Miss Tarpley was very strict. She did not allow any talking. Six girls sewed lace on to tablecloths and other small items, and when sewing the lace onto handkerchiefs and doilies, the girls were told they had to make very small stitches, but not all of them managed to do this. This work was also done by outworkers. People from the outlying villages brought lace to Harry Armstrong’s for which they were paid. At the beginning Harry had a great deal of help from his sister, Hilda, but although he had an eye for the ladies, he never married.

In 1928 the Bucks Lace Industry building was completed in the High Street and the employees moved in before it was quite finished. George Knight was in charge of the building and the workers were paid directly by Harry Armstrong. Eventually Harry was to live in the top floor of the building. Cis had to nag Harry many times to get the cheques signed to pay the bills. He was quite eccentric and would often be seen sitting or walking around in his pyjamas. He was reluctant to pay for administrative staff; he preferred to pay for production. Even so, there were three typewriters to help deal with the paperwork.

The lace was made by local women in their own homes and they had to buy their materials from the factory. They were paid a pittance for lace made by the yard,. The narrowest lace, that which was called ‘ninepin’, would earn fourpence, wider lace, twelve pin or ‘spider’, could earn them sevenpence. This one was sewn onto handkerchiefs. The widest lace would earn them a shilling a yard. Lace for tray cloths, which involved turning four corners, was the best paid, and for that, they could earn four shillings and sixpence.

Harry produced a 128 page catalogue listing and pricing the extensive range of products sold under his ‘Bucks Cottage Workers’ Agency’ tradename. Three pages from the catalogue are shown below to illustrate Cis’s statements. 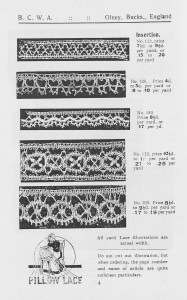 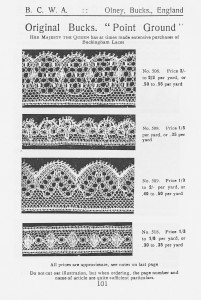 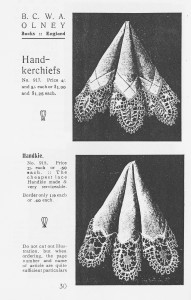 The finished lace was brought to the factory on Thursdays, being market day, and Harry would buy all of it and keep it in the stock room. For ‘special orders’, he would specify his needs. In the summer Cis used to cycle to Yardley Hastings with her tape measure and buy lace at the door. She had six ladies to visit who made lace including one whose work was particulaly beautiful. Cis would often return two weeks later for more and these ladies were always pleased to see her.

Cis worked at the Lace Factory until 1937, when she left to get married to Fred Elderton.

Harry’s Lace Factory was used by the army during the remaining years of the Second World War and then used by Polarizers Ltd. In the 1970s the premises were again taken over and became a successful lampshade factory. Later, in 1988, it was converted into flats and apartments.

Olney’s Cowper and Newton Museum houses a large wall case of antique bobbins, the collection of Harry Armstrong, and a model of a lacemaker’s light.