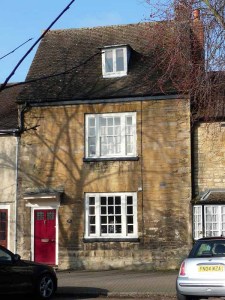 Walter Pennington Storer (WPS) and his mother, Elizabeth, came to Olney on 31st October 1849 arriving about nine o’clock in the evening, having left Oxford earlier in the day. His object was to establish a school at 75 High Street, a house belonging to his uncle, Josiah Storer, which Walter was able to buy four years later.

This school, which he called ‘St. George’s College’ opened on Monday, 14 January 1850 and provided instruction in Reading, Writing, Arithmetic, English Grammar, Scripture, History, English History, Geography, etc. etc. Terms were Fifteen Shillings per Quarter for children over Eight years of age and Twelve shillings per quarter if under 8 years of age. There were to be no extra charges, except for Books!

As the 1851 Census lists Walter as the only occupant, an unmarried 39 year old, his establishment would appear to be just a private day school. His mother had died earlier that year on 28 February. Walter Pennington Storer married Sarah Hull, the ‘girl next door but three’ on 8 January 1852. By the time of the 1861 Census they also had a servant, Hannah Pateman, resident in the house. These two Census records confirm that Storer’s school was a Day School, as there were no resident boarders in the property,

Part of WPS’s School Account Book No. 2 is still preserved amongst the Gough Papers at Aylesbury Museum. The first Account Book was stolen or lost from Olney in August 1886, after the death of Sarah Storer. Apparently it contained lists of the names of pupils, their eventual occupations and whether they were good, indifferent, or bad! 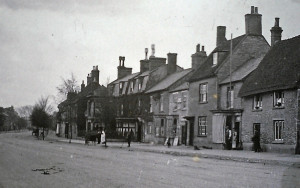 The 21st January 1858 issue of ‘Ye Olney News’, (a handwritten, and at times facetious, newsletter circulated amongst the friends of WPS) records that:

George Croxford was the son of the saddler on the Market Place, and the Foskett brothers were the sons of the Innkeeper of the ‘Two Brewers’ in the High Street, while Joseph ‘of Chichley’ was presumably the son of the ‘Big House’ there.

A year later in the 15th February issue, another list is given of new members of St. George’s College for the Hilary Term: Edwin Davison, son of Joel Davison (a grocer on the Market Place); Frederick Parris of Lavendon; William Thomas Marriott of Olney, whose father was Innkeeper of the ‘Saracen’s Head’ on the Market Place; William Skevington of Warrington (hamlet to Olney) and Josiah Henry Robinson of Castle Ashby, whose father was Steward to the late Marquis of Northampton. This list again confirms that all the above scholars were local boys who went home in the evening. 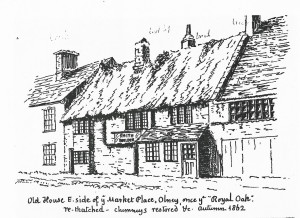 Sketch by Walter Pennington Storer, an accomplished artist, of No 20 Market Place, site of the former Royal Oak Inn.

The School was held in a thatched single story building in the garden of Sarah Hull’s former home.

Walter Pennington Storer died at the early age of 55 on 15 December 1867 and was buried in Olney Churchyard. We have much to be grateful to him during his short 18 years residence in Olney, for he and his friend, Henry Gough from Redhill, Surrey collected lots of local history information with a view to publishing a historical book on the area. Unfortunately, this vision was curtailed with Walter’s early death, but thankfully all their researches are preserved, in their original brown paper bundles tied up with pink tape, in the Muniments Room underneath the Museum at Aylesbury. They were deposited with the Buckinghamshire Archaeological Society by Henry Gough’s widow. They are available to view, by appointment, on Wednesday mornings only.

From these bundles at Aylesbury I learned of another school further down on the same side of the High Street, which was known as the Lower or North End Schoolroom. Amongst the Gough Papers, I found a poster advertising the opening of this new schoolroom:

THE OLNEY NEW SCHOOLROOM
Licensed by THE BISHOP OF LINCOLN [Dr John Kaye] FOR DIVINE WORSHIP
Will be opened on Wednesday next May the 6th 1840
WHEN THERE WILL BE TWO SERVICES
The former commencing at 3 o’clock in the Afternoon The latter at 7 in the Evening
Collections will be made at the Doors after both Services towards defraying the expenses of the fitting up of the Room etc. when the liberality of the friends of PUBLIC WORSHIP and SCRIPTORAL EDUCATION is earnestly solicited.
N.B. As the Room is but small, it is respectfully suggested that the Evening service should be appropriated more particularly to the labouring classes, who will have ended their day’s work, though none will be excluded who can be accommodated at either service. And it is hoped that those friends who cannot conveniently attend will send their donations by friends.
Hymn Books to be used at the New School Room may be had of the Vicar, and Mr Collingridge 6d. each. Labouring people may have them cheaper, on application to the Vicar.

Sometime after the discovery of the above Poster, when there was a new incumbent at the Parish Church and I was going through the papers in the Vestry cupboards with him, I came across the actual document of the Bishop of Lincoln’s Licence for Divine Service. It also gave the reason why the new schoolroom was built. The document is dated April 27th 1840:

LICENCE to perform Divine Service in the new Schoolroom at Olney, Co: Bucks.

John by Divine permission Bishop of Lincoln, To all / Christian people to whom these presents shall come, Greeting / Whereas it has been represented unto Us by a Petition under / the hands of the Vicar, Churchwardens and other Inhabitants of the / Parish of Olney in the County of Buckingham and our Diocese / of Lincoln, That in consequence of the Parish Church being situate at / the Southern extremity of the said Town, many of the Inhabitants / residing at the Northern extremity thereof experience great / difficulty in attending Divine Worship in the said Church / especially in bad Weather; And whereas the said Vicar, / Churchwardens and Inhabitants have Petitioned Us to grant / our Licence for the celebration of Divine Service in a new School / Room lately built at the northern extremity of the said Parish, / being of the following dimensions, namely, sixteen feet in / width by thirty feet in length or thereabouts; Now know / ye that We the said John Bishop of Lincoln being desirous of / complying with the said Petition, Have thought fit to grant, and by / these presents Do grant our leave, Licence an Authority (during / our pleasure only) to the Reverend Daniel Baxter Langley DC.L./ Vicar of the said Parish and his Successors and his and their Curate, / and to such other Minister of the Established Church of England and / Ireland in Holy Orders as shall be approved of by Us or our Successors, / and to all other persons residing within the said Parish and / neighbourhood thereof, to resort to and assemble in the said / School Room, and therein to perform and celebrate Divine / Service according to the rites and ceremonies of the united Church / of England and Ireland, but not otherwise or in any other manner / Given under our hand and Episcopal Seal this twenty fifth day of April in the year of our Lord one thousand eight hundred / and forty, and of our Translation the fourteenth.

(Note: The forward slash / is used in the above transcription to indicate the end of a line, as it was written as a solid block of text.) 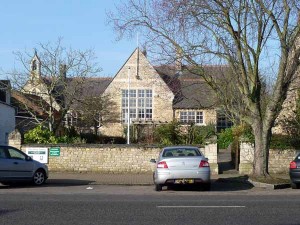 Presumably the site of the Schoolroom. This site was later developed for The Board School and later again for Olney County Primary School. It is now The Olney Centre.

Back amongst the Gough Papers, I learned of Walter Pennington Storer’s actual thoughts about this building, which were not very complimentary!

There is a place down here called a Chapel of Ease that wants burning down and a most wretched place it is – it is united to a barn, thus it is not straight either.
There is a sketch of a two gable ended, semi-detached building, one with a Bell Turret.
The turret contains a bell which may be seen by opening a cupboard from ye outside. The West Window is ornamented by shutters and a bar. The bell formerly belonged to a schoolmaster in the town, T. Haddon, used by him for the purpose of bringing the boys in.
Ye Chapel or School Room at ye North end of the town built by Lord Dartmouth in 1839.
Dec 14 gutter laid (foundations) later in the month windows put in. It is supported by voluntary subscriptions.

As this was written on 12 June 1840, nine years before Walter came to live in Olney, readers need to be aware that Walter had relations living in the town and at Emberton, so he would have visited regularly, and may have even begun collecting local material by then. One of Walter’s Emberton relations’ descendants, Canon Margaret Sedgewick, has been delving into the Storer ancestry and says , ‘I found (from The History of Middlesex ) Walter Pennington Storer, clockmaker, had retired to Olney in 1840’. (This date is incorrect by nearly 10 years!) She goes on to say a Robert Storer founded a firm of clockmakers in 1743 at 11 Berkley Court, Clerkenwell.

Later Henry Gough recorded that the building, ’built as a schoolroom, but licenced for Divine Worship, now used for weekday lectures and an infant school’.

That this schoolroom was used as an Infants School is confirmed by the Local Trade Directories of 1864 and 1877 which list an Infants School in the High Street, with Mrs Sarah Horn as mistress. The site of this Schoolroom was on land owned by Lord Dartmouth, formerly Brandon’s Farmyard, and later the site of the Board School and Olney Primary School. It is now ‘The Olney Centre’ with a Playgroup and the Town Library.

The next installment talks about Mr Thomas Wright and his Cowper School.