This letter written in the early 1990’s by Percy Wright on the subject of The Electric Cinema, Olney was originally published in The Bucks Standard, a local weekly newspaper printed in Newport Pagnell It is the fourth letter to come to the notice of the Olney & District Historical Society, the other three form another article ‘Three letters to friends’on this website. The Olney & District Historical Society would be interested to learn via this link information@olneyhistory.org.uk if any other such letters remain in existence.

The newspaper clipping originally belonged to the late Edna Moye and was provided by her daughter, Pamela Morgan.

The letter has been minimally edited for clarity by the Olney & District Historical Society. Percy’s anecdotal tales are very amusing but nevertheless, we are confident that Percy would wish us to note on his behalf that his memories of some events may not necessarily be as others remember them. 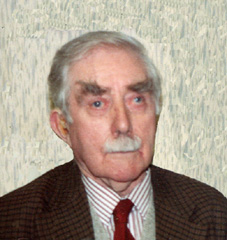 Many years ago, at the turn of the twentieth century, Mr Lewis Thompson, who was an Olney grocer at 9 High Street, had a hall built to be used for concerts, meetings and dancing, and having a stage, was very popular. Often at Election Meetings it got very rowdy with hecklers and the different supporters almost fighting between themselves; we were glad to get out safely and go home. The name given to the building was ‘The New Hall’ and this was used by the townspeople for many years.

Some years later, in 1919, it was bought by Mr Clifford, who altered it into a Cinema. Outside along the front was a low brick wall with iron railings on top. The opening from the street was through an iron gate, and the Hall stood back about six yards, with two steps leading up to the two front doors, and inside these was a large vestibule. The ticket office or pay desk was fitted on the right hand side, and the projection room was built over the front porch, with an outside staircase leading up to it, all in the open to the weather. At the left hand side of the iron fence was another iron gate through which tradesmen etc, were able to go down beside the building to a little cottage at the rear, and this was the home of the different proprietors. The first proprietor was Mr Clifford. He had a wife, who was known as ‘Madam’ Clifford, and a teenage son Ray. 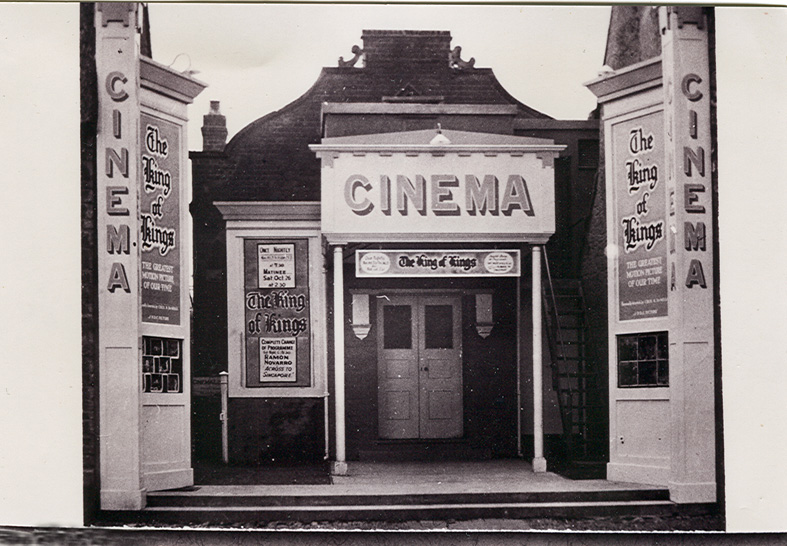 The film being shown was the 1927 ‘King of Kings’,
a silent film directed by Cecil B de Mille – an iconic film of its day.
Photograph kindly supplied by Alan Richardson

Seats were put in; those near the screen were more like forms, and behind them came the wooden single tip-up seats, then a few rows with padded seats, and the seats at the rear, just inside the left hand side of the hall, were plush padded, with arm rests, and the floor for these had been made a little higher so that people could look over the heads of those in front. The prices were, front seats, tuppence halfpenny in old money, and if a crowd should arrive, us children had to sit on the floor. The next seats were sixpence, then eight pence, and the ‘posh’ back rows were one shilling. The screen was fixed on the stage, and the lighting was so dim that someone always had to direct us to our seats by the light of a torch.

Now everyone is in, and sitting patiently, hoping that the people in the seats in front of them will sit still, as it being a flat floor one had to get in a position to see between them and sometimes this got very uncomfortable. Now everything is ready and from the back, down to the piano, goes ‘Madam’ Clifford, walking much like a Duchess, and when she is sitting comfortably on the piano stool we are plunged into complete darkness. Mr Chapman starts the performance by turning the handle to put the film through the projector. As the story unfolds ‘Madam’ Clifford plays very softly and slowly if it is a sad scene, and fast and loud if it is galloping horses or fighting cowboys and indians.

All the reels came packed in metal containers, each one separately, so that at the end of Part one the lights would come on just a glimmer for Mr Chapman or Mr Clifford to see their way through the cinema to put the reel safely in a fire-proof room under the stage. They took out Part two, fixing it into the projector; out go the lights, ‘Madam’ starting up the music again and so we continue until Part two has run out and Part three is needed, and so it goes on until the end of the story.

During the interval, ‘Madam’ comes round with chocolates and sweets etc, which she had ready on the piano, and then on with the last part of the programme, finishing always by playing ‘God Save the King’.

At the first house, six o’clock on Saturdays, inside was the man we knew as ‘The chucker-out’, namely Sid Brundle, and if any of us boys changed seats or started making a noise before the programme started, we were warned once only; if we didn’t do as he said, his word was law, we were sent out.

One evening the film caught fire in the projection room, and Mr Chapman’s hands were badly burned as he was busy turning the handle. Believe it or not, but this is true, the film that was being shown that night was “The Eternal Flame”. Can you picture in your mind how other accidents might have happened, as the projectionists went up and down the outside staircase, whatever the weather? 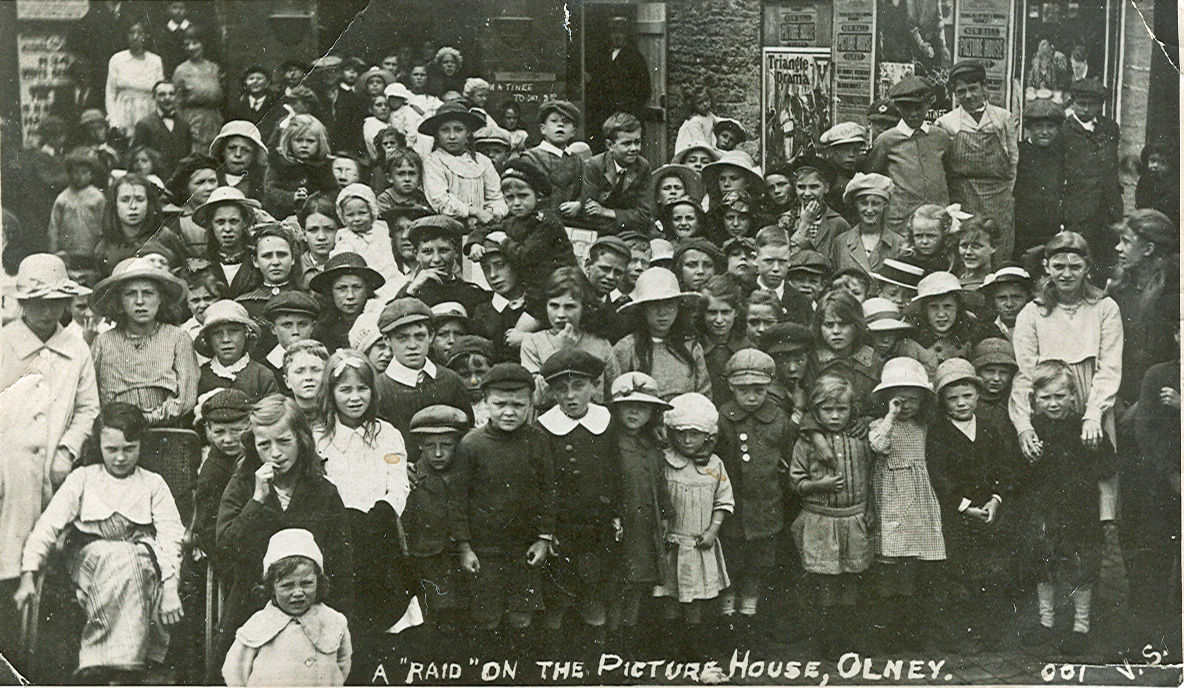 The well-published postcard/photograph taken outside the cinema around 1920

A little later after this mishap the cinema changed hands. Mr Pointz bought it and did some more alterations, putting in a large curved screen and this was a big improvement, and Mr Chapman was soon back. He worked most of his life at W. Pebody’s tannery at Olney, but was always on duty and on time for every performance. Our local blacksmith named Alistair Bull married one of Mr Pointz’s daughters, and he was at the cinema to help Mr Chapman each evening after he had finished his day’s work. What a change from doing one of the oldest trades to the most modern in those days! When Mr Pointz sold out to Mr Webster and moved away, we missed seeing his large bulldogs walking around as we queued up to go in. We were very lucky, because Mr Webster was a film distributor, so he was able to show the up-to-date films; in fact, this became so well known around the area, that a coach ran from Newport Pagnell, picking up at the villages and bringing them to The Electric Cinema, as it was always known, twice a week.

It was a sad day for Olney when Mr Webster had to move away because of his work. He sold the building to the boot and shoe manufacturers named Sudborough and Wood from Wellingborough. By then we were really enjoying the ‘Talkies’ as they were called.

Ed. Note: The last programme shown at this cinema was Fred Astaire in ‘Three Little Words’ on 28th June 1952.

Please click this link for the addendum derived from information provided by Trevor Yorke. The addendum contains several pocket sized programmes issued between 1948 and 1949 which provide a good indication of the range of films available to Olney residents. This addendum also summarises the developments to the Picture House property undertaken between the closing of the cinema in 1952 and the present day.

Before you leave this page, why not check out the original 1927 trailer of the above film ‘The King of Kings’:.