Judging by the number of Sowman children that attended Thomas Wright’s Cowper School, there was obviously a close relationship between the Sowman and Wright families. This relationship was enhanced by the marriage of Edwin Sowman to Martha Elizabeth Edwards, the sister of Thomas Wright’s wife. The names of the children and staff in the photograph are identified from Elizabeth Margaret (Betty) Fairey’s own notes. Betty was the second daughter of Edwin Sowman, one of the founders of Sowmans. 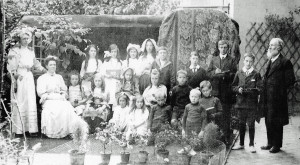 Thomas Wright (1859-1936) was a literary man who had a number of biographies and books published. In 1882 he opened a private school in Olney and, after his marriage two years later, was helped in the school by his wife. In 1890 he arranged a collection of his Cowper manuscripts and relics and staged a small exhibition, from which time he nursed the idea of a permanent museum in the town. In 1899 he approached Mr W H Collingridge, the owner of Cowper’s House, and persuaded him to present it to the town. This wonderful legacy to William Cowper and John Newton is thriving more than a century later.