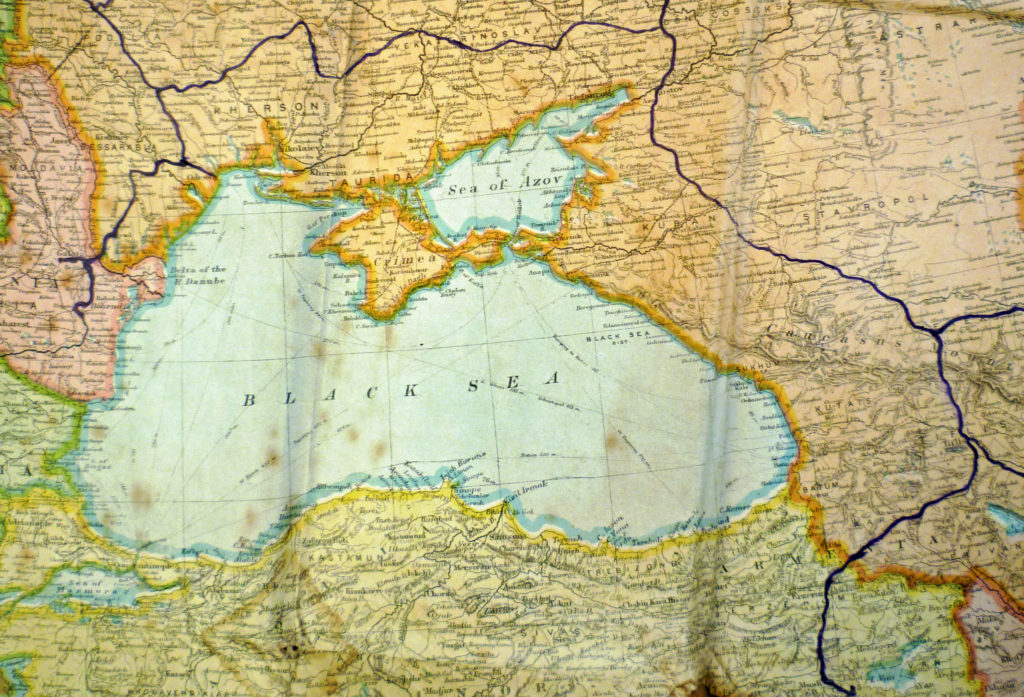 Tom’s map showing his journey from Kars to Odessa
– On route from the Turkish to the Roumanian and Galician fronts
(Click map to see detail.)

Editor’s Note The train journey back to Rostov included the town of Baku to circumvent the Caucuses.

Nov 1, 1916 Arrive at Odessa. Feel rotten. Buy some white bread. Two more in hospital on the train with the same complaint as myself.

Nov 4, 1916 Banquet for all our fellows, except those who are sick.

Editor’s Note: Please use the more detailed map below to locate place names on Tom’s map.

Nov 18, 1916 Wakened at 6am. Dark, cold and raining. Told to pack up ready for leaving the train. Spend the night in disused Cinema. Sleep on the stage.

Nov 23, 1916 At Rene, the frontier town of Russia. Leave train and go aboard barges on the river Danube. Sleep in dark, dirty hold. Only river water to drink.

Nov 24, 1916 Loading barge with cars, stores and ammunition. I buy some good liver.

Nov 26, 1916 Still being towed up the Danube with seven other barges.

Nov 27, 1916 Arrive at Harsova. Fetched out of bed at 11pm to commence unloading. Set foot on Roumania with a box of biscuits on my back.

Nov 28, 1916 Go through the ruined town of Harsova to the Church which we make our billet, there being very few places left with a roof on.

Nov 30, 1916 Busy washing clothes in the garden of our house. Put up a stove which we found in some ruins. Decorate the room with plants.

Dec 1, 1916 Make a lamp with a tobacco tin and some petrol. Clean up the garden in the morning and football in the afternoon. Have to fetch all water from the Danube. Some fellows lost.

Dec 10, 1916 Aboard the barge and then have to go ashore again on guard with the maxims.

Dec 11, 1916 On barge again. News of enemy advancing, fear of being cut off at Braila. Living in the holds again.

Dec 12, 1916 Sailing down the river. Have to have a candle alight all day down in the holds. Bully and black bread dinners.

Dec 20, 1915 At Rene. New armoured cars arrive by train. Turned out at night because one of the cars are stuck in the deep mud.

Dec 24, 1916 Have to help unload a barge belonging to the Scottish Women.

Dec 25, 1916 Christmas. Leave Rene for Galatza. Back again. Salmon for breakfast, Roast beef and peas, Pudding for dinner
Cake and tarts for tea. Coffee and cheese for supper.

Dec 26, 1916 At Galatza. Rabbit for breakfast. Bully and beans for dinner. Joe and I fry some potatoes, pinched at Rene. Clean Vickers gun.

Dec 31, 1916 ‘B’ squad leaves Galatza for the front. Raining hard. Spend the night with some Roumanian soldiers.13 of us and 6 of them in one very small room. Not room to turn round on the floor.

Jan 1, 1917 Resume our journey at dawn. Arrive at Tudorvladimersck. 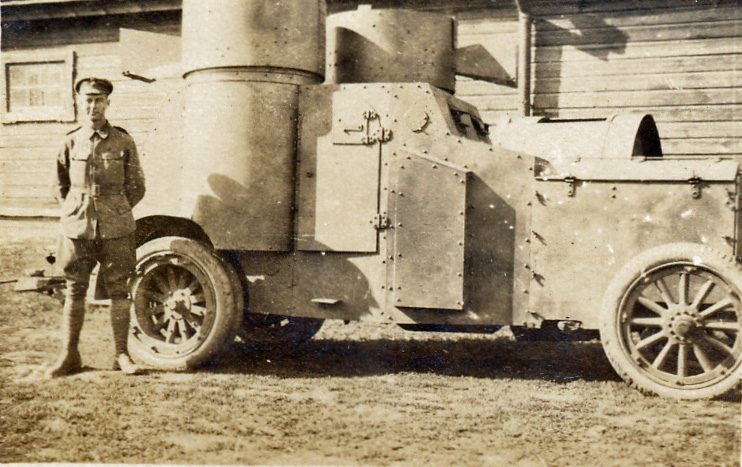 Jan 2, 1917 Eight of us have a room in a Roumanian house. Do our own cooking. Get a Daily News from a German prisoner.

Jan 4, 1917 Flour and water pancakes for dinner. Plum Duff for tea. Unable to get bread.

Jan 6, 1917 Return from Tudororvladimersck to Galatza. Breakfast at 7 Next meal at 4 pm. Working until 2 am loading up barges again.

Jan 7, 1917 Back at Rene again. Have a little snow. Unloading barges and putting stuff on trains. Sleep in large factory.

Feb 4, 1917 Leave Tirasol with Joe for Odessa on the teeth stunt. Travel in truck with men and women. Arrive at Odessa at 2 am and sling our hammocks in the main station.

Feb 5, 1917 Go to our barracks in drovskies after spending a very cold night.

Feb 14, 1917 Visiting the lady dentist every day. Tell her not to hurry. 35 Kopecks a glass for coffee. Have a look round the town in the evenings. Very cold. Inoculated again. 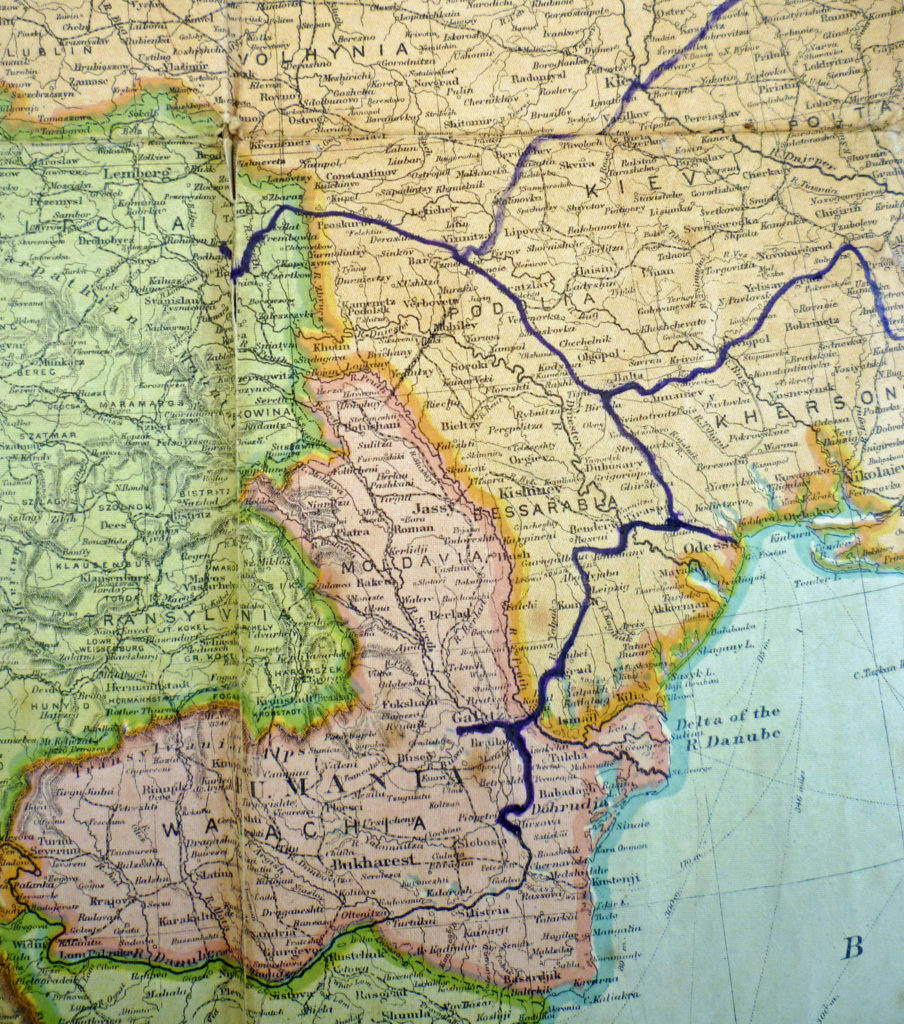 Feb 15 to Aug 8, 1917 Leave Odessa and go to Roumanian front. Spend Easter in the trenches. Go on to the Galician front and loose our gun in the retreat, and a number of our fellows killed and wounded.

Editor’s Note: During this period, following the heavy loss of life in WW1 and food shortages, the Russian citizens created civil unrest leading to the abdication of Czar Nicholas 11 and the establishment of a provisional government.

Aug 8, 1917 At Pruskurov having a rest after the retreat from Austria. Living in a good billet.

Aug 15, 1917 Have a big feed of onions and potatoes. Living in our armoured car. 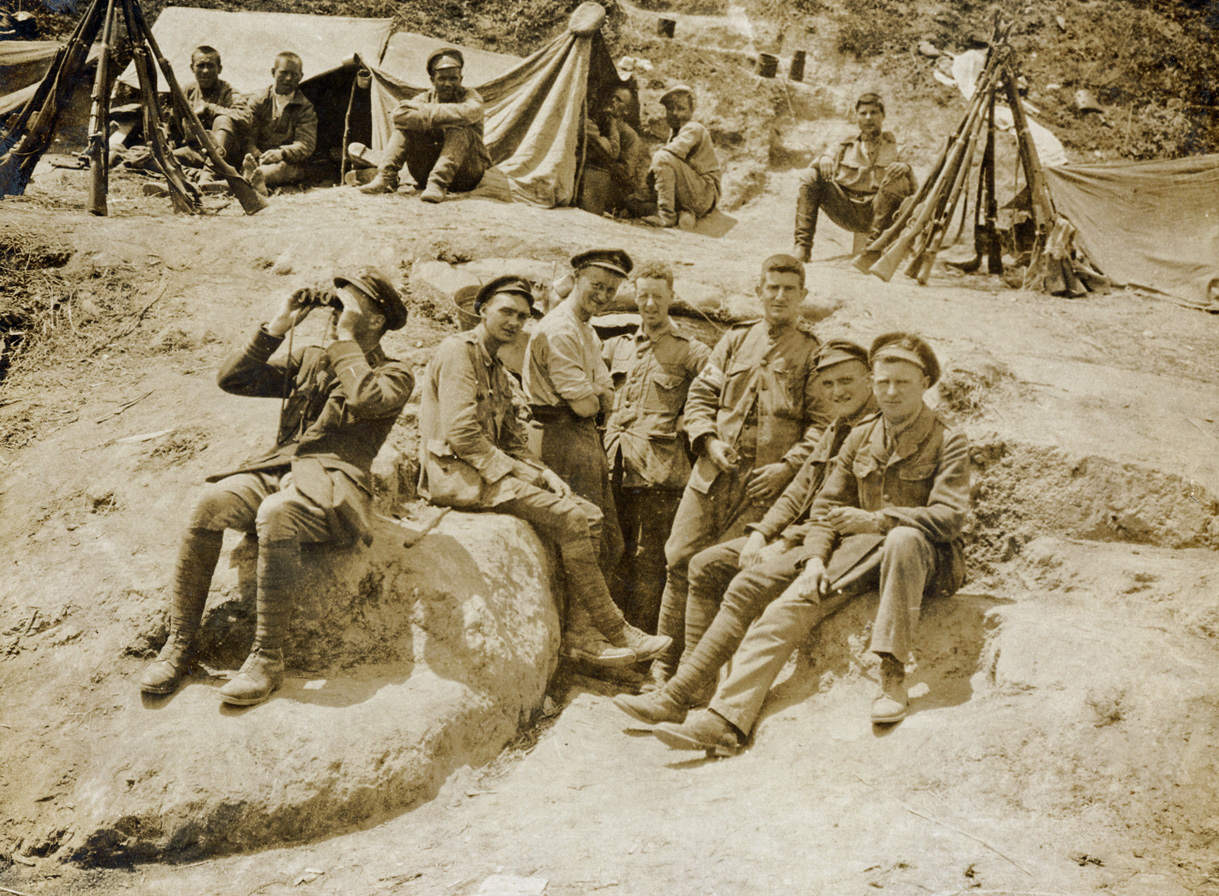 Aug 23, 1917 Mail arrives. Heaps of stuff. 3 fellows return to base with dysentery. Millions of flies and mosquitos.

Sept 1, 1917 Doctor inspects us all for scarlet fever. 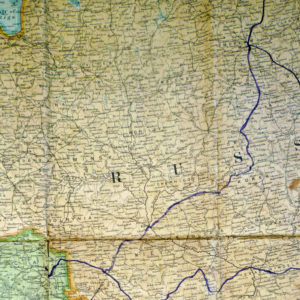 Sept 11, 1917 Leave Dubrovke in the morning for Proskurov station. Packing up. Aboard the train. Still living in armoured car.

Oct 5, 1917 Sale of stuff belonging to men killed in action.

Oct 8, 1917 Hear about possibilities of going home on leave.

Editor’s Note: It is believed that the ‘Benvenue’ was torpedoed and sunk in the Atlantic Ocean on 14 May 1941.

Editor’s Note: In October 1917 the Bolshevik party in Russia overthrew the government and, led by Lenin, established the Communist state.

Nov 2, 1917 Heavy sea. Boat rolling. Unable to sleep. Tins, plates, boots pickles and jam rolling about on the floor. We have no escort.

Nov 7, 1917 Arrive at Kirkwall in the Orkneys. Leave port in the evening.

Nov 11, 1917 Sail again and reach Dundee, our destination. Have some leave in the town.

End of Tom’s Service with the Royal Naval Air Service

Editor’s Note: In December 1917 Russia concluded an armistice with Germany and in March 1918 the Treaty of Brest-Litovsk formally concluding their involvement in WW1.