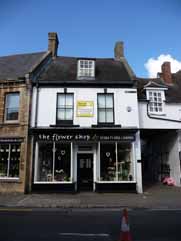 No 1 Market Place, 2012
Click on image to enter ODHS Buildings Database for this property

Number 1 Market Place on the south-west corner of the Market Place was, and still is, a prime site for a shop.

At the time of the 1841 Census, John Toon was the shopkeeper and lived there with his wife, Mary (nee Godfrey) and two teenage assistants, Edward and Catherine Eyles (a nephew and niece of Mary). John Toon had been in business there as a grocer at least since 1833 when his name appears as one of the ratepayers for the Poor Levy of that year. He is listed as a ‘wool dealer’ in a trade directory of 1844, which probably meant that he dealt with fleeces and used the animal fat for candle making, hence he was also a tallow chandler. He also used the extensive buildings running up the side lane (later known as Eyles Yard).

Additional research by the family’s descendants has established that the nephew and niece are two of the children of Mrs Toon’s sister Elizabeth who married Charles Eyles (himself a grocer at Olney when they married in 1814).

In the 1851 Census, John Toon is recorded as widowed, his niece Catherine Eyles as housekeeper and his nephew Edward appears to have moved on.

By 1878 Mr T Eyles (probably Thomas, another of Mary’s brothers) advertised the business as ‘late J Toon’. Incidentally, Thomas and Catherine are donors of the church bells as commemorated in the brass plaque.

Mr Eyles had an assistant and this ‘principal representative’, Mr Arthur Timperley, took over the business upon Mr. Eyles’s retirement. In the 1910 Inland Revenue Land Survey Mr W Godfrey Eyles is recorded as the owner of No. 1 Market Place and Mr Arthur Timperley as the Tenant. By this time, glass and china, and wines and spirits, were stocked and sold. In 1911 Mr Timperley and his wife Annie, three daughters and a son resided at No. 1 Market Place and he continued there into the First World War. 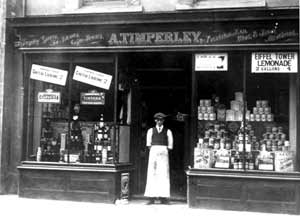 Mr Arthur Timperley standing in the doorway of his grocery shop c.1900

By 1920, a change of trade took place and Arthur Hopper ran the Post Office and dealt in confectionery from this corner site. The Register of Electors confirmed that he ran the Post Office at Number 1 in 1936 and probably continued there almost to the end of the 1930’s when the Post Office moved across the road to No. 37 Market Place. In 1939 Deryck Humphriss used the premises as an Optician.

Also, listed in this 1936 register are Albert and Elsie Boswell who may have lived at the rear of Number 1. Both Arthur Hopper and the Boswells are recorded as living there in the 1951 Register of Electors

Another major change of use occurred during the 1950s when Stanley Woods, the reproduction antique furniture manufacturer, used No. 1 Market Place and the full length of the buildings behind the shop as salerooms to show and sell his products. The products were very reasonably priced and manufactured in the converted Hipwell’s Brewery (now the site of the Co-op supermarket) behind the Bull Hotel . The furniture became popular very quickly and the business expanded extensively during the 1960s and 70s. The shopping complex at No. 1 Market Place started to trade (somewhat controversially at first) on Sunday afternoons and brought a major influx of visitors into the town. Other businesses around the Market Place were quick to take advantage of this business opportunity which lasted until the popularity of Stanley Woods furniture declined in the 1980s. 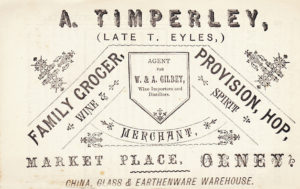 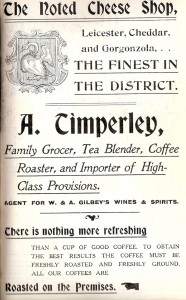