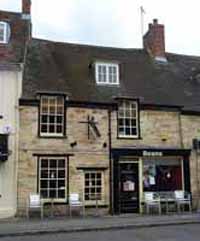 Numbers 24 & 25 Market Place have been combined for many years and run as a bakery. Sarah Robinson ran it in 1841 with John Aspray as a Baker’s Journeyman. Presumably he eventually took over, for a William James Aspray advertised as Baker and Corndealer there in the 1880’s and 1890’s. William Jas Asprey is listed as a baker in the 1891 Census.

In the 1910 Inland Revenue Survey, A Gudgin is recorded as the owner and Samuel Hill as the tenant. Henry Farrell is listed as a baker and confectioner in the 1911 Census. Henry Shard occupied the property in 1920 and the Olney Co-operative Society in 1924. 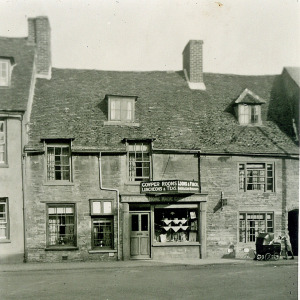 By 1931 Mrs Emily Looms ran her tea rooms there. Her husband, Walter, and Ted Finch were the bakers. The narrow entry through to East Street is still known as ‘Looms’ Entry’.

In the 1936 and 1951 Registers of Electors, Percival Peters is listed as living at Number 24/25, in addition to Walter and Emily Florence Looms.

The photograph on the right was kindly provided (via email to the ODHS website) by an ex-serviceman who was based at Cranfield during WW2, who fondly remembered the cakes and pastries available at Looms’ Tea Shop in the 1940s. 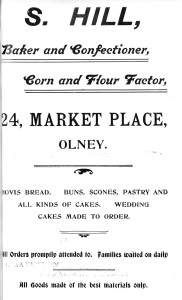