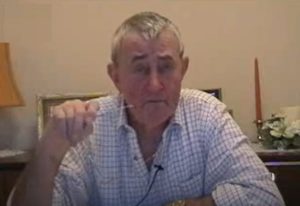 The Transcript
At the end of the War in Europe on VE Day we needed to find a way of celebrating the occasion, along with the rest of the country. It was local knowledge among us lads (I was a 15 year old at the time), that there was an ammunition dump containing thunder-flashes near the Alcove at Weston Underwood. Thunder-flashes were used for army training purposes and were about the size of a half-litre beer can. We used to ignite them on a Swan Vestas match box. They had a barrel and a fuse about four inches long so they couldn’t be held too long before they exploded. All the lads, I think there would have been about 50 of us, fetched the thunder-flashes from Weston and before long half the town had them. Somebody came up to me and said, “I want some thunder-flashes”, and I said “I’ll sell you some for a tanner”. More of this later.

Later on, we lit a huge bonfire, where the Knoll now is, and of course we set off the thunder-flashes. The local people knew what was going on and we really did have one hell of an evening. It was a big celebration. Outside the pubs, the local publicans filled galvanised baths with beer. These were same ones used for bathing and by the women for the washing. Everyone just went along and, provided you didn’t lose your pot, you could drink as much as you liked. It was a wonderful, wonderful evening, particularly because we’d never been allowed to have a bonfire at night during the war.

The local police soon found out that thunder-flashes had disappeared from the ammunition dump and started their enquiries around the town. They questioned the lad who said that he had bought some from me, so of course I didn’t have a leg to stand on when the police came around to my house. Later we all, at least a dozen of us, had to appear at the Magistrates Court at Newport Pagnell. Stan Goss and Stanley Lord were on the Bench at the time. I was fined five shillings and had a verbal slap on the wrist and told not to be a naughty boy. I was put on probation and bound over for twelve months. I had to pay the fine myself, as my father wouldn’t pay it. For a Court Appearance, every child had to have a parent with them, so there were quite a lot of people queuing outside the Court on that day!

Why not checkout the complete article. It is certainly amusing and is a wonderful light hearted description of ‘how thing were’ as a youngster during and towards the end of WW?