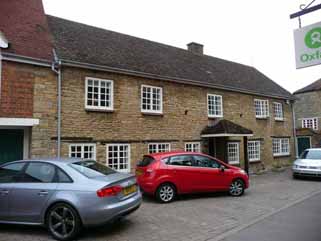 Numbers 2, 3 and 4 Market Place were converted in 2010 to form a single private residence. During the 1980s the three cottages were renovated to form ‘Janey’s Fashions’, a part of ‘Allens of Olney’. In earlier times the cottages and the adjoining forecourt and passageway were known as Eyles Yard. The properties are approached under the archway between Numbers 1 and 5 Market Place, ie: ‘The Flower Shop’ and ‘Allens of Olney’.

The original cottages, being small and not business premises, did not feature in the levies and trade directories of the 19C, but two labourer’s families were living there as recorded in the 1841 Census. Joseph Laybot, his wife Ann and one daughter lived in one cottage and Thomas Edmunds, his wife Sarah and teenage son and daughter lived in another.

In 1888 Thomas and Samuel Partridge lived there and also a John Knight. 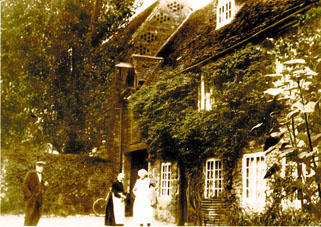 The 1891 Census records that Thomas Partridge, a shoemaker rivetter born 1863 and son of Selina Partridge, still resided there with John Knight a general labourer.

In 1936 the Partridge family were still at Number 4. Listed there were Thomas and Mary Ann Partridge, together with Earnest, Elsie and Albert Partridge. Emma Nichols resided at Number 2. Perhaps Thomas and Mary are included in the photograph on the right?

The 1951 Register of Electors records John Henry Brooks residing at No. 2 and Thomas’s son Ernest Partridge at No. 4 Market Place.