Published in 1925 by Sydenham Henry Augustus Hervey, Vol.18 of the Suffolk Green Book series gives the Subsidies taken in Bedfordshire in 1309 and 1332. A subsidy was the name for any taxation called for by the King in addition to what was usually collected. These had been taken as and when needed – to help pay for the Crusades, other wars or even to pay Royal ransoms!

What had to be paid depended on your wealth.  Tax had to be paid on ‘moveables’ rather than land, so the value of a persons livestock or crops was used, on which a percentage had to be paid as tax.  Usually 1/10th was called for, but sometimes it was as high as 1/4th or as low as 1/40th. 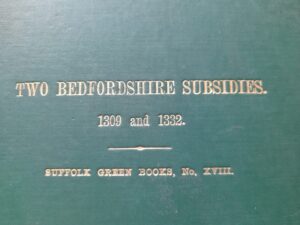 I have extracted the Aspley parts from both lists below.  The first was taken in the third year of the reign of Edward II, when the rate was 1/25th and Bedfordshire collected £687 10s 3½d. in total for the King.

The second here was in the sixth year of the reign of Edward III, when a 1/15th was called for, from which collections from Bedfordshire contributed £615 13s 7¾d.

The names are as given in the original Latin document, the amounts they submitted and then my interpretation of their names.  If anyone has a better grasp of Latin than mine (which wouldn’t be hard…) and can offer a better translation, please let me know! 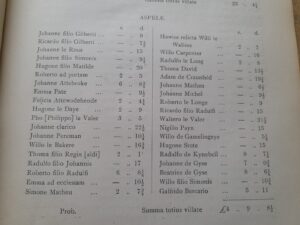 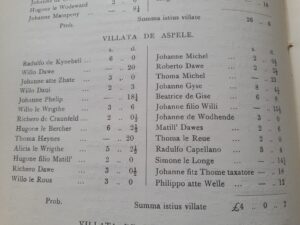 You can see how these small amounts, being replicated across the whole country, soon added up to a significant sum for the King’s coffers.

The most interesting and easily researchable names here are the members of the de Gyse family. The two listed in both schedules above are a mother and son, as an Anselm de Gyse had married Beatrice de Crioll.  That Anslem had died in c.1295, having had a son, John.

The original de Gyse family had come to England from France with William the Conqueror in 1066.  According to the Gloucestershire Archives description of the family, the village of Aspley was owned by John de Burgh (son of Hubert, Earl of Kent) before 1267, he then subinfeudated [leased] it to Anselm de Gyse in that year. At the same time, de Burgh also transferred some lands in Elmore, Gloucestershire, to de Gyse.

There then followed at least eight generations of de Gyse who were involved with Aspley; five of which were named John, two were named Anselm and a Reginald. The de Gyse family added their own name to the little village in Bedfordshire (originally named after a clearing in the Aspen trees) in about 1375 and thus it became ‘Aspley Guise’. 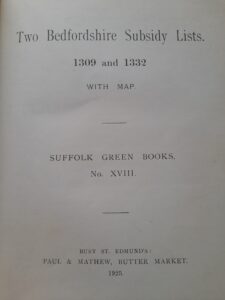 After 300 years, it seems they decided to concentrate on their properties in Gloucestershire instead of Bedfordshire, as Anselme Gyes exchanged several properties with the Crown in December 1539, amongst which he gave up Aspley and received the manor of Brockworth in Gloucester instead. St Botolph’s Church, which dates from at least 1273, has a brass commemorating the Sir John de Guise who died in 1501.

The de Gyse family has continued, although the ‘de’ stopped being used in the late 1300s. One was knighted in 1619 and even though the Baronetcy they held became extinct in March 1783, it was revived the same year in a younger branch of the family. They have been M.P.’s and military Generals. Currently, Sir (Christopher) James Guise is the 8th Baronet of Highnam.