Of all my pub research pages, this is going to be the shortest, as so little is known about this roadside rural public house – it closed down more than 200 years ago.

It stood in Lower End, Wavendon, the last house (at that time) of a small group on the west of the roadside before it continues towards Salford from Wavendon. It can just be made out here on the 1880 OS map (published in 1885) as the house on the left of the road where “S.Shed” is written, near the top-right corner. 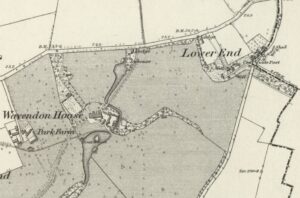 The dashed-line down the right-hand side of the map is the county boundary, which runs along the outside of those houses, meaning the road and field opposite are in Bedfordshire. The building is still there as no.4 Cranfield Road, Lower End.

It does not seem to have formed part of the Wavendon House Estate which is nearby to the west, falling just outside the area it controlled, although the houses in Lower End were undoubtedly for workers on the farms nearby.  Perhaps the inn also got trade from travellers who were avoiding the tolls on the main turnpiked road through Woburn Sands to Newport Pagnell.

Buckinghamshire Archives holds the Alehouse Register for the county, taken from 1753 onwards. In it, the first year’s entry gives a White Horse (or House, it’s very hard to read…) public house in Wavendon, being run by a John Cook.  The same appears for the next three years before the handwriting becoming clearer and very definitely “White Horse” in 1757.  The landlords’ names are recorded but no inn-signs listed between 1758 to 1772, so John’s name continues as a landlord in Wavendon during that time. In 1773, when the inn-sign names restart, John Cook appears against a house called the Black Horse, which continues to 1777 (apart from 1775 when a Register was not taken). In 1778, a William Cook is recorded, before it switches back to John Cook the next year.  No entry appears for 1780, then a Thomas Cook at the Black Horse is listed from 1781 to 1802.  Mary Cook (widow) appears from 1803 to 1810, which is the last entry for a Black Horse in Wavendon in the Register which continues on.  The Black Horse appears to have closed at that point.

There are some details about the Cooks of Wavendon in local Parish Registers, in which the family name appears back to 1658. They record a burial on 3rd April 1780 of a “John Cook, (son of Edmond Cook)”.

Thomas Cooke “Occupation: Victualer” was buried on 15th March 1803. The National Archives at Kew hold a Probate document [IR/26/369] for Thomas Cooke. Notice that there is no mention of children of his own. It reads:

“[Date of the Probate and sum sworn:] 16th September 1803. Under £600. [Name and description of the Testator or Testatrix:] Thomas Cooke Wavendon, Bucks. Victualler.  [Name and place of abode of Testator or Testatrix:] Mary Cooke, his widow and relict, sole Executrix. [Name of the Legatees distinguishing the Residuary Legatee:] The said Mary Cooke for life. [Degree of relationship:] Widow. [Amount of the several Legacies and Annuities and Form of the Bequests particularly of the Residues:] Testator gave his personal estate as follows viz. First I give and bequeath unto my beloved wife Mary Cooke – All my household Goods of kinds and also all my Beast and other cattle of all kinds together with all other property belonging unto me be the same wheresoever and whatsoever during the time of her natural life and after her my said wifes decease my will and desire is that whatever may be remaining at her decease may be equally divided between my sister Mary White and her seven children namely, Thomas White, John White, William White, James White, Mary Eaton, Sarah Cox and Elizabeth Roberts their heirs or assignees for ever. And lastly as to all the residue and remainder of my personal Estate, Goods and Chattels of what kind or nature soever I do give and bequeath the same to my said Wife Mary Cooke. [Report of the Duty:] Blank.” 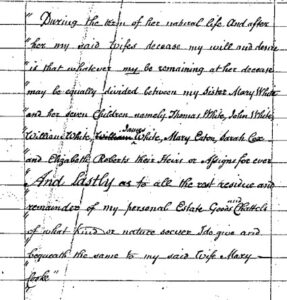 He may have been the same Thomas Cook who was baptised in Wavendon in February 1738, the son of a John and Mary, making him 65.

Widow Mary continued running the inn for another eight years. Then comes a burial for a Mary Cook in 1811: 18th April 1811 – “Mary Cooke, Widow”.  There is another for a “Widow Mary Cooke” on 16th December the same year, but she was noted as being the “wife of John Cooke, labourer”.

It would seem when Mary died, she had had no surviving children and no-one else in the Cook or White families who wanted to take on the public house.

This later notification of the sale of the building, from the Northampton Mercury of 18th December 1813, is the only mention of it I can find in the archived newspapers currently online.  By this time, it was being lived in by either Joseph Giles or Mary Beardmore: 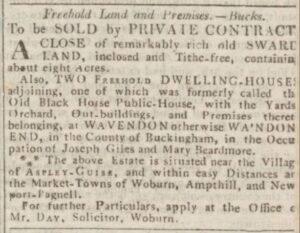 There were still 19 Cook family members in Wavendon by the time of the 1841 census.

I would not have known where this inn had stood, but thankfully 200 years of owners/residents have kept the house name the same and “Black Horse Cottage” is still on the sign of the house in Lower End. 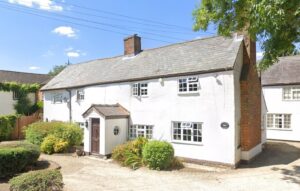