British Elections in the past were very different from today.  The ballots were not secret; in fact, books were published after the events that listed each voter in a parish, within its historic Hundred area and who they had voted for.

Therefore, there is a book listing the “Names and Persons, Together with the Places of their Freehold and Abode, Who Voted For Knights of the Shire For the County of Bucks At the last Election held at Aylesbury, April the Fourth and Fifth, 1722” issued by Daniel Baker, Esq; the High-Sheriff of Bucks. At that time, only male land owners could vote, so the book gives us the names of all the land owners in Wavendon and Walton parishes. 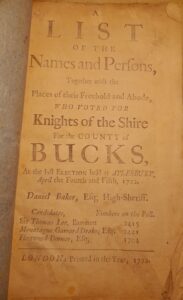 The 1722 British General Election elected members to serve in the House of Commons of the 6th Parliament of Great Britain. This was the fifth such election since the merger of the Parliament of England and the Parliament of Scotland in 1707. Thanks to the Septennial Act of 1715, which swept away the maximum three-year life of a parliament created by the Meeting of Parliament Act 1694, it followed some seven years after the previous election of 1715.

The election was fiercely fought, with contests taking place in more than half of the constituencies, which was unusual for the time. Despite the level of public involvement, however, with the Whigs having consolidated their control over virtually every branch of government, Walpole’s party commanded almost a monopoly of electoral patronage, and was therefore able to increase its majority in Parliament even as its popular support fell.

In the midst of the election, word came from France of a Jacobite plot aimed at an imminent coup d’état. Led by Francis Atterbury, Bishop of Rochester, Lord North and Grey, and other Tory opponents of Walpole, this was later known as the “Atterbury Plot”.

Previously election results had broadly reflected the opinion of at least the minority of adult males who had the vote, although the system had always been subject to the influence of corruption and patronage. However, now that one-party government had been established, those influences could be used systematically to ensure the governing party’s victory. This election set the pattern for much of the rest of the eighteenth century; as partisan feeling began to decline during the years of the Whig oligarchy, the rigging of elections became ever easier, so that British governments could almost always guarantee victory.

Sir Thomas Lee, 3rd Baronet, of Hartwell, near Aylesbury, Buckinghamshire, was the eldest son of Sir Thomas Lee, 2nd Baronet, MP and the brother of George, John and William. He succeeded his father in 1702, inheriting the family seat at Hartwell. He had been returned unopposed as Member of Parliament for Chipping Wycombe at the 1710 general election and also unopposed again for Wycombe in 1713 and 1715.  He had married in 1720 to Elizabeth Sandys, the daughter and heiress of Thomas Sandys of London and had two sons and a daughter.

Mountague Garrard Drake, Esq. was the only surviving son of Montagu Drake MP of Shardeloes, near Amersham, and his wife Jane Garrard, daughter of Sir John Garrard, 3rd Baronet. His father died in 1698 and he succeeded to the estates. He was educated privately under Philip Ayres and matriculated at St John’s College, Oxford in July 1706, aged 15 and was awarded MA in July 1709. From 1710 to 1712, he undertook the Grand Tour visiting Netherlands, Italy, Switzerland and France between 1710 and 1712 studying at Padua in 1710. Drake was returned unopposed as Member of Parliament for Amersham at the 1713 British General Election as soon as he came of age. He was re-elected in 1715 and in 1722, but in 1722 decided to sit for Buckinghamshire instead.

Fleetwood Dormer, Esq. was the third son of John Dormer of Lee Grange at Quainton.  Born 1657, he was educated at Trinity, Oxford and Lincolns Inn. He had been appointed recorder of Wycombe in August 1695 and quickly cultivated an interest in the borough. He was an active JP between 1693 and 1711. His earliest political activity seems to have been in support of the Whig interest at Aylesbury in 1691 and his chance of a seat in Parliament came at the Wycombe by-election of March 1696 but was then defeated at Wycombe in 1698. He is variously recorded as a “Whig” or “Churchman” in analysis of his voting etc. He represented Wycombe in the next four Parliaments and stood for Wycombe in 1710, but withdrew before the vote. In October 1714 he suffered a serious accident on his way from Wycombe to London, being thrown from his horse and breaking a leg. He resigned his recordership of Wycombe in March 1718 and his mastership three years later.

[N.B. Any voter who owned land in a parish, but did not live there, had their parish of residence listed after their name.  Voters could vote for one or two candidates.] 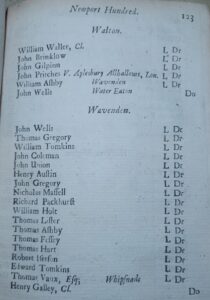 Every single voter in Walton and Wavendon parish cast their votes for both Sir Lee and Drake, apart from the two clergymen, who both voted for Dormer!

Sir Lee and Drake were therefore elected to the two seats to represent Buckinghamshire.  Neither Sir Lee or Drake had declared for specific Whig or Tory interests.

Bedfordshire Candidates
The county of Bedfordshire also needed to elect two Members of Parliament from three candidates. These were:

Charles Leigh was baptised in March 1686, the son of Thomas Leigh, 2nd Baron Leigh of Stoneleigh Abbey, Warwickshire. He was admitted at Inner Temple in 1701 and matriculated at Balliol College, Oxford in May 1702, aged 16. In 1704, he succeeded his uncle Hon. Charles Leigh and inherited the Leighton Buzzard estates in Bedfordshire. He stood at a by-election at Warwick on 13 December 1710 against the Greville interest. He was elected Member of Parliament in a contest and was classed as a Tory and named as a ‘worthy patriot’ who helped expose the mismanagements of the previous Whig government. He offended some Tories for abstaining on 24 January 1712 when the House voted on the motion censuring the Duke of Marlborough for his ‘unwarrantable and illegal’ acceptance of money from bread contractors. Having been a Tory who might often vote Whig, Leigh became a strong opponent of Walpole’s administration and from 1715, voted against the Government in all recorded divisions. At the 1722 general election, he stood in Bedfordshire.

Sir Roland Alston, 4th Baronet, was baptised in September 1679, the fourth son of Sir Rowland Alston, 2nd Baronet. He succeeded to the baronetcy on the death of his elder brother Sir Thomas Alston, in December 1714. By 1719, he married Elizabeth Raynes, daughter of Captain Thomas Raynes.  He stood as a Whig candidate in the 1722 Bedfordshire election.

William Hillersden was baptised April 1676, son of Thomas Hillersden, M.P., of Elstow, was educated at Wadham, Oxford and Inner Temple. He had married by 1705, to Elizabeth, daughter of William Farrer of Biddenham, Beds. He held the office of Sheriff for Bedfordshire in 1700-2. Hillersden, whose father had represented Bedford in three Parliaments under William III, was descended from Sir Thomas Hillersden, who bought the site of Elstow Abbey in 1616. He was returned for the county in 1715, whereafter he voted with the Administration in all recorded divisions, receiving the whip through his father-in-law, the chairman of ways and means.

As Collett-White writes in his book:
For the County, Charles Leigh was opposed by two Whigs, Sir Roland Alston and William Hillersden.  Leigh did well in his home area of Manshead hundred [of which Aspley Guise is part]. He went further ahead in Redbornestoke in central Bedfordshire, where the Whigs were behind in 1715. He kept Tory dominance in Biggleswade in the Harveys home area. He also closed the gap on the Whigs in the town of Bedford. Alston’s overwhelming vote in the two northern hundreds of Willey and Stodden, near to his seat of Odell Castle, ensured him second place. Alston and Hillersden polled roughly the same number of votes in Barford Hundred. Hillersden was just ahead in the hundreds of Clifton, Wixamtree and Flitt, but this was not enough to get him in. He lacked the strong support near his home that his opponents had.

Nationally, the Parliamentary seats were spilt with Whig having 69.7% and the Tories 30.3%. Robert Walpole formed a Whig Government with Tory Sir William Wyndham in opposition.

Drake voted against the Administration in all recorded divisions. However, at the 1727 British General Election, it was said that the populace were mutinous and so exasperated with the great Mr. Drake, whom they considered the chief promoter of the compromise and against the rights of the freeholders, that he decided to return to Amersham where he was elected in 1727.

The unelected Dormer died the year after the election and was buried at Quainton in October 1723.

Alston died aged 80 at St Marylebone, Middlesex on 2 January 1759 and was buried at Odell. He left two sons and five daughters and was succeeded in the baronetcy by his sons Thomas and then Rowland.

In 1725, Leigh voted against the restoration of Bolingbroke’s estates with four other Tories. He did not stand at the 1727 general election, but was returned for Bedfordshire at a by-election on 16 February 1733. He voted against the Administration on the Excise Bill in 1733, and the repeal of the Septennial Act, in 1734. He was defeated at the 1734 general election and not stand again. He died without issue on 28 July 1749.