Some of the best sources for local or family history research are the old newspapers for our district.

There were several county-wide and town papers such as The Bucks Standard, The North Bucks Times, Wolverton Express and the Bedfordshire Times, with their regular columns on local news, but these columns seem to start and stop; the correspondents either getting bored or possibly switching allegiance to another paper. Bedfordshire and Buckinghamshire Library Services have many of these on microfilm. However, Woburn Sands has had its own dedicated papers in the past too.

Woburn Sands Weekly Messenger was far smaller local paper. This was produced by Mr Herbert Gregory at his ‘Sandpine’ (sometimes “Sanpine”) Printing Press, in the High Street, which was also responsible for many of the local postcards. He very helpfully printed a checklist of his postcards in one edition. In June 1906, he is advertising Cheetham’s postcards of “The Fire”, (when The Cyclists Rest burnt down,) at 2d each, but by April 1907, he is clearing his own postcard stock, and offering 6 for 1d.

Herbert’s newspaper had an edition number, and by working backwards from the only copy I have seen (issue 7), it would seem to have started on 17th June, 1905. But the Messenger did not last, as Gregory soon changed the title to The Woburn Sands Echo and District News. The earliest copy I have seen of that, (issue 28) is from 21st April, 1906, meaning it probably began on 14th October, 1905. Both of these papers are a single folded sheet of local adverts, (several of which are for other services provided by Gregory himself…) some local sports results and wedding reports etc. The Messenger has been used for an article in the book “Folk Characters and Events in the History of Bedfordshire and Northamptonshire” by Vivienne Evans, 1989. 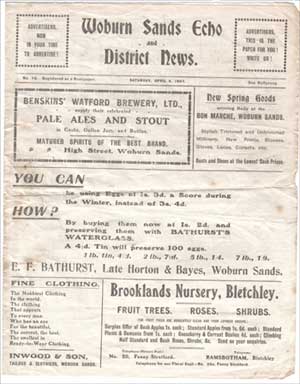 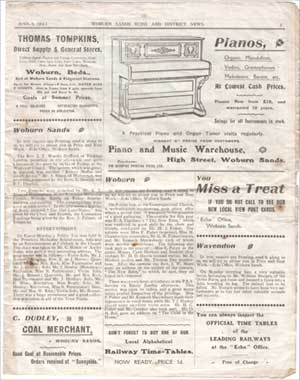 The editions I have seen copies of are:

Herbert Gregory also supplemented his printing business with selling pianos, organs, violins and gramophones. He appears in local trade directories only for the year 1908, but there is a Henry Gregory, stationer, (perhaps a typo?) listed in 1906.

The Woburn Sands, Aspley Guise and District Advertiser ran from 25th November 1909 to 29th June 1911. Copies of these are lodged at the British Library.

If you find any other editions of these papers, please let me know.

The British Library are slowly making their newspaper collection available online, and OCR’d, so specific keywords can be searched for.  None of the papers listed above have been digitised yet, but many wider Buckinghamshire and Bedfordshire titles are now available at British Newspaper Archives. You will find the earliest mentions of this area in the Northamptonshire Mercury from 1770.