1909 Pageant of the Year, Aspley Heath

I had these two postcards for many years. They were produced by Robert Cheetham of Woburn Sands.  Finally, I found the story of the event in the Ampthill & District News of 3rd July 1909. 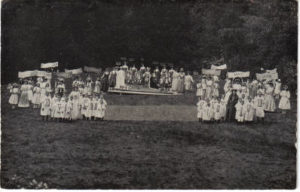 A Pageant of the Year.  DELIGHTFUL PERFORMANCE AT WOBURN SANDS.

On Wednesday afternoon, at The Knoll, Woburn Sands, the beautifully situated residence and school of the Rev. E. F. Miller, a Garden Fete, a Pastoral Pageant, and a concert, were held on behalf of the Church of England Incorporated Society for providing Homes for Waifs and Strays; and Lady June, who has played us such a bitter jest this year, unbent in the cause of sweet charity and gave of her most radiant sun-shine. Before the pageant began, many visitors took a short ramble in the surrounding woods to inhale their tonic fragrance. No lovelier nor more appropriate mis-en-scene for the pageant could have been chosen. A natural arena of springy turf, meet for Titania’s revels, enclosed by a semi-circle of dark, solemn firs, freshly tipped with bright emerald, lay beneath a little cove, in front of, but on a lower level than the house, and rhododendrons flamed across the bottom of the slope. The spectators basked in the genial rays of the sun, rejoiced in the fresh breath of the summer breeze and the Sèvres blue of the sky, and thus ensconced in warmth and comfort, could enter into the joyous spirit of the scene. At the appointed hour a concealed band struck up a sonorous march, and a gay and glittering procession wound its way from the woodland glades. First, Father Time, garbed in the proverbial brown sackcloth, and carrying his gleaming scythe, stood at the side the dais in the centre of the sward, and after him came the two stately Queens of Day, and Night. Day with golden locks, and attired in vestal white and gold, and Night raven-tressed and in trailing draperies of black, emblazoned with the crescent moon and stars – each leading her hours, consisting of twelve little boys, graduated as to height. They wore skull caps, red for day and black for night, and surplice-like garments, the breast of each embroidered with his Roman numeral. Then entered the Months, symbolized as is fitting by dainty maidens wearing fabrics of exquisite hues, and walking between two smaller girls in white frocks, ribbons, and Dutch bonnets, who bore aloft a banner with the “Month’s” name. Thus “February” wore the white of the snowdrop, “March” the peculiar mauve of the crocus, “April” the daffodil’s gold, “June” the warm pink of many summer flowers, “July” deep cornflower blue, “August” the vivid scarlet of the poppy, etc. Next the Four Seasons, in pale green, cerise. old gold, and white, all most winsome and graceful, and each attended by her herald in eighteenth century court costume. Finally, more heralds in yellow, white, and green; the King, gorgeous in crimson and ermine, crowned and bearing the orb and sceptre, and behind him a retinue of twelve merry little pages in yellow. Description fails to convey the charm of this brave array, a riot of delicate colour and brightness, as it clustered round the King on his throne. 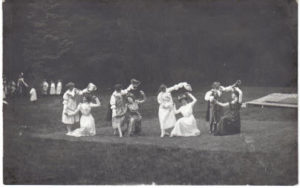 The festivities were opened by the Hours in a quaint march, which someone likened to winding up a clock. “Night” and “Day” danced a dreamy waltz-like measure, after which there was a delightful old-world minuet by the “Seasons,” and the “Heralds” which was encored. A spirited Morris dance was next performed by four of the “Months” little maids of honour. The “Months” themselves won enthusiastic applause for their dainty tripping in a wreath dance, and then their attendant sprites charmed the onlookers with a picturesque country dance. All these clever young people danced with elegance and finish. The singing – “Songs of the Seasons,” and a chorus, “Now let the welkin ring” – was no less sweet and bright. A triumphal march past ended the fascinating spectacle, so full of youth and beauty and the joy of life, and the performers then mixed with mortals proceeding towards the tea tent on the lawn. Nothing quite like this “Pageant of the Year” has ever been seen in Bedford, and it is pity it cannot be reproduced in the county town. Of course, such a charming natural setting as the heart of the Aspley Woods would be difficult to obtain, unless Castle Close were requisitioned. Great praise for their artistic organisation is due to Mrs. Holmes, Mrs. Everest, Miss Mahon, and Miss G. Holmes, the promoters. Miss Freckner was responsible for the dances and the accompaniments were rendered by Mr. H. Giles and band. The King was taken right regally by Miss M. Ward, and Miss Mahon’s simulation of Time was well conceived. “Night” was represented by Miss Sheila Robinson, and “Day” by Miss Nancy Carswell. The Seasons were cast as follows:- Spring, Miss Barbara Everest; Summer, Miss D. Yarborough; Autumn, Mrs. Stella Hebard; Winter, Miss Evelyn Salmon. The Misses M. Tanqueray, K. Maltby. L. Green, and Hilda Foyster were the Heralds. In all there were 89 performers. The pageant was repeated in the evening. At the concert in the gymnasium after tea, Miss Olive Bell played the violin brilliantly, Miss Bailey and Miss Barbara Everest sang some charming songs, and Miss Hart gave three recitations in talented style. There was also melodious part-sing by the Revs. F. F. Hort and P. H. R. Hunter, and Messrs. Gethen and Travers.

The Fete was held again on Thursday, when the following artistes were announced to appear at the concert: Mons. A. De Reyghere (violin), Mr. S. W. Churchill (piano and baritone), and Mr. W. Steff Langston (cello).