When the informal arrangement at Sandymount came to an end, a new organisation was formed, “The Woburn Sands Recreational Club”. Records date from 1899, when the Trustees were the Vicar, Mrs Pole Stuart, Canon Bartlet of Daneswood (St. Michael’s curate), President was also Canon Bartlet, Chairman was the Vicar, with James McMurtrie (the furniture dealer) as Secretary, and A. G. Ellingham (the hairdresser) as Treasurer.

At this time, the club rented a room from Charles Inwood (adjoining what is now Club Cottages) and was part of an old pub, the Red Lion Inn. By 1900, there were 40 members and these premises had become too small, so a meeting was held and it was agreed to rent a room from Frederick Down in Russell Street. This was the half-timbered building that was later used as a bakery. At the same time, the name changed to “Woburn Sands Men’s Club”. The Mayor of Bedford came to officially open the new clubhouse.

The fortunes of the club (and their bank balance) rose and fell over the years and although most of the members went away to fight in World War One, the Royal Engineers, who were stationed in Woburn Sands, made good use of the club. The clubhouse ownership had now passed to William Needham and he made an arrangement to reduce the rent to help keep the club afloat.

By 1920, there was enough support for the Club to have control of their own premises and after several options were looked at, the land to the rear of the High Street was purchased. This was a large financial investment and in order to recoup some of the outlay, fundraising events were held, including a Bazaar in November, when this recipe book was compiled by locals.

It would have been a good idea, as everyone who had submitted a recipe would want to buy a copy! Several of the recipes came from addresses in Canada, which I presumed had come from the girls who married some of the Canadian soldiers who were stationed here in World War One, but Paul Ferguson, curator of the Chilliwack Museum, has attempted to identify the individuals listed in the book from Chilliwack, Canada, and none of them appear to have a direct connection to Woburn Sands. He commented:

“Mrs. H.C. Fox Mabel Maud Fox (maiden name Revis), wife of Herbert Charles Fox. Born Bedfordshire, England, came to Canada in 1911. Married to Herbert Charles Fox who was born in Dorset, England. For a number of years they lived at Rickmansworth, Hertfordshire. Mr. Fox operated a men’s furnishing business in Chilliwack, but first worked for Ashwell’s Ltd. He later went into business with his son-in-law B.G. Spencer. (Connection to your listed Mrs. Spencer not established).

Mrs. Percy Burton was Katherine Anna Burton (maiden name Denmark and given name sometimes recorded as Kathleen) was the wife of Percy Burton. Born in 1869 at Cambelford, Northumberland County, Ontario, Canada. Married in 1905. The Burtons had a hardware business in Chilliwack “Denmark and Burton”. Mr. Burton was a native of Oxford, England.

Mrs. Spencer; I speculates that this was Emma Ethel Spencer (maiden name Thilde). She was the wife of Thomas Spencer. Mrs. Spencer was born in Havelock, Ontario, Canada. She was married to Thomas Spencer who was born at Silver Hill, Ontario. No details of occupation provided in obituaries.

Mrs. G.H.W. Ashwell: Mary Pauline Ashwell (maiden name Marsden) was married to George Horatio W. Ashwell. The Ashwells were leading business people in Chilliwack and Mary Ashwell prominent during the First World War as President of the Chilliwack Patriotic Society, until it was replaced by the Imperial Order Daughters of the Empire. She remained with the new organization in a leading role and became the first regent of the IODE when it was organized in 1916. She remained in this position for five years and for two years became the organizaing secretary. She was instrumental in the formation of several local chapters of the IODE; additionally she was a charter member of the Chilliwack Municipal Chapter and a life member of the national chapter. Due to her connections many members of these societies were comprised of the leading women of Chilliwack, many of whom were married to local businessmen.”

There are links below to the recipes themselves so you can try them out! [N.B. Some of the recipes feature raw eggs which can be dangerous to consume.] 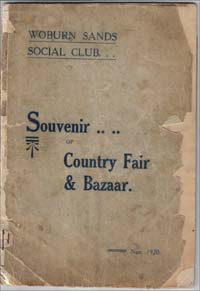 Many of the recipes in the book sound very mouth-watering and I particularly like the sound of “Woburn Sands Pudding”, a suet pastry spread with golden syrup and currants, then boiled for two hours.

Dishes and their Owners, from the 1920 Woburn Sands Social Club Recipe Book