The Local Postcards of Herbert Gregory, of Woburn Sands

The first local trade directory entry for Herbert Gregory is in 1908, but there is a Henry Gregory, listed as stationer, (perhaps a printing error?) in 1906.

Gregory had his own print works, “The Sandpine Printing Press”, for his stationery, and supplemented his printing business by selling pianos, organs, violins and gramophones. The name Sandpine seems to fluctuate, and is sometimes Sanpine instead. 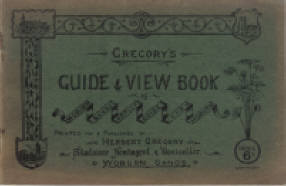 which dates from about 1904. In July 1952, exact copies of this book were produced and sold at an exhibition about Woburn Sands history, which was held at a fete in the Vicarage gardens. There is no indication in these later reprints that they are copies, so it is difficult to tell the originals from the reprints.

Gregory is also responsible for giving the village its first dedicated newspapers, with “The Woburn Sands Messenger” in 1905, and “The Woburn Sands Echo” in 1906. An edition of the Echo in April 1906 lists 31 of his local postcard views, but later cards did not have any index numbers. He also produced some in conjunction with Valentines, a national postcard company. I have managed to collect most of the numbered series, and many other un-numbered Gregory cards, and these are displayed below.

Whatever materials and process was used in the production of these cards, the images are quite brittle and are often chipped at the edges, which spoils some. They have usually been hand-tinted, and occasionally some liberties have been taken with the colours, compared to the original buildings! 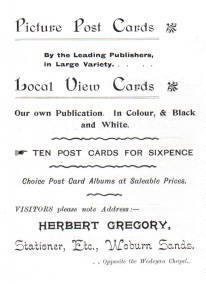 The various styles of backs of postcards that Gregory produced. They are usually nice tinted cards, but there appears to be some crossover with the cards issued by Robert Cheetham. Perhaps Gregory bought the images wholesale from Cheetham, then issued them under his own name.

Here are the Sandpine cards I have found:

This ends the numbered cards I have, but there are plenty more from Gregory that are not in the numbered series….

If you have any Gregory – Sandpine cards that I can add to the display here, I would be pleased to hear from you.