Francis worked at Newton Longville brickyard before the war, and was called up in 1939.

The 5th Beds had various training and guard duties in England, including Litchfield and Atherstone Park, before leaving Liverpool on the SS Reina Del Pacifico on 27th October 1941. This went to Halifax, Nova Scotia, where they transferred to American liners, and went eastwards to Cape Town, then on to Bombay, where they stopped for two months.

About 1000 Beds and Herts Regt. men had sailed from Liverpool. They arrived in Singapore just a week before the surrender. About 60 died before the fall of Singapore, and 940 into captivity, where 326 died in Prisoner of War camps and working on the Burma Railway.

His parents, Frank and Elizabeth, received a delayed postcard from him in August 1945, and believed he was still alive.

Woburn Reporter 26th June, 1945: “Mr and Mrs F. Hollier had been officially notified that Francis Edward (Peter) Hollier died 19th October 1943 in Thailand.  He joined up in 1939, and went to Singapore in Oct 1941. Missing since March 1942.  Another son William, who was with his brother, is still missing.”

William had been with his brother in the camp, but the were separated, as William worked in the hospital kitchen. He contracted typhiod, and was delirious in the camp hospital when his brother visiited him for the last time before he was sent up country to where the railway was being built. William never saw him again. Someone in the camp made William a memorial plaque for his brother, which he still has. At the end of the War, when the camps were liberated, despite his own ill health, William opted to sail home with his comrades rather than be flown home. 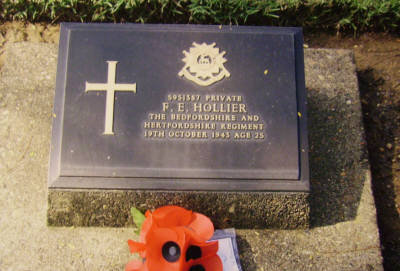 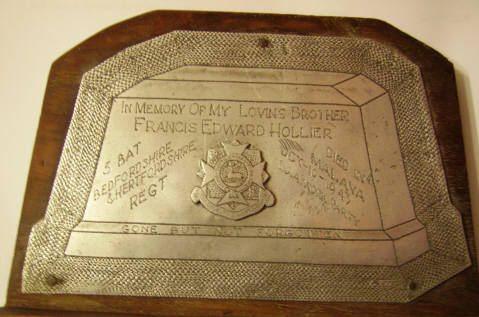 Original casualty lists at Bedfordshire and Luton Archives and Records Service say that Francis died of Pellagra Ulcers.  He had given next of kin as living at 15 Russell Street.

Commonwealth War Graves Commission: “Chungkai was one of the base camps on the railway and contained a hospital and church built by Allied prisoners of war. The war cemetery is the original burial ground started by the prisoners themselves, and the burials are mostly of men who died at the hospital. There are now 1,427 Commonwealth and 314 Dutch burials of the Second World War in this cemetery. The notorious Burma-Siam railway, built by Commonwealth, Dutch and American prisoners of war, was a Japanese project driven by the need for improved communications to support the large Japanese army in Burma. During its construction, approximately 13,000 prisoners of war died and were buried along the railway. An estimated 80,000 to 100,000 civilians also died in the course of the project, chiefly forced labour brought from Malaya and the Dutch East Indies or conscripted in Siam (Thailand) and Burma (Myanmar). Two labour forces, one based in Siam and the other in Burma, worked from opposite ends of the line towards the centre. The Japanese aimed at completing the railway in 14 months and work began in October 1942. The line, 424 kilometres long, was completed by December 1943. The graves of those who died during the construction and maintenance of the Burma-Siam railway (except for the Americans, whose remains were repatriated) were transferred from camp burial grounds and isolated sites along the railway into three cemeteries at Chungkai and Kanchanaburi in Thailand and Thanbyuzayat in Myanmar.”

My thanks to Mr. William Hollier for assisting with the details and the photographs for this page, .