The Woburn section of Slaters Trade Directory of 1852:

Woburn is a parish in the hundred of Manshead – the market town, handsome and respectable, is 42 miles NW by N from London, 14 SW by S from Bedford, 6 N from Leighton Buzzard, and 24 SE from Northampton; situated near the Bedford and Bletchley branch of the London and North western Railway.  This place, spelled by Leland, in his Itinerary, Owburn, was, in the year 1724, nearly destroyed by fire; but this circumstance, though distressing to individuals ultimately proved generally beneficial, as the houses wеrе soon after rebuilt in a more regular and tasteful style. The market house, which stands in the centre of the town, was much improved by Francis Duke of Bedford. The head of the house of Russell is lord of the manor, and as such holds courts annually, or oftener as occasion may require; and the magistrates assemble here every fortnight, in petty session, upon business connected with the hundred. The manufactures of Woburn are lace and straw plait; an extensive trade is also carried on in corn and timber; there are besides several maltings and in the immediate neighbourhood are consider able pits of that useful article, fullers’ earth.

The parish church of Saint Mary is a neat, convenient and handsome structure, while its ivy-clothed walls present a venerable appearance: the tower, which formerly stood detached from the main building, is now united to it, and the Duke of Bedford has surmounted it with a beautiful spire, and furnished the altar with a fine painting of the nativity: the living is a perpetual curacy, the Duke being patron and impropriator. The church contains a curious monument to the Stanton family, consisting of twelve figures in the attitude of prayer, besides several other ancient sepulchral memorials. The other establishments of religious worship, instruction and benevolence, are chapels for lndependents, Baptists and Wesleyan Methodists, a British school and twelve almshouses for poor persons; these charitable institutions are mainly supported by the munificence of the munificence before mentioned.

The chief object of attraction, in the vicinity of the town, is Woburn Abbey and Park, the superb seat of the noble family of Russell: it occupies the site of a Cistercian Abbey, founded in 1145 by Hugh de Bolbeck, the revenue of which, at the dissolution, was valued at upwards of £400.; the site, with a great portion of the lands, was granted by Edward VI, in 1574, to Lord John Russell. The park comes close to the town, and being generously open to the public, affords to the inhabitants delightful walks, amidst scenery remarkably beautiful and diversified. Woburn House was almost wholly rebuilt by Flitcroft, for John Duke of Bedford, about the middle of the last century. This extensive and magnificent building, situate in the midst of a fine park, occupies four sides of a quadrangle: the west front is of the Ionic order, with an insulated basement; the principal floor, or suite of rooms on this side, consists of a saloon, state bed room, and drawing and dining moms; the south comprises the library, breakfast and Duke’s rooms; the east, the vestibule, servants’ offices. &c.; the north includes the Queen’s, Prince Albert ‘s rooms, and various other chambers. The gallery exhibits a large and most interesting collection of portraits, whilst numerous other valuable paintings are dispersed in other rooms. In the sculpture gallery is the beautiful antique vase brought to this country by Lord Cawdor; and an ancient sarcophagus of marble, conveyed hither from Ephesus; the group of the grace, by Canova, &c. This mansion has received many improvements and undergone considerable alterations, particularly under Francis Duke of Bedford ; the additional buildings were designed and executed by Mr. Holland. The park is about twelve miles in circumference, surrounded by a wall; it comprises a pleasing variety of hill and dale, and is enriched with peculiarly fine woods of majestic oaks. Winding through the woods the visitor arrives at ‘the Duchess’ Shrubbery,’ beautifully laid out in the modern taste; leaving which, and riding over the hill, which commands an enchanting and comprehensive prospect, he comes to the evergreen plantation, of about two hundred acres – a charming ride on a fine dry soil, through avenues of all varieties of evergreens, of luxuriant growth so that the equestrian is sheltered, in the depth of winter, by a continuous canopy of verdure.

Queen Elizabeth made a journey to this seat in 1572; and when Charles I visited Woburn in 1645, he reposed at the Abbey. The public day for viewing the Abbey is Friday, from eleven till four, between Lady-day and Michaelmas, and from eleven till three between Michaelmas and Lady-day. The market day at Woburn is Friday. Fairs, January 1st, March 23rd  July 13th and September 25th. The parish of Woburn contained, in 1831,1827 inhabitants, and in 1841, 1914.

Aspley Guise is a parish, in the same hundred as Woburn – the village is pleasantly situated two miles north of that town. Anselm de Guise, in 1267, obtained a charter for a market to be held here on Friday, and a fair at the tide of St. Botolph – both of which hare been discontinued. The parish church of Saint Botolph contains several monuments of antiquity and interest: the living is a rectory, in the gift of the Duke of Bedford. The parish contains 1139 inhabitants.

Husborn Crawley, an adjoining parish to Aspley Guise, contains a village about two and a half miles NE from Woburn . The church of Saint Mary Magdalene occupies an elevated site, and has a lofty tower.  A handsome canopied monument, with the figures of an armed knight and his lady, is in the church: the living is a discharged vicarage, in the presentation of the Duke of Bedford. Population of the parish 656.

Milton Bryant is a small village, about two miles SE from Woburn , situated a little to the north of the road to London . The church is dedicated to Saint Peter: the living is a rectory, in the gift of the Crown. Population, 382.

Ridgmont village and parish is in the hundred of Redbornstoke – the village is about three miles NE from Woburn . In old records it is written Rugemont  i.e. the ‘Red Hill,’ applicable to its situation and the colour of the soil. The church of All Saints has, within these few years, received addition of sittings, at the expense of the society for building and enlarging churches and chapels: the living is a discharged vicarage, united with Segenhoe. There is a place of worship here for Baptists and a National school. The parish contained, in 1841, 964 inhabitants.

POST OFFICE, Bedford Street, Woburn, John Charles Peeling, Post Master. – Letters from London, and various places South, also from Birmingham, Manchester, Liverpool, and the North of England, and from Scotland and Ireland, arrive every morning at six, and afternoon at two, and are despatched at a quarter before ten in the morning, and eight in the evening. Letters from Bedford, Ampthill, Huntingdon, Saint Neots, &c, arrive every morning at eight, and are despatched at six in the morning. 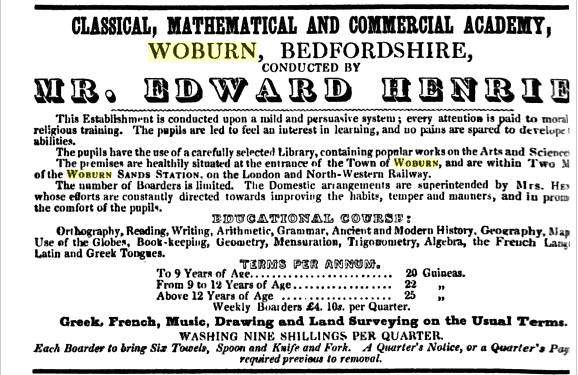 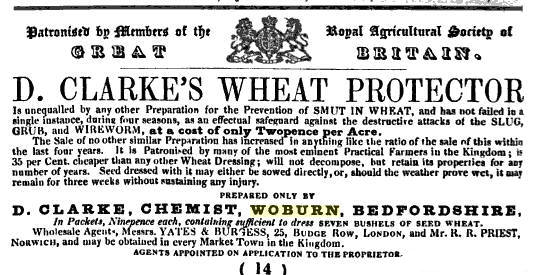 CONVEYANCE BY RAILWAY ON THE BEDFORD AND BLETCHLEY BRANCH OF THE LONDON AT NORTH WESTERN RAILWAY.
Station – about two miles and a half from the town – Thomas Osman, station master
An Omnibus from the Bedford Arms to the station, awaits the arrival and attends the departure of the trains.