Stanley was born in Woburn Sands on 13th March, 1913, to Albert and Florence. His father was the manager of the Benskins Brewery outlet, now the wine shop at the top of Russell Street. A sister, Edna Mary, had been born 1911, and a brother, Albert John, in 1909.  Their father, Albert, died in 1937 aged 63, and was buried at St Michaels.

Stanley joined the merchant navy in 1928, and went on to obtain his Master certificate (No.43649) in 1939, in London. He had previously been 2nd or 3rd mate on the “Beaverbrae”, the “Derrynane” and Master of the “Octare”.

The SS Pass of Balmaha was a triple expansion steamship tanker of 758 tonnes. Built in 1933 by Blythswood Shipbuilding Company, it was operated by the Bulk Oil Shipping Company, but was on War duty, having been chartered to HM Government.

On 22nd June, 1941, the Pass of Balmaha left Alexandria with a cargo of petrol for the besieged Tobruk, escorted by HMS Auckland and the HMAS Parramatta. Two days later they were attacked in rolling attacks by German and Italian bombers, which sank the HMS Auckland and damaged the tanker, which was taken in tow for Tobruk by HMAS Waterhen at dusk, escorted by HMAS Vendetta. Some repairs were made in Tobruk and the tanker returned under escort by the HMAS Parramatta to Alexandria, where they arrived on 30th June. From www.uboat.net

Although damaged, the ship survived to return to service. Just four months later, whilst on a 500km voyage from Alexandria westwards to Tobruk in the Mediterranean, it was attacked at 4am by the German submarine U-97, commanded by Udo Heilmann. It was torpedoed and her cargo of petrol blew up.  This destroyed the ship and killed all those on board; the entire crew of sixteen plus two gunners. It sank very close to Alexandria. (31′ 14″ North, 28′ 50″ East)

Stanley is listed on the Tower Hill Memorial to merchant seamen, and also the Bedford Modern School War Memorial, on Panel 80. 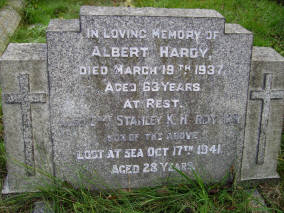 At 00.55 hours on 17 Oct, 1941, U-97 spotted a small convoy, consisting of the Samos and Pass of Balmaha under escort by the British armed trawler HMS Cocker about 50 miles west of Alexandria. A first spread of three torpedoes at 02.17 hours missed, but a second spread of two torpedoes at 03.25 hours hit and sank the Samos. The Pass of Balmaha was sunk with a spread of two torpedoes at 04.00 hours.  It was hit by one torpedo and disappeared in a flaming inferno, a cloud of smoke and flames were seen rising about 300 metres. The master, 15 crew members and two gunners were lost.  From www.uboat.net His memorial stone at St. Michaels

U-97 was itself eventually sunk on 16 June, 1943, in the Mediterranean, west of Haifa, by depth charges from an Australian Hudson aircraft. 27 crewmen died, but there were 21 survivors.

In all, 4,786 merchant ships were lost during the war with a total of 32,000 lives. More than one quarter of this total were lost in home waters. The Second World War extension to Tower Hill Memorial, London, bears almost 24,000 names.