The 5th Beds had various training and guard duties in England, including Litchfield and Atherstone Park, before leaving Liverpool on the SS Reina Del Pacifico on 27th October 1941. This went to Halifax, Nova Scotia, where they transferred to American liners, and went eastwards to Cape Town, then on to Bombay, where they stopped for two months.

About 1000 Beds and Herts Regt. men had sailed from Liverpool. They arrived in Singapore just a week before the surrender. About 60 died before the fall of Singapore, and 940 into captivity, where 326 died in Prisoner of War camps and working on the Burma Railway.

In January 1944 his wife wrote to the Red Cross to make enquiries, and they reported that they had been told he was still OK.

In the Woburn Reporter, 12th June, 1945, Mrs S M White of St Elmore, Newport Road Wavendon has been officially notified that Walter White died of vitaminosisin in Thailand in June 1943.  He was a keen cricketer and footballer.  He joined up 6 weeks after the war started when his daughter, Barbara, was 6 weeks old.  He had been reported missing, then a Prisoner of War, and Mrs White had 3 postcards from him.

In some undated newspaper clipping at Bedfordshire Archives and Records Services, Mrs W. White of St Elmo, Newport Road, Wavendon, received a second postcard, pre-printed, with just 4 words hand written in. “I am interred in No.2 POW Camp, Thailand.  My health is usual.  I am working for pay. Please see that [all at home] is taken care of. My love to you [Wally].

According to original documents at BARS, Walter was of HQ Company, and died of dysentery, in Takanon, one of the camps along the Burma Railway. Walter is listed in the Kanchanaburi War Cemetery, Thailand. 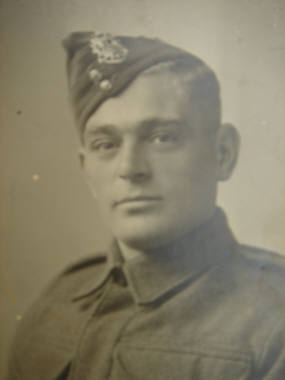 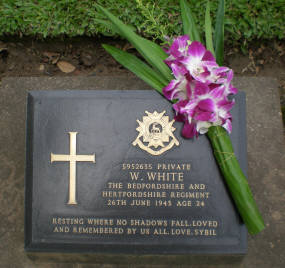 His descendants have discovered that he was transferred from the Sime Road POW camp in Singapore on 17th October to Thailand, transiting through Ban Pong & Kanchanaburi as part of Group 2. Chungkai became Group 2 HQ, however, with the help from Rod Beattie (Thailand to Burma Railway Center) they believe that his working area was in the North Wang Pho to Pukai area. From this point, he was transferred to the 2nd branch in April 1942 to the Takanun region.

He was then buried in the Takanun camp cemetery in Grave number 10. After the War, these graves were located, and reburied in the Kanchanaburi cemetery.

Kanchanaburi War Cemetery is only a short distance from the site of the former ‘Kanburi’, the prisoner of war base camp through which most of the prisoners passed on their way to other camps. It was created by the Army Graves Service who transferred to it all graves along the southern section of railway, from Bangkok to Nieke. There are now 5,084 Commonwealth casualties of the Second World War buried or commemorated in this cemetery.

The notorious Burma-Siam railway, built by Commonwealth, Dutch and American prisoners of war, was a Japanese project driven by the need for improved communications to support the large Japanese army in Burma. During its construction, approximately 13,000 prisoners of war died and were buried along the railway. Two labour forces, one based in Siam and the other in Burma worked from opposite ends of the line towards the centre. The Japanese aimed at completing the railway in 14 months and work began in October 1942. The line, 424 kilometres long, was completed by December 1943. The graves of those who died during the construction and maintenance of the Burma-Siam railway (except for the Americans, whose remains were repatriated) were transferred from camp burial grounds and isolated sites along the railway into three cemeteries at Chungkai and Kanchanaburi in Thailand and Thanbyuzayat in Myanmar. Commonwealth War Graves Commission

My grateful thanks to his family for providing the photos and some of the details here.