Woburn is a neat market town, distant 15 miles from Bedford 42 miles from London, and 24 miles from Woburn Sands station of the London and North Western Railway. The population in 1851 was 2,048, and in 1861, by the recent census, it was 1,764.  The Market House, a very neat building, stands in the centre of the town. The market day is on Friday, and there are fairs on January 1st, Mach 23rd, July 13th, and October 6th.  The pillow lace and straw plait trades find employment to the inhabitants. There are several charities and endowments, nearly the whole of which proceed from the family of the Duke of Bedford. There are 12 almshouses, also schools for boys and girls.  The Church, dedicated to the Virgin Mary, is a fine structure, with a pinnacled tower, surmounted by an octagonal lantern and vane. The living is a donative curacy, in the gift of the Duke of Bedford.  Woburn Abbey is an object of great attraction to the visitors to this neighbourhood. It is a large quadrangular mansion, containing a very fine sculpture gallery, supported by pillars of marble. It also contains a very good collection of paintings by the ancient and modern masters, and a mosaic pavement from Rome. The Abbey is surrounded by a very large park, well stocked with deer. 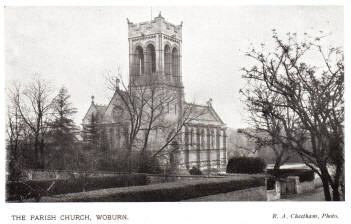 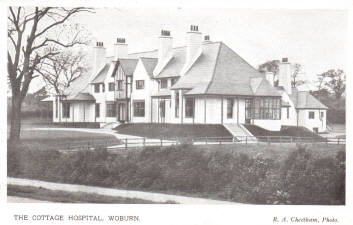 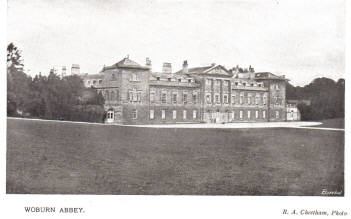