Woburn Sands, formerly known as Hogsty End, when it was a hamlet of Wavendon, is now an ecclesiastical parish, with an area of 341 acres, and in 1901 had a population of 1043, now increased, as Woburn Sands is a growing place – to about 2,000 people or even more – and attractive as a residential locality, owing to its situation, just below a spur of the Chilterns, where salubrity of site and beauty of scenery combine to render retirement agreeable. The assessable value (1907) is £5,641.

In 1907, “that portion of Woburn Sands, lying in the parish of Wavendon and the County of Bucks…” was separated from the other portion of Wavendon, and constituted a Civil Parish by itself, with a separate Parish Council, Parish Officers, and District Representatives. This, no doubt, is the first step towards carrying out a scheme of sewerage and sew­age disposal and a water supply scheme; but when these come off a portion of Aspley Guise, which lies in the County of Beds. must be included in the area affected by either or both. With the division of the ancient Parish of Wavendon, new officers and officials had, as already said, to be elected, or appointed, for Woburn Sands, and the following now hold office in that new Civil Parish. 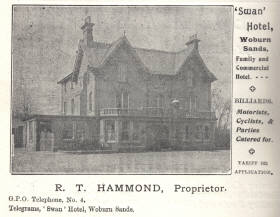 Here is a recently built Meeting House of the above named Society, on the front of which is this inscription:- Friends Meetings have been held in this Parish from about the year 1659. The Burial Ground was purchased 1674.  Hogsty End Meeting House stood here 1675 – 1901. This Meeting House was opened 12 Month 8, 1901.

This place was one of the most important centres of Quakerism, and second only to Jordan’s in this county. The Wavendon parish register affords copious evidence of this, as between 1658 and 1750 there are about 150 entries of burial, specified as those of Quakers, and taking place at Hogsty End. After 1750 none is so indicated, though doubtless many took place, and the little trim and well-kept burial ground of about an acre contains the mortal remains of probably several hundred people. A large number of those interments were of Friends who died elsewhere, even as far off as London. In the registers of adjacent parishes, Quarter Sessions records, and other documents and records, are found evidences relating to the “sectarii tremularii” – e.g.

1659, Friends riding to a meeting at Wandon had their horses confiscated as a punishment for Sunday travelling.
1658 Dec. 9, Joane, ye wife of Robert Trannis, was putt into the ground, by him, a Quaker.
1706 July. Thomas Harry, yeoman, Quaker, dyed being buried in his garden.
1710 Mar. 9, Richard Underwood, bury’d at Hogsty End Meeting House (dying at Aylesbury, in prison.)

The above extracts are from Wavendon register book.  Among those who lie buried here are: Jeremiah Holmes Wiffen, who was celebrated as a poet and scholar, translator of Tasso of Garcilasso: and who died in 1836, at the early age of 41. Also his brother Benjamin Barron Wiffen, who was famous as a Spanish scholar. Another remarkable member of this meeting was Richard How, who accumulated a library of over 5,000 rare and valuable books.

The present Meeting House cost about £1,700, and can accommodate about 500 people. On the occasion of the opening, Sir Joseph W. Pease, Bart., M.P, for Darlington, attended, and presided at the evening assembly. 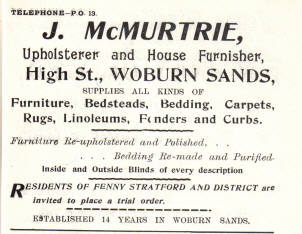